(Isaiah 7-12) Isaiah's Children as a Warning

As chapter 7 begins, the LORD tells Isaiah to go and meet  king Ahaz. Isaiah was told to take his son, named Shear-Jashub, which means, A Remnant Shall Return. We will see how God uses both of Isaiah's sons as object lessons in his prophesies.

When Isaiah arrived before king Ahaz, he told the king that God said He would give Ahaz some kind of a sign to help convince Ahaz of His word. But Ahaz said that he would not test the Lord. It sounds like Ahaz was being humble, but in fact it was the opposite. Yes it's true, the Bible says not to test God, but if He says to test Him, as in the book of Malachai when God says to test Him with offerings so that He could pour out blessings on us, then it's OK. 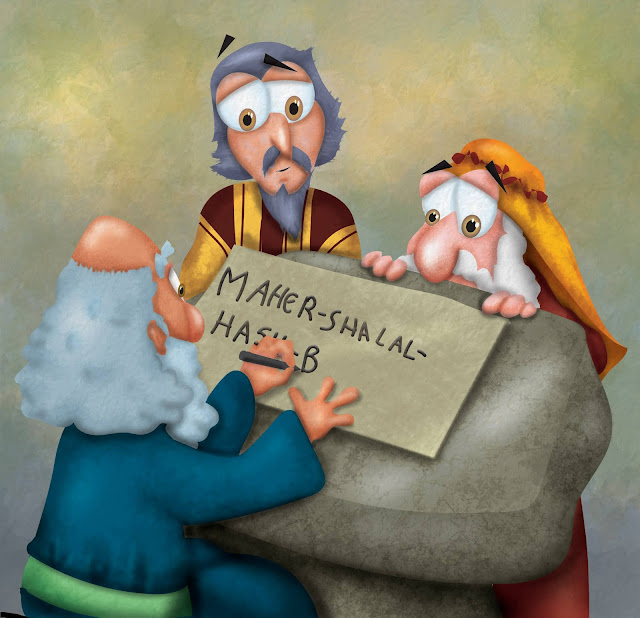 God told Ahaz, through Isaiah, "Very well, then I will send you a sign anyway. Behold, the virgin shall conceive and bear a Son, and shall call His name Immanuel." This is one of the most famous prophecies regarding the birth of Jesus the Messiah in the Bible.  We know this passage speaks of Jesus because the Holy Spirit says so through Matthew: “Behold, the virgin shall be with child, and bear a Son, and they shall call His name Immanuel,” which is translated, “God with us.” (Matthew 1:23)

In chapter 8, God tells Isaiah to take a large board and write the words Maher-Shalal-Hash-Baz which means, Plunder and Carry Away. The word plunder means to steal by force, usually during an invasion. So Isaiah did as God commanded. Isaiah had 2 witnesses. He wasn't sure what this was all about at the time, but he wanted 2 honest men, Uriah and Zechariah, to see him write it so no one could say that he wrote it after the fact.

Soon afterward Isaiah's wife became pregnant with their second son and 9 months later, after he was born, God came to Isaiah and said, "Remember those words I asked you to write on a board last year? That is what I want you to name your son, Maher-Shalal-Hash-Baz." (Mr. BibleHead paraphrase) God told Isaiah that before the baby is able to say "mommy" Assyria would attack Damascus and Samaria. 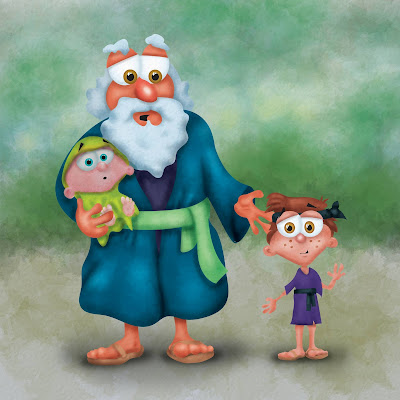 Isaiah went before the people. "See my two sons? God has asked me to give them specific names as a warning to you. Before my youngest son will be able to speak, the Assyrian army will attack and plunder. But my older son is a symbol of hope. There will be an Israelite remnant." A remnant is a small part left over after the large piece of cloth has been cut, but it can be used later. Isaiah said that Judah will be tempted to ask fortune tellers and mediums what would be their fate, but Isaiah said that he is standing right in front of them with his two sons and a message from God. We too can seek guidance through wrong means. God reveals all we need to know. Read your Bible. That's how God speaks to us. In the Old Testament, the people needed a prophet. But now we have God's Word.

Chapter 9 is a beautiful chapter of God's grace and mercy. He gives hope to Judah and to all people through His words. " Nevertheless, the darkness will not last forever. There will be a time when Galilee will be filled with glory. A light will come into the darkness.(Jesus) And the people will rejoice." Have you ever watched a Charlie Brown Christmas?  Then verse 6 will sound familiar to you. It is one of the most recognized prophesies about the coming of Jesus.

For unto us a Child is born,Unto us a Son is given;And the government will be upon His shoulder.And His name will be calledWonderful, Counselor, Mighty God,Everlasting Father, Prince of Peace.

God is not only telling them about what will happen 700 years later, He is giving them a chance to turn from their wicked ways and turn toward Him. He is truly a faithful and merciful God! It doesn't matter how much we have screwed up. God wants us to come to Him. We don't have to get "right" before we come to Him. He is the one who makes us "right". If we accept what Jesus has done for us. (taking our sins and giving His life as a sacrifice, and if we choose to make him Lord (everything we do is for Him) of our life, God promises that the Holy Spirit will come and live inside us and that we will live with Him forever.

Chapter 10 tell about how God used Assyria as a judgement tool (vs.7) against Israel and Judah, but now it is time to judge prideful, godless Assyria. God says that Assyria will waste away like sick people during a plague. (vs.18) Then God reminds His people again at the end of Chapter 10 and into Chapter 11 about the coming Messiah. It is a beautiful description of a savior coming through the line of David.

Chapter 12 is a beautiful song of praise for salvation that comes through Jesus, and only because of the unimaginable grace and mercy of the living God. Have you accepted Jesus as your Lord and Savior? Remember to thank Him always. Because it was nothing that you or I did. It is was Jesus did!

Intro to Isaiah and chapters 1-6

The book of Isaiah was written by the prophet Isaiah. He ministered in Israel and Judah. After Israel was taken over by the Assyrians, he continued to minister only in Judah. He was the prophet during the reign of 4 different kings. 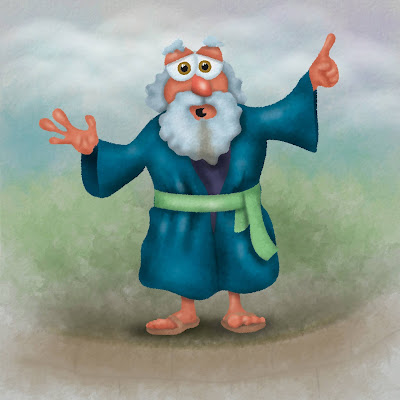 The name Isaiah means Salvation of the Lord. It is a perfect name for him, because as you will see, He speaks a lot about Jesus, even though Jesus wouldn't even be born for another 700 years.

The book of Isaiah and the book of Jeremiah are the two longest books in the bible. He has a lot to say about the poor and the people who are being controlled by evil judges and the government. He also talks a lot about the holiness of God. Do you know what the word holy means? It means set apart. So God is set apart from any other idol that the people worshipped. He is the only true God. When He asks us to be holy, just as He is holy, (1 Peter 1:16) He wants us to be set apart for Him. To obey Him and trust Him and not act like everyone else.

Isaiah was a faithful and bold prophet of God. He spoke very specifically about Jesus, the coming Messiah and about His justice, His promises to Israel, His life and death, and His majesty. Isaiah also told of God’s judgment on The Israelites as they continued to turn from Him. However, Isaiah understood not only God’s judgment but also His salvation, mercy, grace, and compassion. He told of these things and confirmed God’s promise that His people would not be completely destroyed.

In Chapter 2, Isaiah tells the Israelites how He chose them and had a perfect plan for them, but that they turned from Him and worshipped idols. God mentions how prideful the Israelites were 10 times in this chapter, so pride is one of their main sins. God says that he "Opposes the proud, but gives grace to the humble." (1 Peter 5:5) He warned the people through Isaiah that judgement for their acts of prideful disobedience was coming.

Chapter 3 is more about judgement, specifically Jerusalem. And how God himself will make sure that they have no food and water. This may seem a bit harsh, but when we turn from God, He will "take away" anything that will keep us from Him. The Israelites were so self reliant, that they thought they didn't need God anymore. We can get that way sometimes. When we get comfortable because we live in a house, we have clothes to wear and food everyday, we can think to ourselves. "I'm doing pretty good on my own."

In Chapter 4 God, speaking through Isaiah, Gives hope to the Israelite survivors. He mentions the "Branch of the Lord", which means Jesus. Jesus is the Great Hope. He ends chapter four saying that He will be a refuge and a shelter from the storm and rain. "He is our refuge and our shelter" (Psalm 92:1) 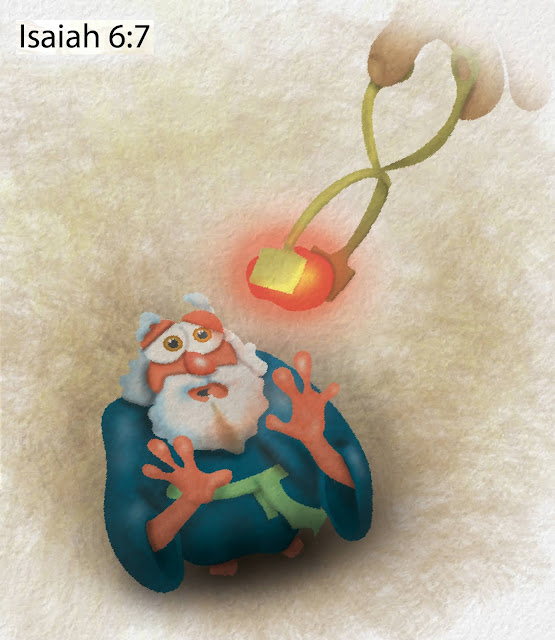 Chapter 5 begins with a story about a vineyard. The vineyard is Israel, and Isaiah tells how God cleared a way for the Israelites. Then they turned from Him. God is reminding the people that He chose them and He worked everything together for their sake. But now He tells of more judgement because they turned from Him.

Chapter 6 takes a turn and Isaiah tells about a day when he saw the Lord sitting on a throne. H was surrounded by angels who kept praising God saying "Holy, Holy, Holy Lord of hosts. The earth is full of your glory!" The earth shook and Isaiah trembled. "I am not worthy to even be here here! I am a sinner! How can I, a man of unclean lips be here before the King of Kings?" Then one of the angels took a hot coal and touched it to Isaiah's lips and declared him cleansed of his sins. Then God asked Isaiah, "who shall I send to the kings with my message?" Isaiah responded. "Send me Lord!". God wants to use us.  Timothy 2:21 says if we are cleansed from our sins and keep ourselves pure, then we can be useful tools in His hands. Wouldn't that be amazing to be used by God!

Next Time, Isaiah goes before the kings.

Posted by MrBibleHead at 6:26 AM No comments: