When we left last time, Samuel had anointed Saul as king. Samuel warned the people that God was not very pleased with them about choosing a king over Him. But that as long as they looked to God first for everything, that He would continue to bless them.

Saul was 30 years old when he became the first king of Israel. He ruled for 40 years. Saul had a son named Jonathan. Jonathan became a great soldier in Saul's army. In one battle, Saul took 2,000 men and gave Jonathan 1,000 men. Jonathan defeated a garrison of Philistines with half the men that his dad had. Saul sent a message out that he had won a great battle against the Philistines. The Philistines got mad and mounted a great attack with chariots and horsemen. Saul and his men got scared and camped at Micmash.
Samuel the Prophet sent a message to Saul. The message said that he would be there within seven days to pray and make a sacrifice to God. Saul waited and waited. But his men began deserting. Some hid in caves, and some crossed the Jordan River and ran. After seven days, Saul was too fearful to wait any longer. "Bring me the burnt offering." he shouted. 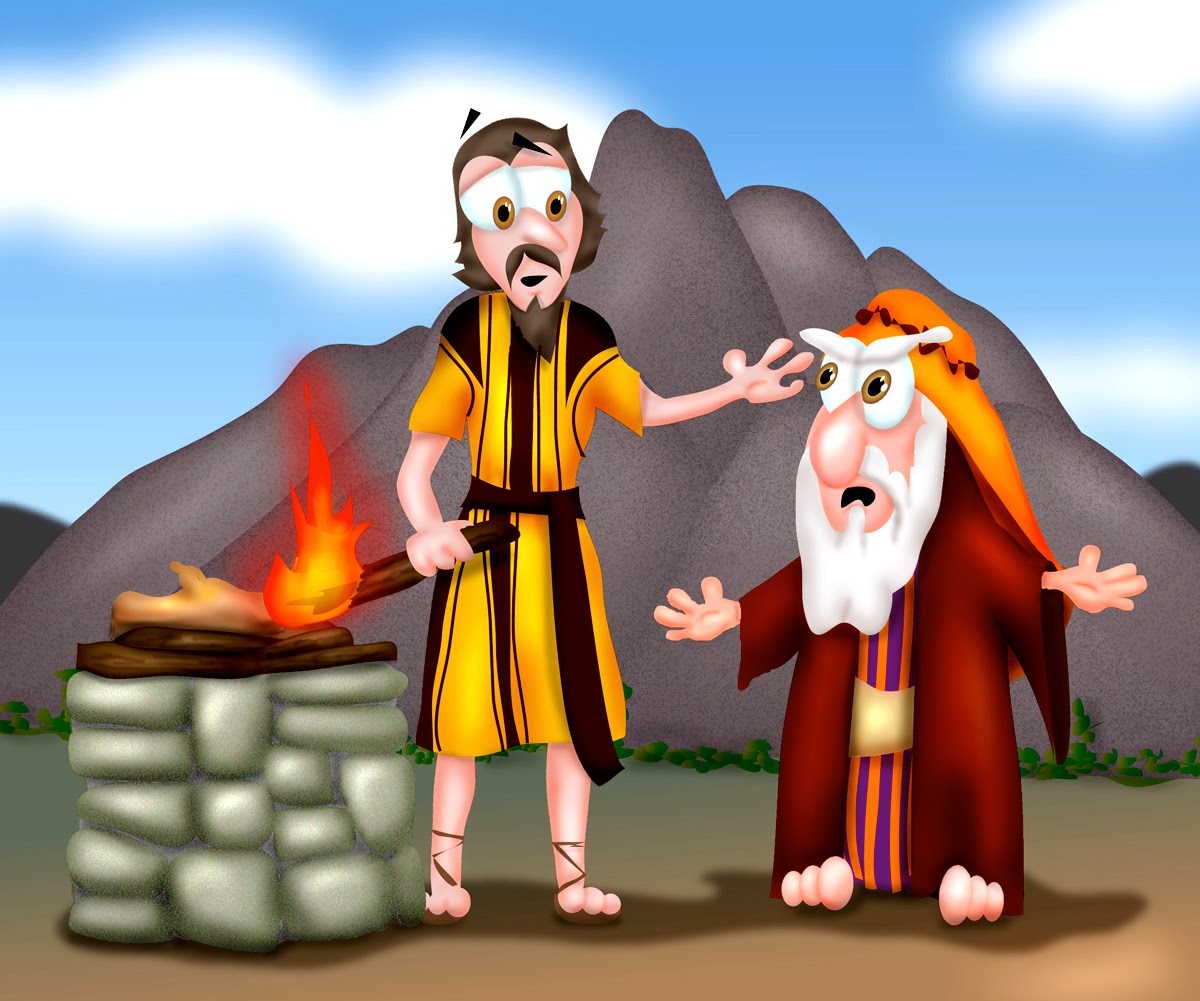 Just a Saul had finished the sacrifice, guess who shows up? Yep Samuel.
"What have you done!?" Samuel asked. " Sacrifices must only be offered up by priests and prophets. That was a very foolish thing to do."
"I didn't think you were coming. All my men were leaving and I thought that the Philistines were ready to attack." Saul replied. Then Samuel told Saul that his disobedience would result in losing the crown.... and that God already had someone after His own heart in mind. Then Samuel left.
There were only 600 men left with Saul. They left Micmash just in time, because the massive Philistine army showed up there and set up camp.  Saul and his army were in Geba, not far from where the Philistines were set up.Without telling his father, Jonathan took one of his servants. They snuck up on the Philistines. Jonathan told his servant that God would be with them. They attacked the Philistines. The Philistine army was so confused, that they began killing each other! Saul's lookout saw something going on and reported it to Saul. Then he saw the Philistine army running off in every direction. Saul knew that he had to get over there to help Jonathan before the Philistines regathered their troops. He called his men together to pray, but it was taking too long, so he said to forget it, and they left. When they arrived. The Philistine army was gone. The Lord saved Israel that day, but the battle was far from over.

In the years that followed, Saul fought against Israel's enemies in every direction. He won battles against Moab, Ammon, Edom and Zobah. The Israelites continued to battle the Philistines.
One day Samuel said to Saul. " I have anointed you as king because God told me to. So now listen to what the Lord wants you to do. He wants you to destroy the country of Amelek because of the evil they did against the Israelites when the left Egypt during Moses' day." Samuel continued. " Make sure you follow these instructions exactly. Destroy everything and everyone. Do not take anything or anyone or any animal. from the land."
So Saul gathered his army. They destroyed most of Amelek. Saul took the king as prisoner and brought back the best sheep, donkeys and cattle and anything else that appealed to them.

God said to Samuel the Prophet. " I am sorry that I ever made Saul king. He has been disloyal to me and has disobeyed me at every turn." Samuel was so upset with Saul that he set right out to confront him. When Samuel finally reached the camp, he asked one of the men where Saul was. Guess where he was? He was out in a field surrounded by all the sheep, goats, and cattle that he took from Amelek and he was building a monument.... to himself!
"I did it!" Saul exclaimed. " I followed God's commands." 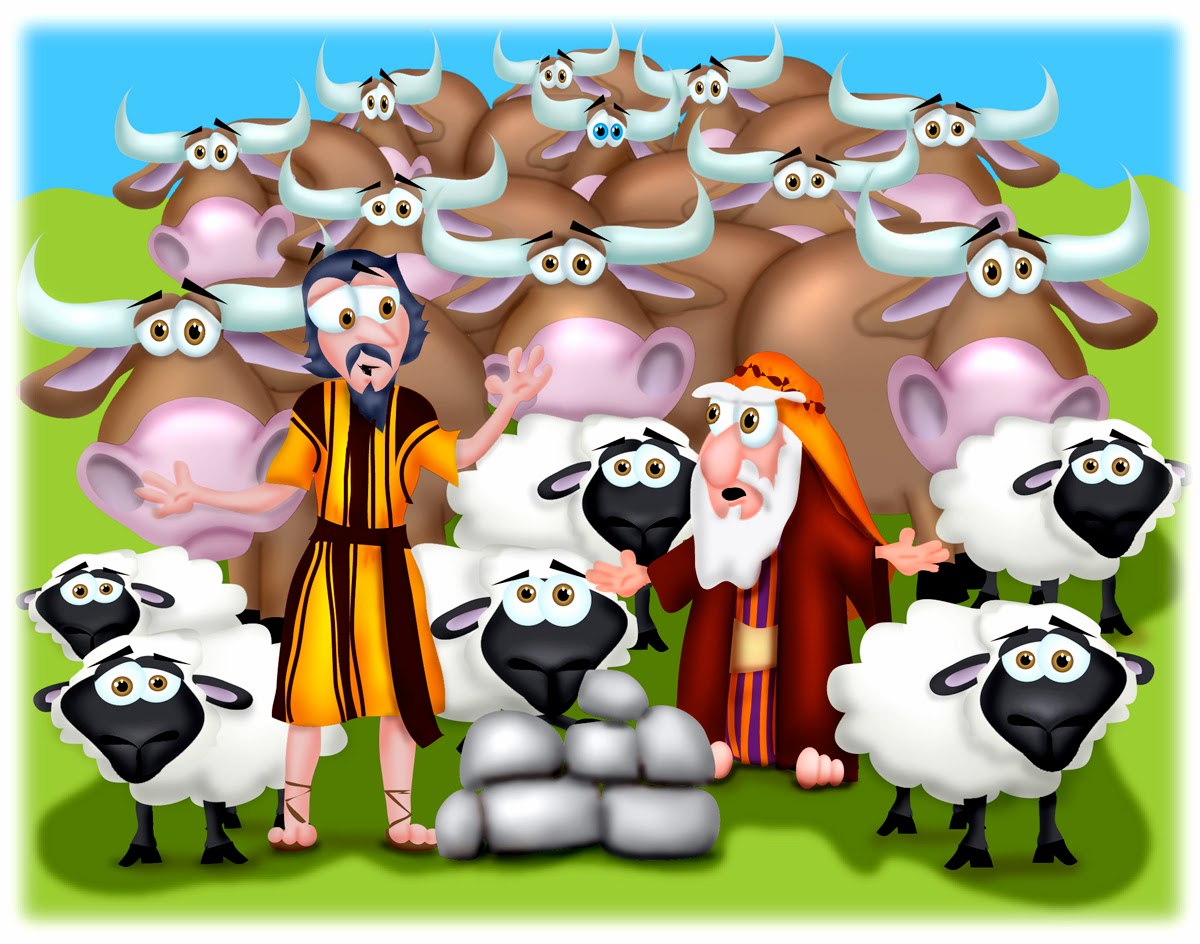 "Then what is all the bleating of sheep and lowing of cattle that I hear?!" Samuel was very angry.
"Oh, I was going to sacrifice them to God later." Saul lied.
"Obedience is much more important to God than sacrifices!" Samuel retorted.
Saul knew he had done wrong. He confessed, but Samuel told him that the since he had rejected the Lord's command..... the Lord will now reject him as king.

We can see Saul's gradual fall away fro God. We can learn from his mistakes. Let's look at his demise:
1. Saul took credit for Jonathan's victory.
2. Saul sacrificed without Samuel. (He thought of it as a magic wand, not as communing with God)
3. Saul didn't pray because it would have taken too long.
4. Saul directly disobeyed God's commands.
5. Saul thought more of himself than God. (When he built a monument to himself.)
We should continually check ourselves. Do I take credit for things I did not do. Do I treat the things of God (prayer and bible reading) like a magic lamp? Do I hurry through my prayers or forget about them altogether? Do I break any of God's commandments. Do I think more of myself than of God? All of these things pull us away from God. He loves us and wants us near. He is always in the same place. we are the ones who pull away.