Last time  the Israelites just found out that God was not going to let them into the promise land because  they doubted Him, but that their children would get to enjoy it. God told the Israelites to turn around and head back into the wilderness. The people were all crying as they went to bed that night. The next morning the people told Moses, “We are ready to go into the promise land today. Let’s go!”
Moses put out his hand to stop them. “God said no,” he said.
“We are going anyway. Are you going with us?” The people asked.
Moses shook his head and pleaded with them to listen to God. “Why are you disobeying God? Again!”
Many of the men grabbed their weapons and headed toward the hills. Moses stayed behind with the rest of the men and the Ark of the Covenant. As the men crossed the hills toward the promised land, two armies saw them and rushed them. The Amalekites and the Canaanites attacked the Israelites and chased them all the way to the next city. 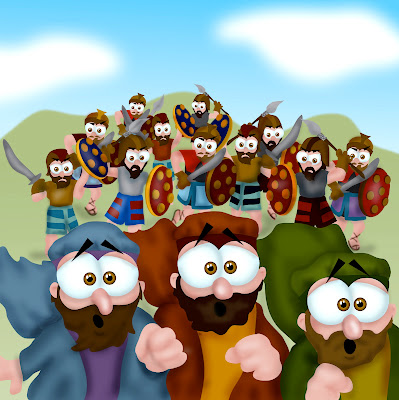 If the people would have obeyed God the first time, they could have taken the land with no problem. But because they disobeyed God, they lost the battle. When we disobey God (sin), we are turning our back on Him and walking away from Him. So whatever we do in disobedience, God is not with us. On the other hand, when we do something in obedience to God, we can do anything! (Phil 4 :13)
The people were not very happy about it, but they turned around and headed into the wilderness as God had instructed.

One day a man named Korah went up to Moses. " Dathan, Abiram and myself have decided that you are not any holier than we are! As a matter of fact, we have brought 250 holy men to represent the people and we think that we can lead the people better than you. After all, you brought us out here into the wilderness to die and you haven’t brought us into this wonderful “promised” land like you said. And to top it all off, you appointed your own brother Aaron to be the High Priest!”
Moses replied. “I am just following God’s instructions. He led us to the promised land but you doubted  Him, and He was the one who chose Aaron. Not me! Tomorrow, I want you and your 250 men to meet me in front of the tent where the Ark of the Covenant is and burn incense to God. Let’s get this leadership thing over once and for all!”
The next day Korah and his 250 men met in front of the Ark with their incense burners. Many of the Israelites came out to support them too. I’m sure it made Moses sad to see so many people against him.
We know that it made God mad because He told Moses that He was considering destroying Korah, the 250 men and ALL the people that gathered with them. 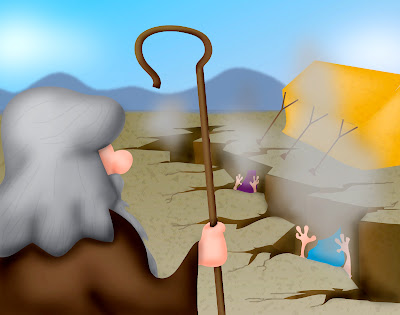 Moses interceded for the people again and God spared the people. However, God did not spare Korah and his men. Moses told the Israelites to stand back as far as they could from Korah. Suddenly the ground opened up like an earthquake and swallowed up Korah and his family. Then the 250 men were consumed by fire!

Do you think that the Israelites got the message? I think I would have! But guess what? The next day the people went to Moses complaining that he killed their “holy” men and that they didn’t believe that God had picked Aaron as the high priest. They had some men of their own that they thought would be better for the job.
“Ok.” Said Moses. “Let’s get this settled once and for all! God said to put 12 staffs in front of the Ark of the Covenant and to write the names of 12 leaders, each from a different tribe and leave them overnight. The staff that has a blossom on it will name the high priest. So Moses took the 12 staffs with the names on them and left them in the tent with the Ark overnight.