The Pride and Prejudice of Haman ( Esther 5 and 6) 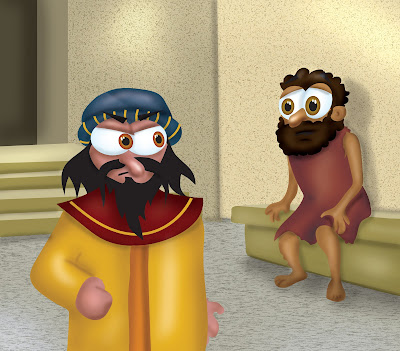 King Xerxes turned to Haman after queen Esther had invited them to another banquet and told Haman to be back again tomorrow. Haman left the palace on cloud nine. The king and queen have included him in their inner circle! He couldn't wait to get home and brag to his family and friends about how important he was. The only thing that interrupted his joy and excitement momentarily was Mordecai who was sitting along the wall of the palace in his sackcloth. He didn't stand or bow for Haman. This infuriated Haman.

But by the time Haman made it home, he was bubbling over with pride and joy. He gathered his friends and family and told them all about how he was not only rich and that he had been promoted to be prime minister, but now the king and queen have invited him to, not one, but two dinner parties! He told them that the only thing that would make this day complete would be to get rid of Mordecai the Jew.
One of Haman's friends spoke up. "Why don't you hire some carpenters to build and set up a gallows that stands seventy-five feet tall tonight, and in the morning, ask the king to hang Mordecai. Then you can enjoy your banquet without any aggravation."
"I love that idea!" Haman exclaimed." With gallows that tall, everyone will be able to witness the hanging of Mordecai the Jew!" So Haman went right away and got his evil plan started.  The carpenters worked well into the night as Haman supervised the operation. 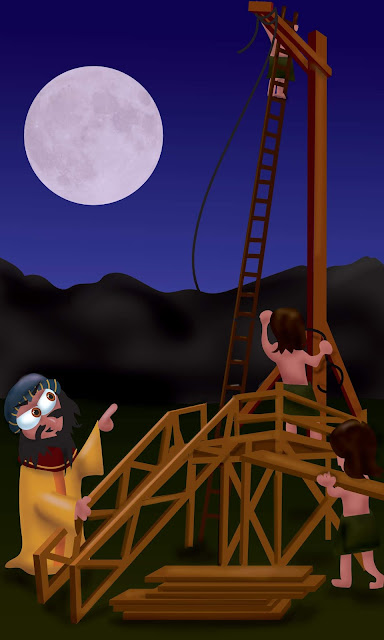 Meanwhile, King Xerxes was tossing and turning all night. For some reason,(God), he just couldn't sleep. Finally, in the early morning hours, he asked a couple of servants to come and read the historical records of the kingdom. "If that doesn't bore me to sleep, nothing will." He thought to himself. So the servants began to read. The king was beginning to get a bit sleepy, when something from the records caught his attention. It was the account of how Mordecai exposed the plot of two palace guards to kill the king.
"Yes, I remember that! Mordecai saved my life that day!' The king shouted as he sat up in bed. "Has anything ever been done to honor Mordecai?" He asked.
"Nothing at all has been done for him. No reward or recognition has been given him" Answered one of the king's servants. Now the king was more awake than ever.

Just then the king heard footsteps in the outer court and asked his servant to go see who was there. Now as it just so happened, Haman had arrived at the palace to ask the king to hang Mordecai that morning. "It is Haman." One of the servants replied.
"Oh good, send him in." The king ordered his servant. "I need some advice."
So the servant escorted Haman into the presence of the king.
"You are just the man I wanted to see." Said the king as Haman cracked a smile. "What should be done for a man that pleases me?" Now Haman's slight smile became a full-face grin. "Whom should the king want to honor more than me?" He thought to himself as ideas of how he would want to be honored by the king danced around in his head.
"First of all," Haman stated, " He should bring out one of the kings royal robes as well as the king's  own horse with the royal emblem on it's head. Instruct one of the king's most noble men to place the robe on the honored person and then lead him through the city square." Haman was really dialing it up now. "Then have that noble man shout out as he leads the horse, 'This is what happens to the man the king wishes to honor!'"

Sometimes our emotions (whether positive or negative) skew our perception of things. Haman's anger and pride blinded him to what was really going on. Ask God yo help you put you emotions aside and focus on the truth. He is the truth the way and the life. (John 14:6)
Next time we will see how the tables were turned on Haman, and how God had everything in control all along.
Posted by MrBibleHead at 10:39 AM No comments: 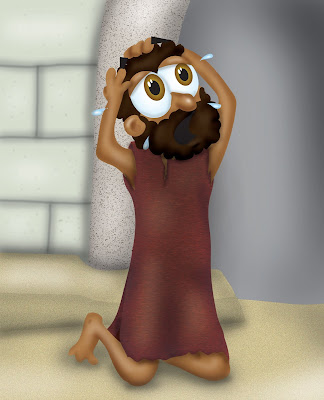 Some of queen Esther's maids saw Mordecai outside the city gates. They returned to Esther and told her how he was dressed and that he was weeping bitterly. Queen Esther sent some clothes with one of her servants for Mordecai to wear, because no one was allowed inside the palace walls in sackcloth, but he refused to wear them. So Esther ordered her servant, named Hathach, to go find out what what distressing Mordecai.
Hathach went back and forth bringing messages to Queen Esther and Mordecai. Mordecai gave Hathach a copy of the decree that called for the death of all Jews to give to Esther. Esther didn't even know about the law and she was shocked and upset. Mordecai urged Esther to go to the king and beg for mercy for her people.
"The whole world knows that anyone who approaches the king without being invited is doomed to certain death, unless the king holds out his gold scepter." Esther explained.
Mordecai returned a message to the queen. "If you do not stand up for your people to the king, someone else will. But it could be certainly possible that you have been raised to royalty for such a time as this."

Have you ever thought that maybe God put you in a certain uncomfortable situation for His purpose? Sometimes we try our hardest to get out of a situation, when God has worked it out to get us there! Don't ask God why.... ask Him what He wants you to do or to learn.

Esther realized that Mordecai was right! "Go throughout the kingdom and ask all the Jews to fast and pray." She told him. "My maids and I will do the same. Then. even though it is against the law, I will approach the king. ...... and if I die..... I die." 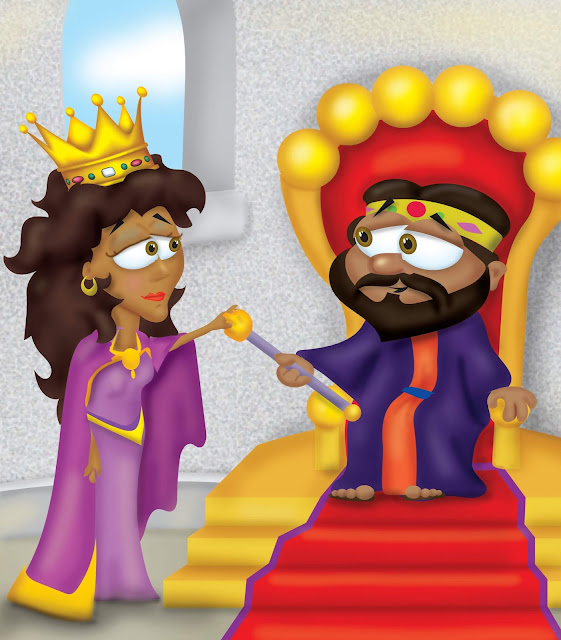 Three days later, Esther put on her royal gown and entered the inner court, which was just across from the king's hall. The king was sitting on his throne and looked in Esther's direction. She felt a lump in her throat and her legs felt weak as she wondered what fate awaited her.......Then..... the king held out his gold scepter to her. She let out a silent sigh of relief and glided toward the king.
Then the king asked her, "What is your request my queen? Anything up to half my kingdom!"
Esther responded, "If it please the king, let Your Majesty and Haman come to a special banquet I have prepared."
The king turned to his attendants, "Tell Haman to come quickly. The queen has prepared a special banquet." So they went and brought back Haman for the banquet. They were all enjoying the banquet when the king turned to Esther and said, This banquet is nice, but please tell me what you really want. I will give you anything up to half my kingdom!"
Esther replied. "This is my request and my deepest wish. If you are pleased with me and you want to grant my request, please come with Haman to another banquet that I will have prepared for you tomorrow. At that time I will explain everything."
Esther wasn't afraid to ask the king. God was working behind the scenes and he put it in Esther's heart to delay her request another day. Next time we will see what God was up to.

Posted by MrBibleHead at 4:48 AM No comments: