King Solomon became well known for his wisdom and his wealth. Kings and queens from all over would come to see these things for themselves. Once the Queen of Sheba came for a visit. "I heard all these stories about your wealth and wisdom." She exclaimed. "But you are even wiser and wealthier than I ever imagined." 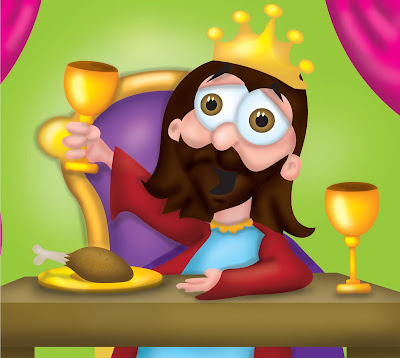 King Solomon was so rich, that even his drinking cups were made of gold! He also built up a huge force of Chariots and horses. Solomon had 1,400 chariots and over over 12,000 horses!

The problem with having all this stuff, is that we tend to lose focus on what is important (namely God, others and eternity), and Solomon fell into the same trap. Not only did he amass large quantities of everything, he also began marrying many women. Most of them were from other countries and worshipped other Gods. God's clear instruction was not to marry foreign women because the women would lead their husbands to worship their gods. But Solomon had lost his focus. God became very angry with Solomon for his heart had turned away from Him. God appeared to Solomon twice to warn him about not obeying His commands, and now Solomon was doing exactly what God had told him not to do.

Being away from God left a big empty space in Solomon's heart. He tried to fill it with possessions, women, parties, reading and many other worldly things... but he discovered that nothing can fill the place in our hearts that is meant for only God to fill. Solomon even wrote a book about all he had done in his life looking for fulfillment. It is found in the Bible. It is called the book of Ecclesiastes.
He finishes up the book of Ecclesiastes with this conclusion: "Obey God, for this is the duty of every person. God will judge all we do, even in secret, whether good or bad." Ecclesiastes 12:13-14

Solomon died when he was sixty years old. His son Rehoboam became king. But because of Solomon's disobedience, the peace that Israel enjoyed for forty years was about to come to an end. Rehoboam got rid of his father's counselors and surrounded himself with advisers that were not very smart. They told him to be the strictest and toughest king that Israel had so far. So when the Israelites approached Rehoboam and asked him to lighten their harsh labor demand and reduce their heavy tax burden, he told them that the taxes would be even higher, and the labor more harsh! 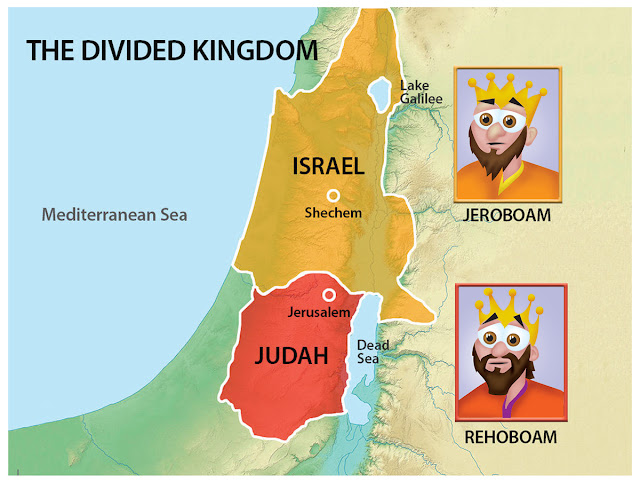 One of Solomon's labor leaders was named Jeroboam. He had been replaced by the new king with a man named Adoniram. But the people stood with Jeroboam and rebelled against the new king. The people made Jeroboam their new king. This split Israel. Now they had two kings. Rehoboam ruled over the southern kingdom which consisted the tribe, Judah. Jeroboam ruled over all the rest of the tribes in the north.

Remember that God promised David that he would always have a descendant on the throne. Well He kept His promise. David's grandson Rehoboam ruled in Judah 18 years. During his reign, Judah drifted farther from God. Jeroboam was even worse! He made golden calves for the people to worship! Doesn't that sound familiar? Moses' brother, Aaron did the same thing when the Israelites got impatient waiting for Moses to come back down the mountain in Exodus 32.
The next several chapters list the kings of the northern kingdom and the kings of the southern kingdom. Most of the kings didn't do what was right in God's eyes and there was a constant civil war between the two kingdoms. However, a king named Asa, a descendant of David, did what was right in God's eyes and Judah began to return to the one true God during his and his son Jehosaphat's rule.

Solomon's sin had repercussions on all of Israel. Do we consider how our sin will affect others? We cannot foresee what the consequences will be, but we can know that the promises of God are true. Obedience to God's rules is not meant to rob us of our fun. It is meant to protect us and to fulfill our exciting purpose which God has prepared for us long before we were even born. If we fill our hearts with the things of God and not with things of this world, our lives will be amazing and exciting!
Posted by MrBibleHead at 12:43 PM No comments: