After Josiah, The next 4 kings were bad. (They didn't do right in the eyes of the Lord)  The kings led the people of Judah away from the Lord. They broke the covenant that God had made with them, which meant that their land would become desolate and the people would be scattered, just as it had happened to Israel 136 years earlier when they were taken over by the Assyrians. The four "bad" kings were Jehoahaz, Jehoiakim, Jehoiachin and Zedekiah. During the third king's reign, King Nebuchadnezzar of Babylon, surrounded Jerusalem. He went into the temple and carried out most of the gold and silver that was in there. He also took many of the officials and the king as captives. The people of Judah had one last chance to turn back to God, but the next king, Zedekiah, continued to turn his back on God. 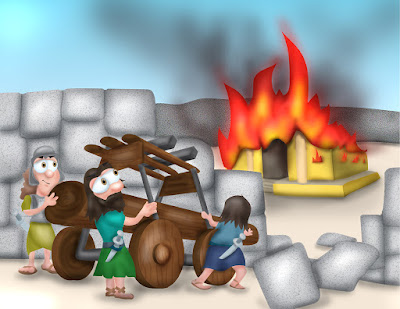 God is the God of 2nd 3rd 4th and so on chances. Don't ever feel like you've crossed the line of forgiveness and that you can't come back to God. Just confess it to God (which means that you agree with Him that is was wrong) and repent. (Which means turning away from the wrong doing and turning back to God)

King Nebuchadnezzar and his troops continued to surround Jerusalem for the next eleven years. The food ran out and all the people fled. As they were fleeing, King Zedekiah was captured. Then Some of the Babylonians went into Jerusalem and destroyed walls of the city and burnt the temple of God to the ground. They took what few Jews that remained back to Babylon and made them servants and slaves. With all the people gone, the wall torn down and the temple destroyed, the message that the Lord had given through the prophet Jeremiah came to pass. 'The land laid desolate for 70 years.' During the seventy years, the Babylonian empire was taken over by Persia.  .... That concludes the book of 2Kings.
The next two books of the Bible are 1Chronicles and 2 Chronicles. These two books are recounts of the two Kings books. They begin with the first King of Israel, King Saul, then David's life is recalled with a few more details and finally King Solomon.  After King Solomon died,  2Chronicles  tells of how Israel split into the north kingdom, (Israel) and the south kingdom, (Judah). Finally the fall of Israel and the fall of Judah were covered. So we will pick up our story seventy years after the fall of Judah in the book of Ezra.

The book of Ezra picks up where 2 Kings left off. Babylon had fallen to the Persians and in the first year of Persian King Cyrus' rule, God touched his heart. The king made a proclamation that all the Jews that were in the land could return to Jerusalem and rebuild the temple. The king also personally brought out valuable items that King Nebuchadnezzar had taken from the temple. Then he ordered that every single item that was taken from the temple be given to the Jews so that they could return them once the temple was rebuilt. Ezra chapter 2 covers a list of all the Jewish exiles that were returning to Jerusalem to rebuild the temple. Chapter 3 describes the first phase of the rebuilding, which was the altar, and then the beginning of the temple rebuild. In Chapter 4, the Jews face opposition when a new king is in charge. The Jews had to put the rebuilding of the temple on hold until the next king, Darius, became ruler of the Persian empire. He reviewed the decree of King Cyrus, and allowed the Jews to resume the rebuilding of the temple. With all the opposition to the rebuilding, it took over 40 years to complete, then Ezra the prophet returned to Jerusalem with many of the Jewish exiles. Chapter 8 of the book of Ezra gives family names of the returning exiles. Ezra made sacrifices in the temple and the people confessed their sins.


Sometimes God touches peoples hearts to fulfill His purposes. Sometimes He touches our hearts too. When God puts something on your heart it is called a burden. He wants you to act. But He won't force you to do anything. If we follow Jesus, we will have burdens placed on our hearts. God may want to bless someone through your actions. And guess what? Then we get blessed too!
Posted by MrBibleHead at 8:45 AM No comments: