So the brothers finally convinced their father Jacob, to let them take Benjamin with them to buy more food. Judah promised his life that Benjamin would be safe.  Jacob prayed for the brothers as they left, but he was very worried.  Why was Jacob so protective of Benjamin? It was because, out of all twelve brothers, Joseph and Benjamin were the only ones born to Rachel. (Rachel was the only woman that Jacob truly loved with all his heart) Rachel had died and Joseph was gone too. Benjamin was all that was left of Jacob’s true love. 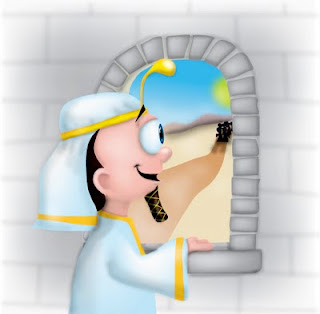 Joseph looked out the window of his castle and saw that the brothers were back. He was so happy when he saw Benjamin with them. He had never met Benjamin because Benjamin was born after he himself had been sold into slavery by his jealous brothers.
"Take those men to my home and prepare a great feast for them.” Joseph told his assistant as he pointed to his brothers.”I will be there at noon to eat lunch with them.”
Joseph’s assistant did as he was told and brought the brothers to Joseph’s home. The brothers were terrified! This was a very unusual thing to do. Foreigners and shepherds were looked down upon in Egypt and would never be invited into an officials home unless he was planning to ambush them. That’s what they thought.
“If this is about the silver that was in our sacks when we got home,” one of the brothers spoke up. “We have no idea how it got there! We even brought it back plus more to buy more food and gifts for Pharaoh.”
Joseph’s assistant smiled and said, “God had retuned your silver to you . Don’t worry."
Just then, Joseph walked in the door. “So you have returned. And with your little brother I see, and how is your father? He asked.
“Our father is fine.” Said Judah as all the brothers bowed before Joseph.
Joseph looked at Benjamin. He looked a lot like their mother. Joseph’s eyes filled with tears and he quickly excused himself from the room and found a place to cry so that no one would hear him. He dried his eyes, washed his face and returned to the dining area where his brothers were being seated. Remember Simeon, the brother that was tied up and left behind as assurance that the brothers would return with Benjamin?  He was released and able to join the brothers for lunch. I’m sure he wanted to ask them what took so long. All twelve brothers were together for the first time ever!
Joseph went and ate in the other room because he could not share a meal with foreigners  although I’m sure he wanted to. All this time, not one of the brothers recognized Joseph as the brother they had sold into slavery 14 years earlier.
After lunch, Joseph talked with the brothers a while and then sent them on their way with the food that they came for. Before they left, Joseph told his assistant to take his silver cup and put it in Benjamin’s donkey pack.
After the brothers had been on their way for a while, Joseph told his assistant to take some armed guards and find his silver cup that had been stolen and bring back the thieves. The brothers were startled as Joseph’s men rode up on them. “What’s going on?” They asked.
“Our master’s special silver cup has been stolen.” Replied one of the guards.
“Search us and our packs.” Said Judah confidently. “We would never repay your master’s goodness toward us with evil.” 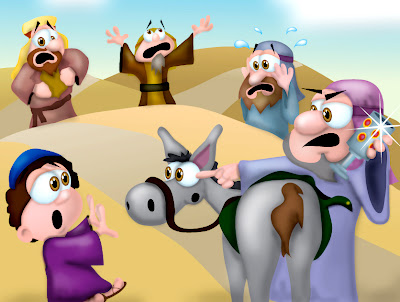 Just then one of Joseph’s men pulled the cup from Benjamin’s traveling pack. The brothers were so upset that they all tore their clothes. Benjamin was in shock! The guards escorted the brothers back into Joseph’s home. The brothers threw themselves on the ground, begging Joseph for mercy.
Judah was the first to speak. “If one of us is guilty lord, then we are all guilty! Lock us all up!”
“No, no, I would never do that.” Said Joseph. “You are all free to go except your little brother. My silver cup was in his possession!”
Judah pleaded with Joseph. “Please, please lord! Let me take his place! It was so hard for my father to let Benjamin go with us. He was so afraid that something would happen to him. I promised my father on my life that Benjamin would return home safely. It would kill my father to lose another son! Please lord! Take me instead!”
We’ll find out next time if Judah gets thrown into prison or not.


Let’s take a look at Judah for a moment.  Judah was the brother who convinced the others to sell Joseph as a slave.  (GN 37:27) Then when they returned home after selling him, Judah lied to his father and told Jacob that Joseph had been eaten by a wild animal . He even gave his father Joseph’s blood-stained coat as proof.(GN 37:32) He was probably the one who came up with the idea to put animal blood on the coat to deceive his father. It is hard to believe that the Judah that is begging for Benjamin’s life, is the same Judah that sold Joseph and deceived his father. Joseph saw that God had changed Judah’s heart! Do you know someone who lies and cheats all the time? Don’t hate them. Pray for them. If God can change Judah’s heart, he can change someone you know. God doesn’t like the lies and the cheating, but he loves the person. He wants us to love them too.  It’s not easy, but God loves us... even when we make mistakes.
Posted by MrBibleHead at 2:08 PM 4 comments: