So now Israel was enjoying a time of peace and unity. However, God's anger burned against Israel. David was God's own anointed king. The people had sided with Absalom because he seemed more kingly to them. He was tall, good-looking and charming. But David was God's chosen king. God was going to discipline the people and He used David's pride and yielding to the devil's temptation to do it.

David knew God's Word. In Exodus 30:12 it says not to count the people because counting equals ownership..... and Israel is God's people. But David gave in to the temptation and called in his general, Joab. After David finished explaining how he wanted Joab to go throughout the kingdom, from Dan in the north to Beersheba in the south, and count the people, Joab replied. "May the Lord allow you to live long enough to see a hundred times the amount of people in the kingdom as there are today. Please do not sin against God by doing this." Never the less,  the kings word prevailed over Joab and the captains of the army. (The captains warned David as well. When there are several objections to your plan, it is time to rethink what you are about to do.) 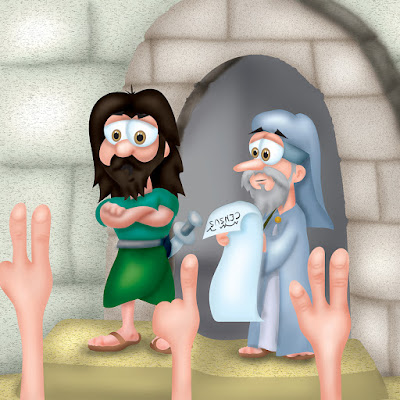 Why did Joab object so vehemently to David's plan. Perhaps he knew how it would affect the people, or he was looking out for the king. Or maybe he was thinking about himself. he was a general after all. Why should he stoop so low as to be a people counter. His pride was at stake! Speaking of pride, by ordering the census, David was feeding his own ego. Israel had grown enormously, he wanted to take the glory and the credit for himself.
Pride is the sin of all sins. It was pride that toppled Adam and Eve from the garden of Eden. Pride is a preoccupation with ones self. What letter is in the middle of pride? I. And what letter is in the middle if sin? That's right....I. Putting ourselves above everyone is sinful pride. Pride also puts God in second place. God should always be first, and at the center of everything we do or say.

So the census was taken. It took about 10 months to count the people. David had 10 months to change his mind and stop the census, but he didn't. God will always give us a way out of yielding to temptation. (1 Corinthians 10:13) When faced with temptation. STOP and pray. God has an exut strategy for you and He will show it to you. Sometimes it is simply saying "no".

It turns out that there were 130,000 fighting men in the kingdom, which translates to 6 million people. Do you think David confidently sat back after the census was complete and said, "That's what I'm talking about!"? No. He did just the opposite. He felt guilty. He knew that he had sinned. 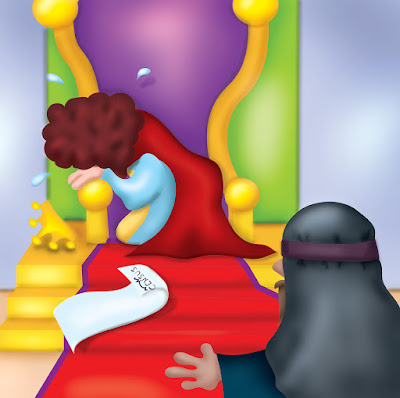 Why do we feel guilty when we sin. It is because The Holy Spirit convicts us. We have Jesus living inside of us (If we have made Him the Lord of our life. Here is a link from a past blog telling how we can have this.  http://mrbiblehead.blogspot.com/2010/03/choosing-god.html). And Jesus would not be content with sin. So it is time to repent. I know, the word repent sounds harsh, but it is simply being sorry and turning from our sin and toward God. And that is just what David did. However, there was still a consequence. When I repent, I do not get off scott free. There is a price to pay. God was going to discipline Israel because of their recent actions, so he sent a prophet named Gad to give David this message.  "Choose one of these 3 punishment and I will do it says the Lord. Will you choose three years of famine, three months of fleeing from your enemies, or three days of severe plague throughout the kingdom."

"This is a desperate situation!" David replied. But he knew how he had to answer.

Next time we will see which punishment king David chose, and why.
Posted by MrBibleHead at 5:01 PM No comments: 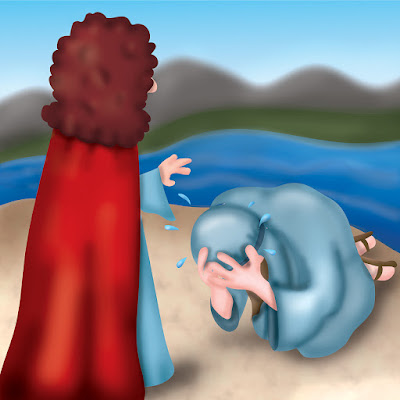 So David started back to Jerusalem to reclaim his place as king of Israel. But now there was major disunity among the people of Israel. Half of the Israelites were supporters of Absalom, and now that he was dead, the people were arguing among themselves. David knew that he had to unify the country again, so he began with a few individuals who had been against him and showed them mercy.
One was Shimei, a man who cursed David as he was running from Absalom. Shimei begged the king's forgiveness. David ignored the advice of his advisors and did not have Shimei or any other person that showed remorse put to death. David showed kindness and mercy to the people of Israel.

The tribes were also fighting among themselves about which one supported David more faithfully. David put an end to the bickering and treated all the tribes equally and fairly. 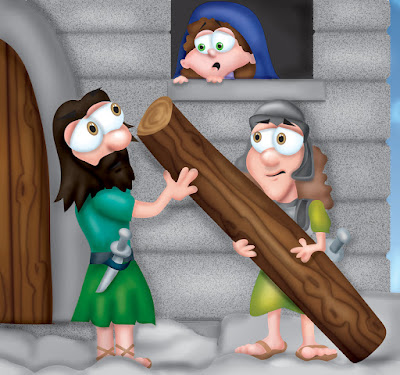 There were some individuals who still were completely against David. They began small revolts against David's leadership. One was Sheba. He blew a trumpet in the streets and shouted. "We will have nothing to do with David. Come on men of Israel! Follow me!" Sheba began to muster up a small group of revolutionaries, but David quickly put and end to it by sending his general, Joab, to take care of Sheba once and for all. Joab chased Sheba to the city of Abel-beth-maacah. The town's people saw Joab and his men ready to knock down the walls of the city to get this one man. They sent a woman out to speak with Joab. " Please don't knock down the walls of our good city. If it is one man you are seeking, we will find him and take care of him for you. Don't worry, you will be sure that we have taken care of him." She pleaded with Joab.
"Ok." He replied. Then Joab and his men waited to see what would happen. Pretty soon, Sheba's head came flying over the wall! I guess they took care of Sheba all right! Joab blew the trumpet and the troops returned to Jerusalem with the news.

David also knew that some of Israel's allies like the Gibeonites were not happy, so he went to them. He made peace with them.  David knew that the Gibeonites had been angry with Israel since Saul treated them badly. But now they were on David's side.

Finally, the Philistines were up to their tricks. They knew that since Israel was in such disarray, it was their opportunity to attack and finally defeat Israel once and for all. The sent in some giants from Gath. A few of them were relatives of Goliath. But David and his men defeated them in several battles.

So God used David to bring peace and unity back to Israel. David set a wonderful example of how a leader can unite his people after a time of disunity, and we can see some things we can do when we are leading, whether it is a small group or a whole country.

Then David sang a beautiful song of praise to God. It is found in 2 Samuel chapter 22. David recalls all the times that God was there for David during his most difficult times. Then David praises God for who He is....not only for what He has done. We should think back in our own lives about all the times God was with us during tough times, and praise Him for who He is, the creator of the universe!.... and out Father who cares deeply for each one of us as individuals.
Posted by MrBibleHead at 10:42 AM No comments: