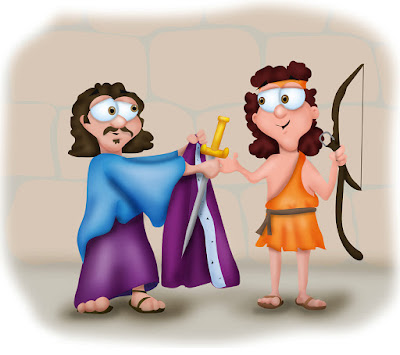 After defeating Goliath with just a slingshot, David stood before King Saul. Saul was very impressed with David and asked him to stay in the palace with him. (Up until this time, David had split his time between playing the harp for Saul and tending his father's sheep)
While at the palace, David met Saul's son, Jonathan. They became instant best friends. Jonathan wanted to show David that he would be David's BFF, so he gave him his robe, sword, bow and belt as a promise. This was really amazing because Jonathan was next in line for the throne, but he knew that David was anointed to be king. Instead of being jealous, Jonathan pledged his friendship to David.

King Saul appointed David as commander over his palace army of 10,000 men. David was very successful in every battle and he became famous throughout the kingdom. People began singing a song about David and Saul. The song went something like this:
"Saul has killed his thousands,
and David his ten thousands" 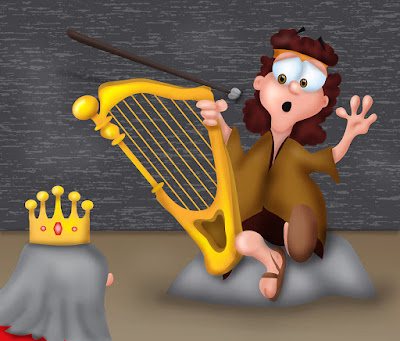 Saul found out about what the people were singing and got very upset. He said, "They are singing about me killing thousands, but they are giving David more credit by singing that he has killed ten thousands! His jealousy got the best of him and the very next day Saul threw a spear at David while he was playing the harp. David had to duck or it would have killed him. Even after this happened, David stood by the king and continued to play the harp in an effort to ease the king's mind. But Saul did the same thing. He tossed another spear in David's direction! Saul intended to kill David. "I wanted to pin him to the wall!" he said to himself.

Finally , Saul transferred David out of the palace and put him in charge of only one thousand men. Much to Saul's dismay, David continued to be successful in his battles against the Philistines. Saul became even more afraid of David's popularity because he knew that God was with him. He was afraid that he would lose the throne to David because David was becoming so popular with the people. Saul needed to come up with a plan....

Saul summoned David before him." This is my daughter, Merab. I will give her hand in marriage to her if you fight and defeat the Philistines in the next battle." (Saul planned on letting David be killed by the Philistines, probably by ordering his army to retreat just at the right time, leaving David vulnerable) But David humbled himself and said that he was not worthy to be in the royal family. Saul ended up giving his daughter, Merab to another man. Saul was disappointed that his plan failed. 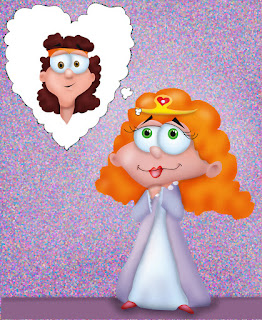 Meanwhile, Saul's other daughter, Micah, was falling in love with David. When Saul was told about this, he was very pleased. This time he worked on David through his attendants. Saul ordered them to talk to David. They told David how much Saul loved him and how he would love to be his father-in-law. So when Saul had David before him again, he said. "David, you have a second chance to become my son-in-law. My daughter Micah has shown a deep affection for you. If you kill one hundred Philistines and bring back proof, I will give Micah's hand in marriage to you." David agreed.

God was with David. He killed 200 Philistines! When he returned, Saul was surprised. He had no choice but to let David marry his daughter. Saul became more afraid of David and continued to plan how he would kill him.

First of all, we can see how jealousy can be so destructive. Jonathan chose to be friends instead of being jealous. We will see how deep that friendship remained throughout their lives. Saul chose to be jealous. His jealousy took over his mind and actions causing him to sin over and over. We can choose.We should choose love not jealousy. Love does not envy or boast. It is not arrogant (1Corinthians13:4) Where jealousy is, there is disorder and sin (James 3:16)

Secondly, we can see God's hand in David's life. God's plans cannot be altered by men. God had told Samuel to anoint David as the next king. No matter what King Saul did, God was with David. Protecting and Guiding him. God has a plan for your life. Get on the same page with God and He will make sure that His plans are carried out through you. He will guide and protect you. The Lord keeps you from harm and watches over your life. (Psalm121:7) Teach me your will Lord, and the Holy Spirit lead me. (Psalm 143:10)

Posted by MrBibleHead at 6:51 AM No comments: