Today we begin another book of the Bible, Judges. Judges were God-appointed leaders that handled the disputes among the people and ruled according to God’s direction. Now that the Israelites had entered the promised land, everything was perfect. Right? Wrong! Hundreds of years had passed and the Israelites had turned their backs on God. They were even worshiping gods made of clay, wood and bronze.
We can look at the Israelites and say to ourselves, “What is the matter with them? God delivered them from slavery and now they were sinning against God!”
If we look at our own lives using the Israelites as an example (Which is what Hebrews chapter 4 says we should do), we can think of how the Israelites were freed from slavery, and how God freed us from slavery to sin when we accepted the sacrifice that Jesus made for us and made Him Lord of our lives.  Have you ever doubted that God wanted the best for you? I have. It’s hard when things are not going right. The Israelites doubted God and they ended up wandering around in the wilderness for 40 years. The promised land for the Israelites was a land of “rest”. We can find rest in Jesus. He even called us to lay down all the hard stuff and find rest in Him. (Matthew 11:28)  God loves when we believe Him and trust Him and find rest in Him.

It’s also easy to forget what God did for us when things are going great. The Israelites were in a land that already had houses built and farms planted. When a new generation of Israelites came along, they took everything for granted. Have you ever just expected things to be good without thinking about God and thanking Him. It’s easy to do. So God let things get bad for the Israelites. Has God ever let things get bad for you so that you remember that He is control and that He alone should be worshipped.
God provided judges to the Israelites to get them back on track. The Israelites would follow God’s leading for a while, but when a judge would die, the people would turn their backs on God again. This happened over and over for hundreds of years.

Today we will be looking at Gideon. God called him to be the fifth judge. There were four judges before him and one was a woman named Deborah. In the days of Gideon, the Israelites were going through a rough time. God allowed the evil Midianites to ruin all the Israelite’s crops, steal their cows and goats and take over all their land. It was so bad that the Israelites had to hide in caves.
Gideon was hiding from the Midianites while he was threshing wheat.  Suddenly an angel sat down and spoke to him. “Hello mighty warrior! God is with you.” (God knows who we can become with Him. Gideon was afraid and hiding from the Midianites. Far from being a mighty warrior!) 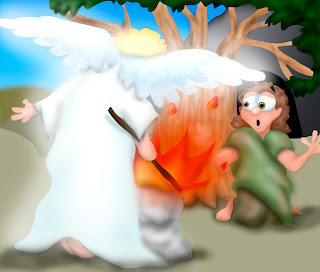 "If God is with us then why isn’t He doing miracles like He supposedly did for our great grandparents.” Gideon snapped back.
The angel didn’t answer him but instead told Gideon that God wanted him to save the Israelites from the Midianites.
“Hold on!” Said Gideon. “ Our tribe is the smallest of all the tribes. My family is the poorest of all the families in our tribe. And I am the youngest member of my family! How am I supposed to save the Israelites?” Have you ever made excuses for not doing what God wants you to do? There isn’t an excuse in the world that God would accept.. God can use the smallest, the weakest or the poorest. (1 Corinthians 1:27-28) God can use you and He wants to use you. Don’t worry! He wants to bless you too.
“God will be with you.” The angel answered. 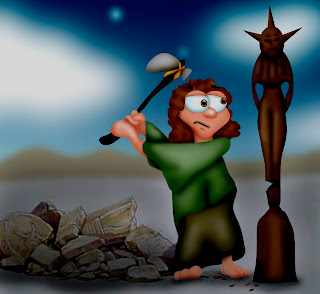 Gideon wanted to make sure that the message he was hearing was really from God. So placed some bread and meat in a basket on a rock. Suddenly the rock burst into flames. The meat and bread disappeared in the flames. Gideon looked up and the angel was gone. Gideon knew that the angel WAS from God. We don’t have to wonder if God is talking to us because we have the Bible. God speaks to us through the Bible.
That night, God spoke to Gideon. “First I want you to destroy the altar that your father has built to Baal (a fake god that the Israelites were worshipping). Then I want you to use the rocks to build an altar to me. I also want you to cut down the Asherah poles (poles used in worshipping Baal) and burn them  on the altar". The next night Gideon did as the Lord had said. Gideon waited till it was late at night because he was afraid of what all the people would do to him if they caught him. 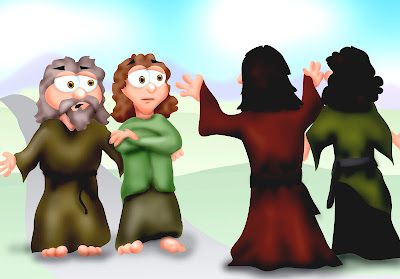 The next morning, all the people saw that the altar to Baal had been destroyed. They knew it was Gideon! They wanted to kill him. They called him and his father out into the streets.
Next time we’ll find what happens.
Posted by MrBibleHead at 3:46 PM 1 comment: