Introduction to Job and (Job 1)

The book of Job is believed to be one of the, if not, the oldest book in the Bible. It was probably written in Abraham's lifetime during the Genesis time period. It is also believed to be written by Job himself as he recorded his own experiences.
The story of Job is a hard one. He suffers many losses and experiences deep pain, but the story is not really about Job's suffering, but more about how we tend to put God in a box. We expect God to think like we do and to act like we do. But His ways are way above our ways and His thoughts are way beyond our intellectual capacity. (Isaiah 55:8-9) 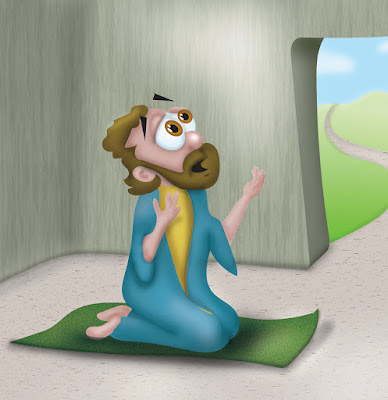 In the land of Uz there was a very rich man named Job. (pronounced jobe) He was not only the wealthiest man in the region, he was also blameless, upright, feared God and shunned evil. Blameless doesn't mean that Job never sinned, it means that he would confess his sins, offer sacrifices and repent. Job had ten adult children, thousands of sheep, camels, oxen and donkeys, and many hired hands to help with the farm and many servants. Job would pray for his family and ask God for forgiveness on a regular basis.....just in case they had sinned.

One day the angels were presenting themselves before God and Satan was there. God looked at Satan and asked him was he had been doing. "Oh, just going back and forth over the earth." Satan Replied. "I have been watching everything that has been going on."
"Well then, I am sure that you noticed my servant Job." God said and then continued. "He is the finest man on the face of the earth. He is full of integrity and will have nothing to do with evil at all."
"Of course not!" Satan retorted. "You shield him and his family from any adversity. You protect them all and you have given Job amazing wealth! That is why he loves you! Take away his stuff and we will see what Job is really made of. I'm sure he will curse you to your face!"
God answered, "Alright! You may test him. Now you have access to all he has. Do what you will, however, do not touch a single hair on his head."

One day a messenger arrived at Job's house. "Job, the Sabeans raided your land! They stole all the oxen and donkeys and killed all your farmhands. I am the only one who escaped to tell you."
While he was still speaking, another messenger showed up. "Fire has consumed the sheep pen. All the sheep and the shepherds have been killed. I am the only one left to tell you what happened."
And while he was still speaking, a third messenger came in. "Three bands of Chaldean raiders have come onto your property. They have stolen your camels and killed all your servants except me."
I'm sure by this time, Job was thinking what else could happen. Sure enough, before the third messenger was finished speaking, another came in with the worst news of all. "Your sons and daughters were having a party at the oldest brother's house when a fierce wind stirred up from the desert. It swept across the farm and leveled the house. All inside were killed. I am the lone survivor to tell you of this devastating news." 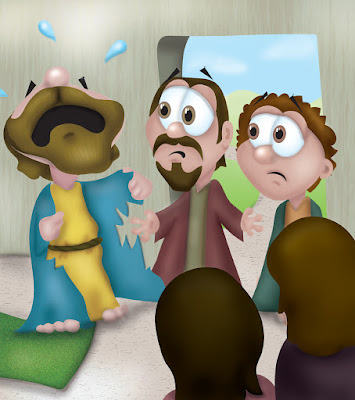 Job stood up, obviously in deep heartbreaking grief. He tore his clothes and let out a loud cry! He shaved his head and fell on the floor before God. "I came into this world completely naked, and I will be stripped of everything when I die." Job cried out and then continued "The Lord has given me everything I have, and now He has taken it all away..... Praise the name of the Lord!"
Even though Job was in deep sorrow, he never sinned by cursing or blaming God.

It is really hard for us to understand why bad things happen. People get hurt. Things are destroyed. Hopes and dreams are crushed. And people die. God knows we are sad when these things happen, and He is right there with us as we grieve through it. God wants us to love Him, obey Him, worship Him and trust Him. Sometimes trusting Him is the hardest when bad things happen. But God delights in our praises, and if we can still trust him and praise Him in the midst of suffering, I'm sure He cherishes that kind of praise even more.

Posted by MrBibleHead at 12:13 PM No comments: