Moses and a Little Help From His Friends

After God supplied the Hebrews with water from a rock, they were feeling pretty good. But that didn’t last too long. A group named the Amalekites came over the hill, ready to attack the Hebrews. The Amalekites were like desert pirates. They would wander about the wilderness until they came upon a town or a people that they could rob and kill for fun. The Hebrews knew that they needed God’s help. Moses told his general, Joshua, to go out and battle the pirates before they reach the women and children.
“Take some of our men and go!” Said Moses. “I will stand on the top of the hill and raise my hands and the staff of God toward heaven in prayer.” 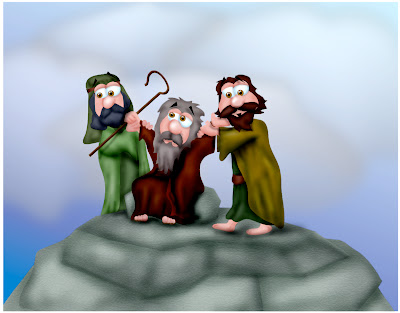 So Joshua and some of the men went out to fight the Amalekites. Moses went to the top of the hill with the staff. He also brought his brother Aaron and a man named Hur. Moses lifted his hands. He raise the staff and prayed. As long as Moses’ arms were lifted toward heaven, the Hebrews would force the Amalekites back into the wilderness. But when Moses got tired and put his arms down to rest, the pirates would start to win the battle by pushing the Hebrews backward toward their women and children.

Moses would raise his arms and the Hebrews would be winning. When he lowered his arms, they would be losing. So Aaron and Hur sat Moses on a rock and stood on each side of him. They helped Moses to keep his arms raised till sunset and the Hebrews won the battle!
God told Moses to make sure that he wrote down what happened that day. So he did. Moses also built an alter at that place and called it  “God is my Banner”. What does that mean? You may be asking yourself. It’s like a flag that men carry into battle. It tells everyone what side they are on.  Moses was saying that they won the battle because they were on God’s side.

Meanwhile Jethro, Moses’ father-in-law who lived in the desert, heard how the Hebrews had defeated the desert pirates and journeyed out to meet Moses. When Jethro came to a familiar mountain that they called The Mountain of God, he set up camp there and sent one of his messengers to go tell Moses that he was on his way. When Moses got the word, he went out to meet Jethro. When they saw each other they hugged and Moses told Jethro all the things that God had done. How God freed them from slavery, how He parted the red sea and how He fed the Hebrews with manna from heaven and water from a rock and now He has delivered them from the hands of the Amalekites! “Praise be to the Lord!” Jethro exclaimed.

The next day Moses was so busy as as judge for the people that he had no time for Jethro or his own family.
“Moses are you the only judge among all these people ?” Asked Jethro.
“Yes.” Moses answered. “I hear their problems and let them know what God has said about it.”
“Moses! You are going to kill yourself trying to serve millions of people by yourself!” Blurted Jethro. “Find a handful of honest men and teach them what God wants. Appoint them each to a certain number of people. Your load will be lightened and you will have more time for God and for your family.”
Moses listened to his father-in-law and trained up some capable judges to listen to the peoples cases. The simple cases were given to them and Moses only heard the difficult cases So he had time for other things that God desired for him. Then Jethro went back to his own town and Moses and the Hebrews packed up for another leg of their journey to the promised land.

When Moses had his hands lifted in prayer and the Hebrews were fighting, I bet they were glad that Moses didn’t get all prideful and tell his brother Aaron and Hur, “I don’t need your help. I got this!” Because they would have lost the battle. We can’t do everything by ourselves. When you turn down help from someone who truly wants to help, you are not only hurting yourself and possibly others but you are taking away a chance for the person who wants to help of spiritual satisfaction and joy. God created us to help each other. The bible has so many verses about “one another”.
The story of the Desert pirates and of Moses’ father-in-law show how we should accept physical help (Aaron and Hur) from others and Godly advice (Jethro).  When we need help, and God sends another person to help us, God is really helping us. We shouldn’t be too full of pride to accept help.

This reminds me of a story I heard. A whole town was flooded. The rainwater was up to the rooftops. A man was sitting on his roof praying. “Dear God please help me!” A while later a boat came by and asked the man if he needed help. He said “No. I’m waiting for God! Thanks anyway.” No one ever knew what happened to that guy. Who does he think sent the boat?

Posted by MrBibleHead at 3:05 PM 2 comments: