So Joseph’s brothers did not recognize him and were bowing before him. They were asking for food since there was a great famine across all the land. Joseph was in charge now, because God interpreted Pharaoh’s dream through Joseph. Joseph stored up a lot of food during the good years, because he knew that the famine was coming. He looked down on his brothers and remembered the dream that he had when he was just a little kid. 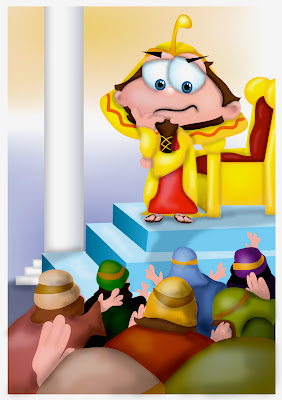 "You say that you have come to Egypt to buy food?” Joseph said harshly as the brothers nodded yes. “I don’t believe you! I think that you are ten spies sent here to check out the land and scope out our wealth.”Joseph snarled.
“No, no, really sir. We are just ten brothers wanting to buy food. Our father and little brother are still back in Canaan waiting for us. We had one more brother, but he is no longer with us.” They said humbly .
“If you are telling the truth, then leave one of your brothers here in prison and bring back your little brother.” Joseph said. “You will leave with food for your family, but this one,” Joseph pointed at Simeon, “will be left behind until you return with your little brother.”
“Please sir!” Rueben begged. “Our father did not send our little brother along with us because of what happened to our other brother (Joseph). It would kill him if anything happened to him.”


Joseph remembered how his brothers threw him into a pit, and the sold him as a slave to passing merchants. His brothers figured that Joseph was probably dead by now. If they only knew that they were speaking to the one they treated so badly, I wonder what they would have done.
“Go!” Joseph commanded. “Or you will all be locked up!”
Simeon was bound in front of his brothers and led off. The brothers got their food and headed home.
On the way back to Canaan, Judah stopped to get something out of his pack that was on his donkey. He was shocked when he saw that the silver that he had used to buy some of the food, was back in his pack!
“How could this be?” Judah shouted. 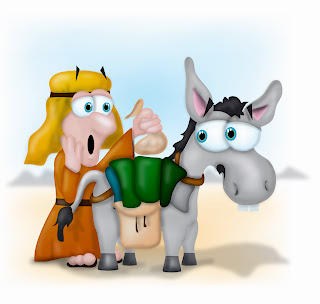 “What?” His brothers responded.
“ Look!” He held out the silver. “It’s all the silver that I paid for my food!”
The brothers were all scared to death now. Through some kind of mistake, Judah ended up with the silver. When Pharaoh finds out about this...... they knew it wouldn’t be good. Pharaoh would accuse them of stealing and have them either killed or imprisoned. They thought that they were being punished for selling Joseph. They had no idea that Joseph had told his servants to put all the silver that the brothers had brought with them to buy food back into their traveling packs.


When they got home and were unloading their stuff in front of their father, Jacob, they saw that all their packs were filled with silver!
Jacob cried out in fear. “What have you done?” And he tore his clothes. (That was a sign of distress in those days. I think mom would get mad if we tore our clothes every time we got upset now. Don’t you?)
“We didn’t do it father!” The brothers answered.
In the back of their minds, the brothers were still thinking that God was punishing them for what they had done to Joseph.
Then the brothers explained all that had happened in Egypt and how Pharaoh wanted them to bring their little brother, Benjamin  back to prove that they are not spies. 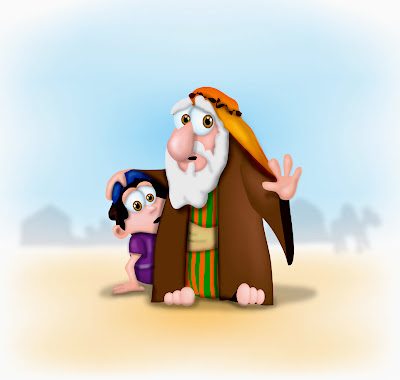 “Never!” Said Jacob. “I lost Joseph thirteen years ago. Now I’ve lost Simeon! There is no way that Benjamin is going to Egypt! I’m not going to lose him too!”
Judah said, “I will not return to you if anything happens to Him. You have my word and my life father”
After weeks and weeks of arguing, the family was out of food again. Finally Judah put his foot down. "We could have been there and back two times in the time it has taken us to resolve this. Let us go father. Benjamin with be safe with me!”
Finally Jacob said alright, but he made them take double the silver and a few gifts with them. The brothers, with Benjamin, headed back to Egypt.... To face Joseph again.


Did you ever do something wrong and then felt like God was punishing you.  That’s how Joseph’s brothers felt. God is in control of everything, that’s true, but a lot of times we are suffering the consequences of our own decision to do the wrong thing. When someone goes to jail for robbing a bank, that is not God punishing them. It is the consequence of a bad choice. We all make bad choices. Things that we know are wrong. Things we know that God doesn’t like. God doesn’t like us to make bad choices, because He knows that there are consequences. He wants the best for us. The less time we spend paying for our mistakes, the more time we have to love Him. That’s what He wants.
Posted by MrBibleHead at 2:08 PM 2 comments:

Joseph is freed from prison (Genesis 41) 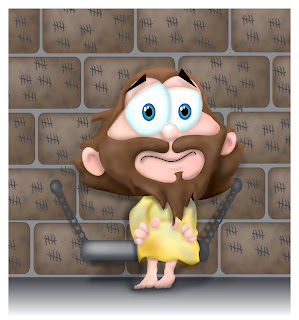 So, last time we left off, the cupbearer, who promised to put in a good word for Joseph to Pharaoh, the king of Egypt, forgot all about Joseph. Joseph spent two more years in prison.
One night, Pharaoh had two dreams. He called his wizards. He called his magicians. He even called his cupbearer to see if anyone could interpret his dreams, but no one could.  Finally the cupbearer remembered Joseph! 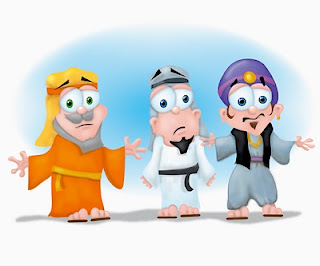 "Remember when you were displeased with me, oh king, and you had me thrown into prison for three days?” The cupbearer asked and the king nodded yes. “Well, I messed up big time. I should have told you about him sooner, but there is a man named Joseph that I met in prison. The baker and I both had dreams the same night and Joseph told us what they meant. He was right both times. I was restored as your cupbearer, and the baker.... well let’s just say that you made sure that he won’t be baking any more bread ever again, just like Joseph said!”
"Bring him to me at once!” The king demanded.
Joseph was given clean clothes and shaved before he was brought before Pharaoh. The king told Joseph about both of his dreams. “Can you tell me what they mean? The king asked.
“No, I can’t” Replied Joseph, much to the dismay of the king.... and the cupbearer. “But God can!” 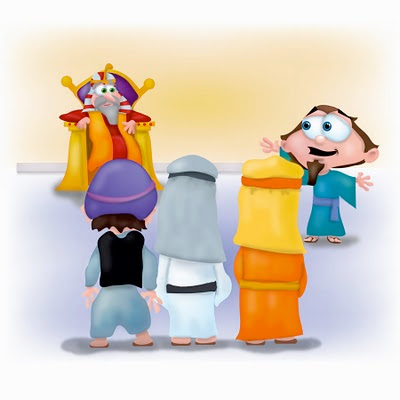 “Your dreams are about a seven year abundance. During this time everyone will have more than enough food. Those seven years will be followed by a seven year famine. During this time your kingdom and surrounding countries will not have enough food. If you do not find a wise man that will store up five percent of the food for the first seven years so that you will have enough during the next seven, your kingdom with perish.” Joseph advised the king.
The king could see that God was with Joseph. He trusted Joseph’s words and his heart.  Can people see God at work in you? Do they trust you because they know that you are a Christian? We should always live our lives so that people will see God’s goodness and His love in us. That is living for God’s glory!
The king not only freed Joseph from prison, but he put him in charge of his whole kingdom! The king put a royal robe on Joseph and a gold chain around his neck. He even put the governor’s ring on Joseph’s finger. Joseph had his own personal chariot! Would’t that be cool?  Nothing was done in the kingdom without Joseph’s approval. During the first seven years while Joseph was in charge, there was an abundance of food, just like God had said. Joseph saved some food in storehouses for the famine he knew that was coming. At this time, Joseph married one of the Egyptian official’s daughters and had 2 sons.
During the famine, people from other countries would travel to Egypt to buy food. Egypt was the only place that had food. Because God was with Joseph, and Joseph obeyed God, Egypt was not only spared disaster from the famine, but it flourished, selling the extra food that they had stored up!
Joseph’s father Jacob and his brothers were living in Canaan and struggling to eat. “Go to Egypt and buy us some food before we all starve to death.” Jacob told his sons. “But leave Benjamin here.” Benjamin was the youngest. Jacob thought that Joseph had died in the desert and he didn’t want the same thing to happen to Benjamin.
The brothers left their father and Benjamin behind and went to Egypt and guess who they had to kneel before to ask for food?! Yep, Joseph! Their little brother that they had sold into slavery 13 years ago was now in charge of who gets food and who doesn’t. Joseph recognized them right away, but the brothers didn’t recognize Joseph.
What do you think Joseph did? What would you have done? We will find out next time :o)
Posted by MrBibleHead at 9:23 PM 2 comments: