One day, David got word that the Philistines were attempting to take over the city of Keilah. David prayed and asked God if he should gather his men (which now numbered about 600) and fight the Philistine army and save Keilah. God said "Yes." So David gathered his men and they defeated the Philistine army and saved the city of Keilah. In the meantime, King Saul heard that David was at Keilah. "Now we have David right where we want him! He is in Keilah, a city with a wall all the way around it. Gather the entire Israelite army! We have him trapped!" King Saul shouted. 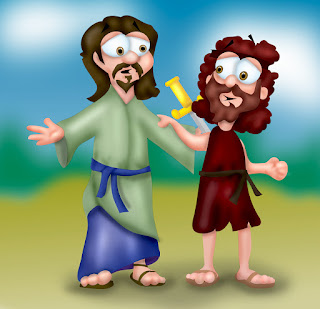 So as the king and his men marched toward Keilah to kill David, David prayed to God and asked him if he should stay in Keilah or leave. God told David that the people of Keilah would turn him over to king Saul, and that he should leave the city.

Wow! David saves the whole city from destruction by the Philistine army, and they are ready to turn on him as soon as they hear that King Saul was on his way!

So David and his men left and headed into the wilderness. Jonathan heard that his father the king was in hot pursuit of David and went to the wilderness to find David and encourage him. "Don't worry." Jonathan told David when he finally reached him. "God has anointed you to be king, so my father can't harm you." 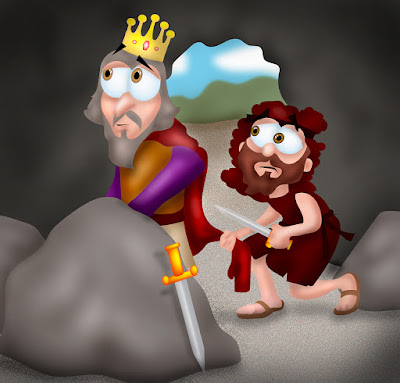 God knows where we are all the time and He led Jonathan to David. David was in need of some encouragement after he found out that the city of Keilah was going to turn against him. God knows where you are right now, physically, mentally and spiritually. And he will equip you with what you need to carry out His purposes.

When King Saul reached Keilah, the people told him which way David went. The king and his army were just on the other side of a large rock that David was hiding behind, when Saul got word that the Philistines were attacking Israel. He gathered his men, left the chase and went back to Israel to fight. Ever since then, that rock has been known as "the Rock of Escape". Then David and his men went deeper into the wilderness and found a cave in which to hide. 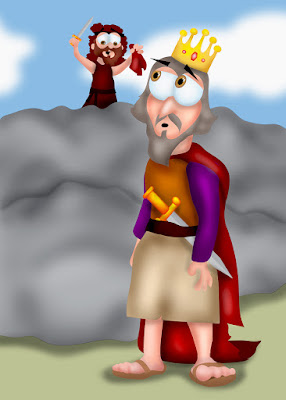 After King Saul chased the Philistine army out of Israel, he took 3000 of his best warriors and continued to chase David. Some men along the way told the king which way David went.  So King Saul headed in that direction. Along the road into the wilderness, the king had to go to the bathroom so he ducked into a cave. Guess what? David and his men were hiding in that very cave! As King Saul was standing with his back to David and his men, some of David's men whispered to David that now was the time to kill Saul and become the king. David knew that this was not God's plan. "Saul is God's appointed leader and it is a serious thing to attack and kill him!" David rebuked his men.
So David reached out and cut off a piece of Saul's robe. Then he told his men not to harm the king.
After King Saul left the cave and was on his way, David came out and shouted, "My lord the king!"
Saul turned and saw David holding something. "Why are you trying to kill me?" David continued. "Don't listen to all those men who say that I am trying to kill you! Look what I have in my hand. It is a piece of your robe! I could have killed you back in that cave, but I didn't. I am leaving all the judging to God. He will punish which ever one of us is guilty. Be sure of this my king. I will never purposely harm you."
Saul called back to David and began to cry. "You are a better man than I David, for you have repaid me good for evil. You have shown me kindness today. I was in a place where you could have easily killed me. But you didn't." Saul continued."I know now that someday you will be king! Please be kind to all the members of my family when you do."
With that Saul went back home and David went back to the cave where he had set up camp.

God says in the book of Romans that we should "overcome evil with good" and that is just what David did.

Posted by MrBibleHead at 4:09 PM No comments: