When we left off, Eli had just fallen backward off his chair when he received news that his 2 sons had died in battle and the the Ark of the Covenant of the Lord had been taken by the Philistines. Samuel had warned Eli about this years earlier. 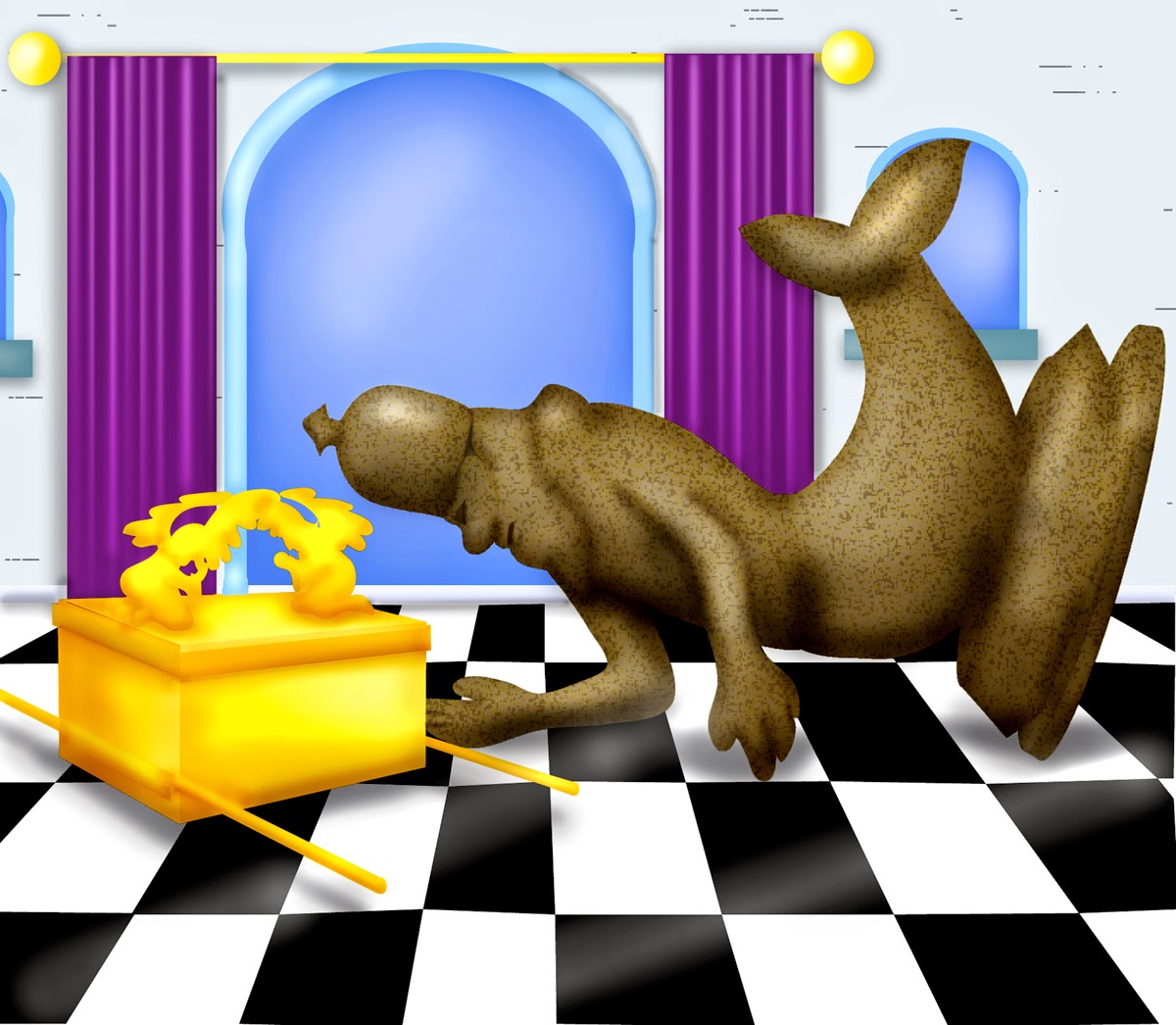 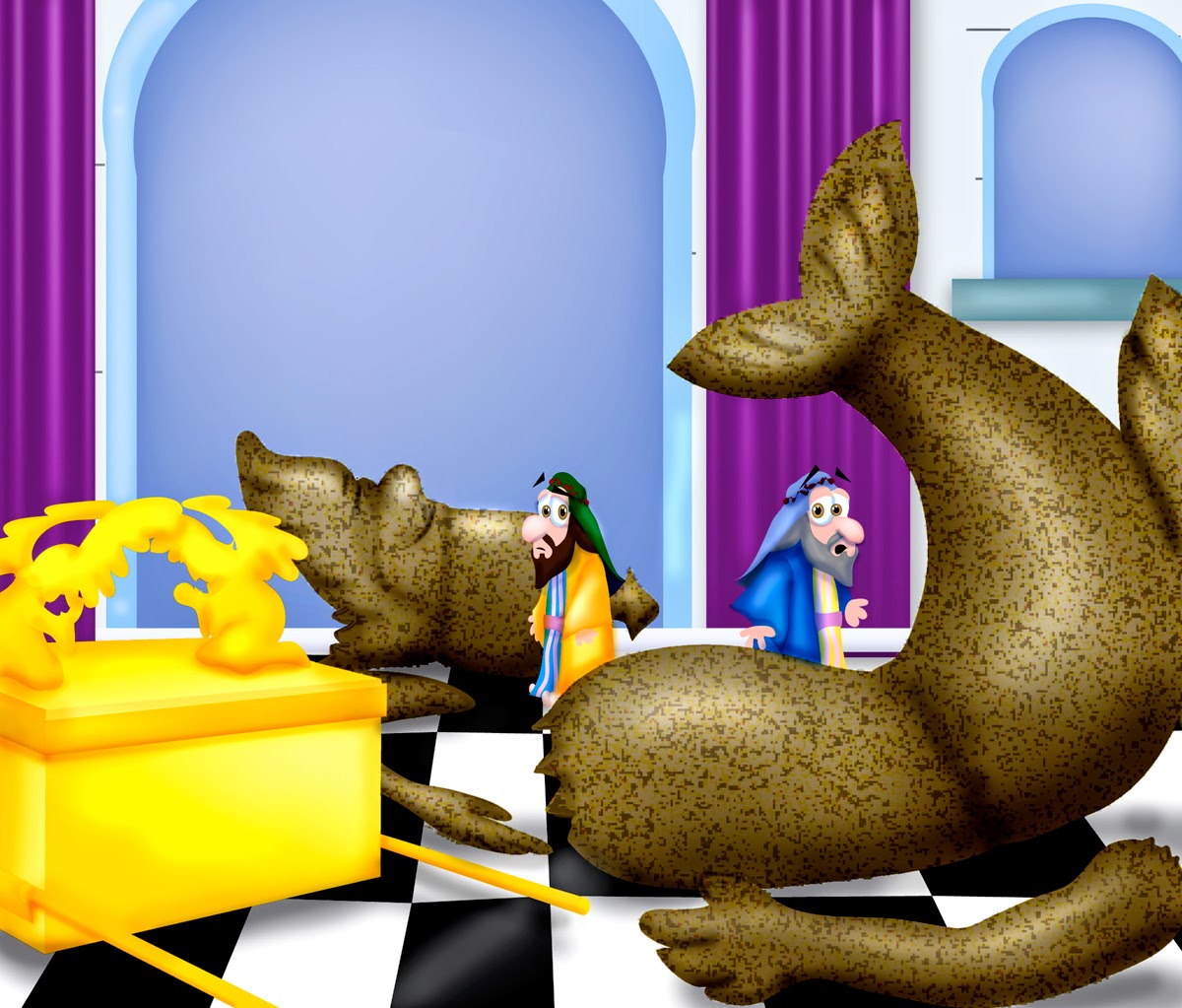 The leaders agreed. “Let us send the Ark to the city of Gath.” They said. And so they did. Pretty soon all the people of Gath were getting sick and there were frogs everywhere! The citizens of Gath thought that they should get rid of the Ark and sent it to the city of Ekron. The people of Ekron had already heard about what happened in Ashdod and Gath, so when they saw the ark coming over the hill to their city, they cried, “No! we don’t want the Ark!” But even before the Ark had reached their city, the people had already begun to get sick and the plague of frogs had started.
The Ark had been moved to five cities in all. The Ark remained in the Philistine territory for a total of seven months. The diviners and the leaders of all the cities got together. “What are we going to do about the Ark?” they asked. “Should we send it back to the Israelites? And if we do, How?”
“Yes, the Ark must be returned immediately along with a guilt offering of gold.” They were told.  "Take two cows that had never been hitched to a cart. Put them in the middle of a field with a cart hitched to them and the Ark along with the offering in the cart. If the cows begin to head toward the Israelite territory, we will know that it is because of their God. If not, then all these diseases and frogs were just a coincidence.”

So these instructions were carried out and sure enough, the cows went strait toward Beth-shemesh (an Israelite territory) Some of the Philistines followed the cows until they reach the border of Beth-shemesh. 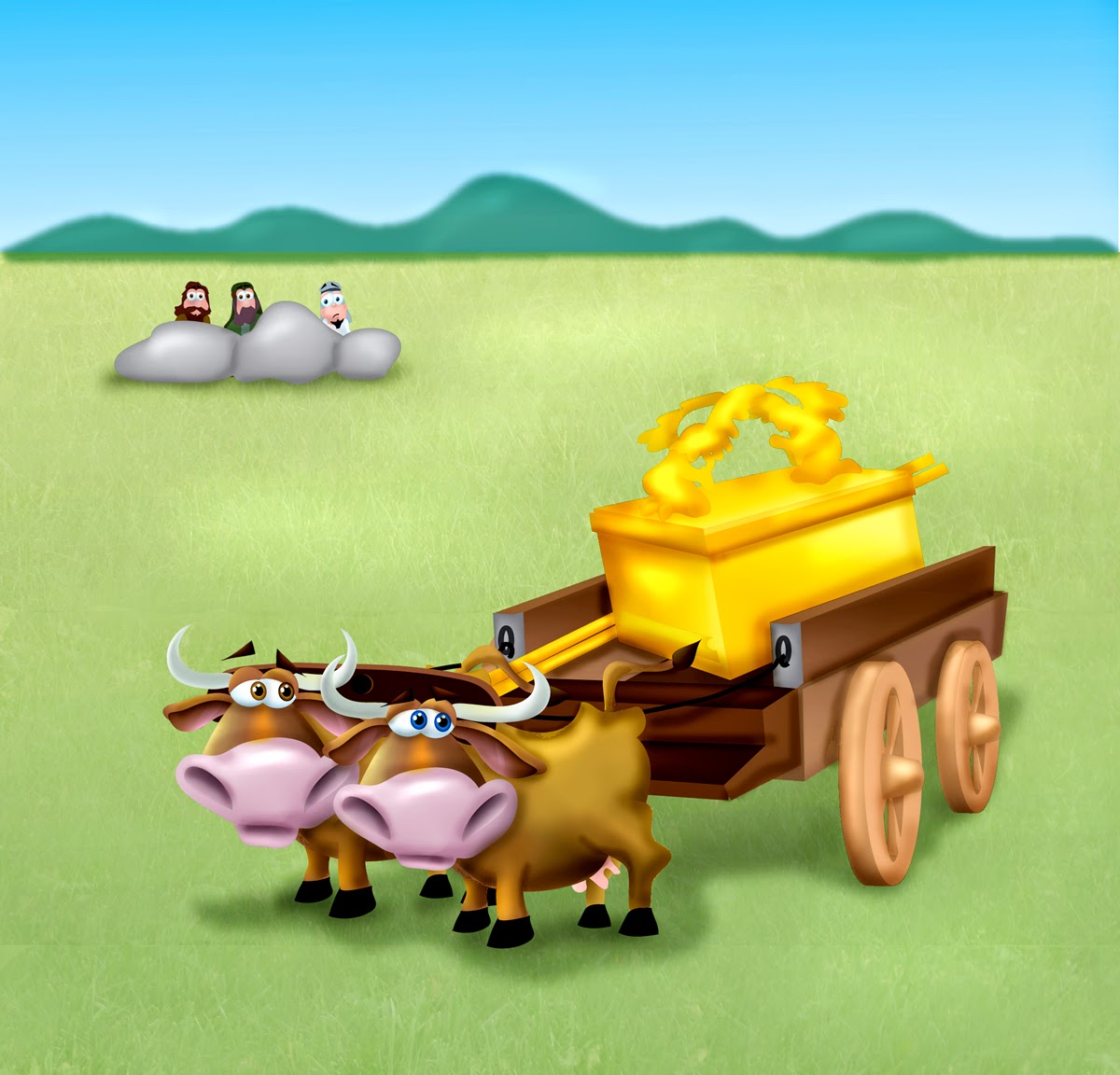 When the Israelites saw the Ark of the Covenant of the Lord returning on a cart being pulled by two cows, they were overjoyed!  The cows stopped at a large rock in a man named Joshua’s farm. The Israelites turned the large rock into an altar to and made sacrifices to God. The  Philistine rulers watched the whole thing, then reported back to their cities.

Then Samuel called all the Israelites together. “Ok, now if all of you are serious about returning to the Lord, make up your minds to obey Him and get rid of all your idols. Then He will protect you and rescue you from the Philistines.”
So the people made the decision to obey God and eliminate the idols in their lives. Then they fasted and confessed that they had sinned. Samuel sent out a message for everyone to come to  the city of Mizpah. There they prayed and offered sacrifices to the Lord. The Philistines heard that all the Israelites were in one place so they decided to attack. When the Israelites saw the Philistines coming over the hill they cried out to Samuel. “Plead with the Lord to save us!”
Samuel prayed. A loud voice came from heaven and confused the Philistine army. They were defeated that day and The Israelites lived in peace for the rest of Samuels life.


We can learn a few things from this chapter in the Israelites history.

(1) God does not want us to put anything before Him. These are called idols. Just like the Philistines had their cement god named Dagon, the Israelites had other things that they had put in place of God. We do it as well. Do you ever think about praying, or reading the Bible, then decide to do it later because you wanted to watch TV, play a game or do some stuff on the computer? That is an idol. The first commandment says that we should not put anything before God.

(2) When Samuel called the people to return to God he had them do some things.
(a) Make a decision to obey God and put Him first in everything.
(b) confess that they had sinned.
If we feel that we are far from God, it could be that we have sinned by putting God second. Confess that sin and turn from the sin and toward God in obedience. This is called repentance.
Posted by MrBibleHead at 1:19 PM 1 comment: