David Hears About Goliath and the Reward (1Samuel17a) 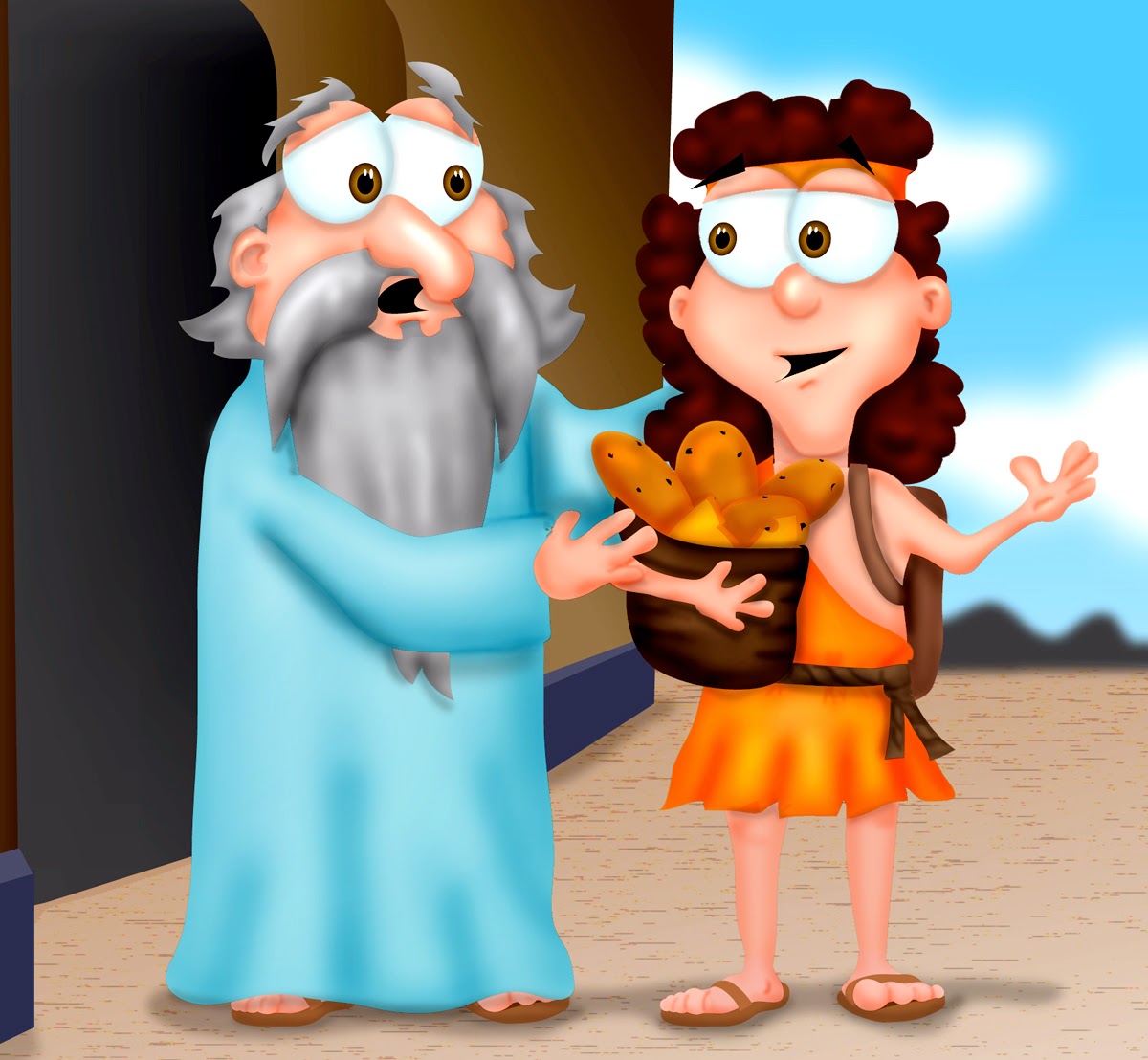 So David worked for the king as well as caring for his father's sheep. He would travel back and forth
between his home and the palace. While he was home, the Israelite army had gathered to battle the Philistine army. The Philistines had set up camp just outside of Judah. So the Israelites set up on an opposite hill with a valley between the armies. David's three oldest brothers had already gone ahead to join the army to fight the Philistines. As he was getting ready to go back to king Saul, David's father gave him some grain and bread to take to his brothers and some cheese to take to their captain. He also asked David to see how they were doing and to bring back a letter from the brothers.

When David arrived at the camp. The Israelite army was just leaving for battle. But today would be the same as the last forty days. The two armies would be on opposite sides of the valley. One of the Philistine soldiers would come out and stand between the armies and begin taunting the Israelites. This was no ordinary soldier however. His name was Goliath and he was nine feet tall! He was an  honored champion among the Philistines. He wore a bronze helmut and had a spear on his back. The head of the spear alone weighed over fifteen pounds. He also had an armor bearer in front of him with a huge shield.
For forty days, twice a day, Goliath would strut in front of the Israelite army and shout at them. "Do you need a whole army to settle this?" He would sneer. " Choose someone to fight for you, and I will represent the Philistines. We will settle this dispute in single combat. If your man is able to kill me, then we will be your slaves. But if I kill him, you will be our slaves! I defy the army of Israel!" Goliath taunted. "Come on! Send out someone who will fight with me!" 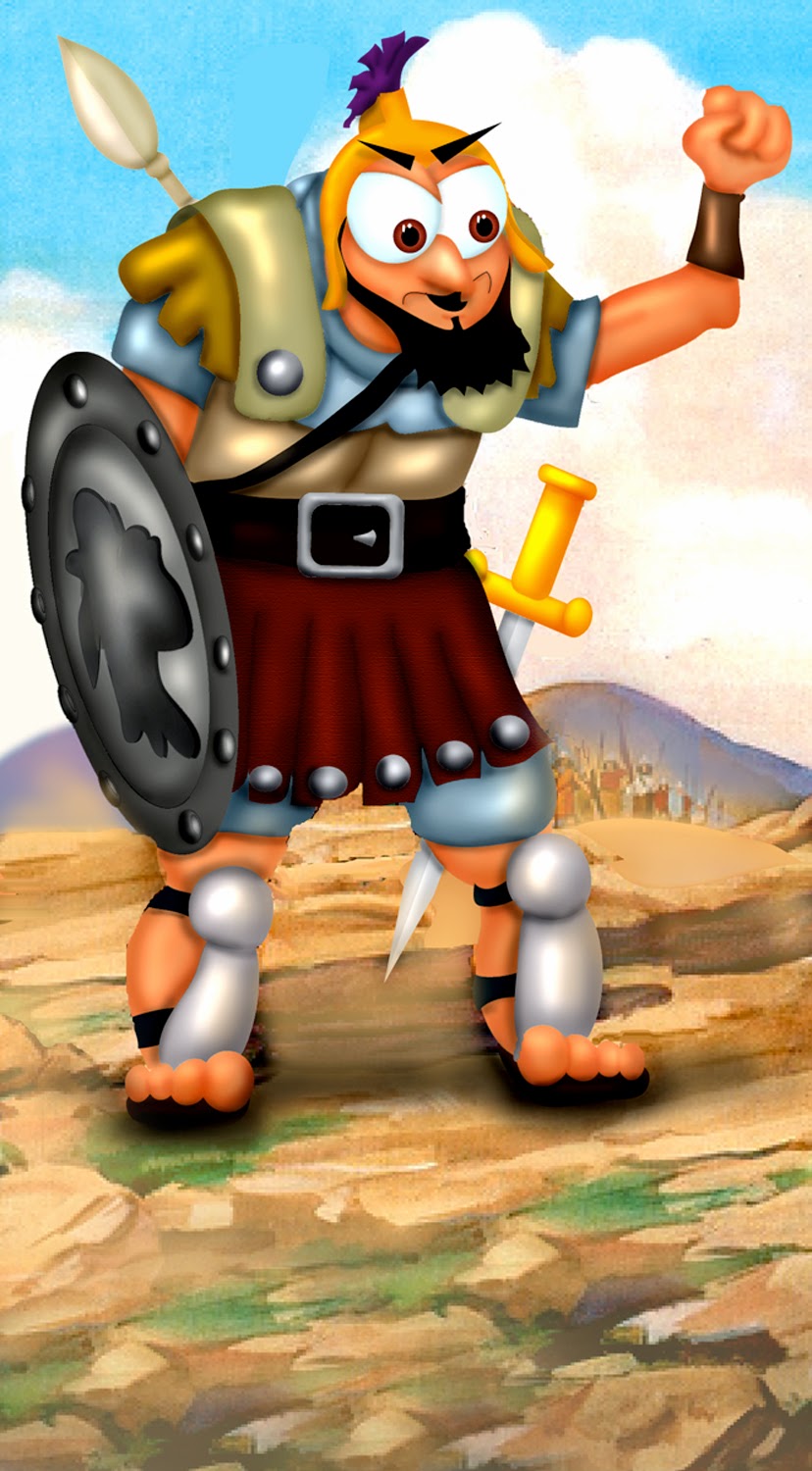 King Saul and the Israelite army would shake with fear every time Goliath would come out. Many of them ran away in fright. David was going toward the battle. Some of the Israelite army were grumbling among themselves as they were headed away from the front lines. "Have you seen the size of that guy?  They asked each other. "Even with the king's huge reward, there is no way I'm fighting that guy!" David was curious about this huge reward, so he stopped one of the frightened  men and asked him about it. "Yes, the king has offered a huge reward to any man that kills the giant." The man continued. "King Saul will give that man one of his daughters in marriage and the family of the man who kills the giant will never have to pay taxes again."

David went a little farther and asked a couple more soldiers who were standing near the front lines. "What will the man receive for killing this Philistine and putting an end to his abuse of Israel?" David asked. "And who is this pagan Philistine anyway, that he is allowed to defy the armies of the living God?" Some of the soldiers answered him. "What you have heard is true. The family of the man who kills the Philistine will be exempt from taxes forever, and that man will marry one of the king's daughters."

But David's older brother Eliah, was nearby. He saw David and heard the questions that he was asking about the reward. "What are you doing?" Eliah asked angrily. "You are supposed to be tending to those couple of sheep on the mountainside away from everyone! You don't belong here and you certainly don't need to know about the reward for killing the giant! Go home!"
"What did I do now?" Asked David. "I was only asking a question." Eliah walked away in anger and David continued to ask questions. Soon king Saul heard that David was inquiring about the reward and he sent for him.

Did you notice David's response to Goliath's taunting. He had the right perspective. David saw the Israelite army as God's army. He knew that God was on their side. He heard Goliath's threat as a threat against God, not just men. Don't be afraid to stand up for what is right. God is on your side. (Romans 8:31) God did not give us a spirit of fear. (2Timothy1:7) Do the right thing and God will be with you. (Deuteronomy 6:18)

Posted by MrBibleHead at 5:04 AM No comments: