"I am Going to send fire down from the sky and destroy the cities of Sodom and Gomorrah!" God told Abraham.
"Please, God." Abraham pleaded . " My nephew Lot is a good man. He and his family are living in Sodom. I ask you to spare the city."
"There is just too much evil there. I cannot spare the city. But I will save Lot and his family." God answered.
The next evening, God sent a couple of angels to the city of Sodom. They found Lot sitting at the gate of the city. Lot saw the men/angels and knew they were special. "Come home with me for the night. I will give you a hot meal and a bed." Lot said. At first the men said no, but Lot insisted and they agreed.
"You have to get you family together and leave this evil city." One of the angels told Lot after they had gone back to Lot's house. Lot's wife and his two daughters were there and heard as the angel continued. " Sodom is an evil city and is has been marked for destruction by God himself. If you have any other family members, like sons or son-in-laws..... let them know!"
Lot's wife said, " Be careful and hurry back." as Lot ran off to tell his sons-in-law about what God had in store for the city of Sodom. When Lot returned home he told his wife and daughters that he couldn't convince the sons-in-laws to leave Sodom because they thought he was joking.
One of the angels shouted, "OK, well it's time to get going!" But Lot and his wife started to look around at everything they had. Lot was rich and they would be leaving a lot of stuff behind.
" I can't believe it! You guys are worried about what you are leaving behind! If we don't leave right now...." The angel said as they grabbed Lot and his wife by the arm."... you will be burned up with all your stuff! Just start running toward the mountains and whatever you do, don't stop and don't look back!" The angels had to pull Lot and his family out of the house.
"There is a small city named Zoar." Lot told the angels. " The mountains are quite far and it would be hard to live there. Can't we just go as far as Zoar and stop there?"
"OK." said the angel, " Zoar will be spared and you can start a new life there. But get there quickly, because as soon as you get to Zoar, fire will fall from the sky and destroy the cities of Sodom and Gomorrah!"
Lot, his wife and two daughters ran a fast as they could, remembering not to stop and not to look back. As soon as they reached the city gates of Zoar, Lot and his family could see the sky brightening and they knew that fire was falling from the sky behind them. Lot and his two daughters continued to head into the city and not look back, but Lot's wife stopped and looked behind her. and she became a pillar of salt! 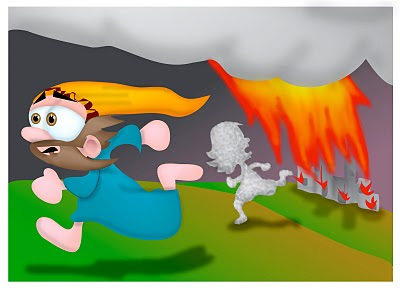 Abraham got up early the next morning and stood on top of a hill. He looked down toward Sodom and saw very thick smoke coming from where the city once was. He knew that his nephew was safe, because God promised to spare him and God always keeps his promises.
Wow! What a story! We can learn a few things from Abraham, Lot and Lot's wife.
1. Abraham was asking God to spare his nephew's life. We can talk to God! Isn't that amazing that we can talk to the same God that Abraham talked to. The same God that created the earth!
It's called PRAYER. When we are praying, we are talking to God. When we are talking to God, we are praying. We can pray for other people. God wants us to pray for others.
2. Lot's son-in-laws didn't believe Lot. Why? Probably because Lot had not told the truth all the time. We have to be careful not to lie. Because then people won't believe us when we tell them the truth.
3. Lot and his wife almost didn't get out in time because they were looking at everything that they were leaving behind. Because we are in God's family now, we can't live the same way that we did before.
4. Lot's wife looked back and she became salt. She looked back with her eyes and her heart. This word looked means "longed for". She wanted what she left behind. If we keep looking back at what we can't do or can't have now that we are Christians... we will miss what God want for us and what purpose He has for our lives.
TRY THIS: Put a penny on the floor at the base of a wall. Now you to the opposite side of the room. Start walking toward the penny, but look at something on the wall behind you. ( a picture of a clock etc...) Now try to pick up the penny while you are still looking backwards. How did you do?
Posted by MrBibleHead at 9:37 AM 4 comments:

Remember last time... God told Abraham to look at the stars. God promised that Abraham would have more descendants than the stars. Beginning with a son. Well... twenty years later God reminds Abraham of that promise. Imagine waiting twenty years! But this time God told Abraham that it would happen in a year. I'm sure Abraham felt much better, but he laughed because he was now 99 years old. "You mean I will have a son when I am 100 years old?" asked Abraham.
"Yes!" said God, "and from now on your name will not be Abram... it will be Abraham." The first 99 years of his life.... Abraham's real name was Abram. (Which means honored father) Now God changed it to Abraham (which means father of many).
Later that day, Abraham was Looking out his tent and he saw 3 men walking along. He ran out to them and offered them dinner. When they said yes, Abraham ran back and asked Sarah (his wife) to throw together something good to eat for their 3 guests. Abraham brought them out some food and ate with them under a tree. 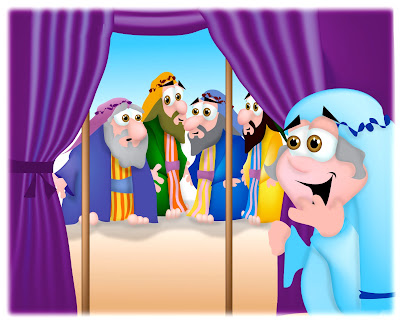 "Where is your wife Sarah?" One of the men asked.
"She's in our tent." Abraham replied.
"We will be back at this time next year, and by the time we return, Sarah will have had a son."
Sarah was listening to the men from the inside of her tent. She laughed when the men said that she will have a son. The men heard her and told her that she shouldn't laugh because nothing is too hard for God. They were right. Sarah had a son the next year. Abraham and Sarah named him Isaac, just as God told them to.( Isaac means, laughs)
Sometime we have to wait . It is hard to wait. It seems like the more we want something.... the longer the wait. Have you ever counted down the days till Christmas? It seems like forever! When God makes a promise, He always keeps it.... but sometimes it is not right away... and we have to wait.
Before the men left that day, they were wondering wether or not to tell Abraham some disturbing news. They decided to tell him.
"The city where your nephew Lot is living will be destroyed because it is too wicked.
After the men left, Abraham prayed. " God please spare the city because not everyone in that city is evil."
God said that if there were 10 good men in the city, He would not destroy it. But there were not even ten good men.
The name of the city was Sodom and next week we will see if Lot and his family get out of the city before it is destroyed
Posted by MrBibleHead at 12:04 PM 3 comments: