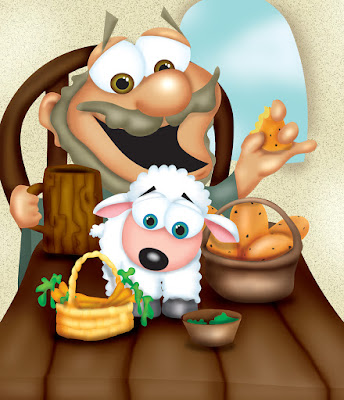 Last time we saw how David messed up....big time! So God sent his prophet, Nathan, to confront King David about the bad choices he made. Remember Nathan? He was the prophet that told David that he would not be the one to build the temple of God. This time, Nathan has come to tell David a story. The object of this story is to make David think, and take a look at himself. Here is the story that was told to David by the prophet Nathan.

There were two men in a certain town. One was rich and one was poor. The rich man owned many sheep and cattle. The poor man owned nothing but a little lamb that he had worked hard to buy. He raised that little lamb and it grew up with his children. The little lamb ate from the man's own plate and drank from his cup. He cuddled it in his arms like a baby daughter. One day a guest arrived at the home of the rich man. But instead of killing a lamb from his own flocks for food, he took the poor man's lamb, killed it and served it to his guest.
When Nathan finished his story, David jumped up. He was so mad! He said "Any man that would do that, deserves to die. He should repay the poor man four lambs for killing his and having no pity."
Nathan pointed at David and said. "YOU ARE THAT MAN! The God of Israel says, " David, David, David, I anointed you king of Israel and I saved you from Saul on more than one occasion!  And I would have given you much, much more. Why have you done this horrible thing? From now on, you will have many family troubles. Some of them even ending in death."
When Nathan finished speaking, David cried out and confessed to Nathan, "Yes, yes, yes! I have sinned against the Lord!
"Well, the good news is that the Lord has forgiven you." Nathan said. "There will be death in your family, but it will not be you. The Lord still has many plans for you." Nathan continued, "Do you see what a horrible thing this is against God? Now the enemies of God will have great opportunity to despise and blaspheme Him!" 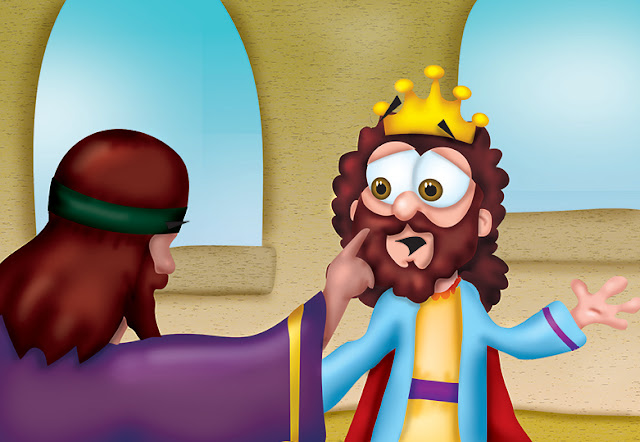 Do we ever think about how our actions reflect on God? Other people are watching us. If we profess to be followers of Jesus, why do our actions say just the opposite? If someone was thinking of following Jesus, our actions could point them toward Jesus or away from Him. If our actions point to God, then we are glorifying Him.... and that is what He wants.

After Nathan returned home, David and Bathsheba's baby got very sick. David prayed, laid on the bare floor and went without food for seven days, asking God to heal him.... but the baby died. David's men were afraid to tell him about his son, but David could tell by the looks on their faces. David got up, washed his face and ate. His men were confused and asked him, " While your son was sick, you cried and refused to eat. But now that the baby has died, you stopped mourning and are eating again."
David answered, "I fasted and prayed while the baby was alive. I was hoping that God would be merciful and let the child live, but since he has died, why should I continue to fast? I can't bring him back to life. But one day, I will see him again in heaven."

It is so hard when someone dies. We feel sad because we won't be able to see them anymore. But we will.... in heaven. It's OK to be sad for a while, then God wants us to get back to what He put us on this earth to do. David knew his purpose.

Then David went home and comforted Bathsheba. Soon she became pregnant again and gave birth to another son. They named him Solomon. (the next king of Israel)
Posted by MrBibleHead at 12:40 PM No comments: