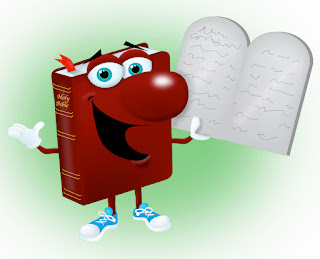 So why did God give us commandments anyway? Does He just want to spoil our fun? Doen't He want us to enjoy life? YES! He does! .... and that's exactly why he gave them (and us) the Ten Commandments. Imagine a game without any rules.... That wouldn't be too much fun with everyone doing whatever they wanted. Would it? How about if your mom or dad didn't have any rules for you? Let's say you were two years old and you wanted to cross a busy street. Your mom and dad didn't believe in giving you any rules and let you try to cross the street as they sat on the front porch and watched you try to get across the street without getting hit by a car. That would not be very loving of them. If we follow God's rules, we will have a fuller, safer and more enjoyable life!
God also gave us the Ten Commandments to help us see that we are sinners. If we don’t know the rules, how do we know that we are breaking them. The Bible says that Jesus was the only one who kept all the commandments His whole life.

Let’s look at the first four commandments . They are about God.

The First Commandment says: to Love God more than anything else. When you love someone, you let them have the first piece of pie. You let them get a drink from the water fountain first, even though you are thirsty. So if we love God more than anything else, we put what He wants first. What does He want? He wrote it down in the Bible and on two tablets of stone. He wants us to show our love for Him, by obeying Him.

The Third Commandment says: to honor God’s name. God is holy and so is His name. We should not blurt out His name when we get mad or hurt ourselves. How would you feel if every time something went wrong, someone yelled your name? When we say God’s name, He leans a little closer to hear what we are saying. We should use His name when we are praying, or telling someone about how much He loves us.

The Fourth Commandment says: to honor God by resting from work on the seventh day. Work is a distraction. God wants us to free up our time in order to Honor Him. When we go to church on that seventh day, God knows that we have put aside that time to spend with Him. He gave us the example of resting on the seventh day when He created the universe and rested after six days.

Now let’s look at the last six commandments. They are about loving each other.

The Fifth Commandment says: to honor your mom and dad. The best way to honor them is to obey them. God put them in charge of you. God is in charge of them. The only time God doesn’t want you to do what they say, is if they tell you to do something that is not right.

The Sixth commandment says: not to kill anyone, which also means not to hurt anyone. Jesus says that even thinking about hurting someone is just as bad as really doing it.

The Eighth Commandment says: not to steal. God sees everything. God loves us. God wants good things for us. When we take something that is not ours. It makes Him sad. Then God doesn’t give us the better thing that He had for us.

The Ninth Commandment says: not to lie. God hears everything. God loves us. God wants the best for us. When we lie, we are not trusting God. We think we need to lie to get out of some kind of trouble, but then the lies get us into more trouble. Jesus said that the truth sets us free.

The Tenth Commandment says: not to be jealous or greedy. This is hard because it deals more with our heart than the rest of the commandments. It is hard to be happy for someone when they have what we wanted, but that is what God wants us to do. Be happy for the kid who got the new bike.  When we do that. It changes us on the inside and we are happier with what we have.

Next time we will talk about the bad news and the good news of the Ten Commandments.