So Elijah had just witnessed God's amazing power in discrediting the prophets of Baal. He ran all the way to the Gates of Jezreel. He even beat king Ahab there... and he was in a chariot! The king went to his wife Jezabel and told her all about Elijah and how the prophets of Baal had all been killed. She became furious!
Meanwhile Elijah waited outside the gates of the city for word that the king and queen were now convinced that the true God of Israel was who He said He was. Elijah waited in excited anticipation. He knew that if the king and queen would turn from their false idols, that all of Israel would turn as well. Elijah looked up and he saw the king's messenger a long way off. He couldn't wait. He rushed toward the messenger to hear his message.
"Queen Jezabel has issued this statement." Elijah waited to hear the words that he had waited so long to hear. And the messenger continued. "May the gods also kill me if by this time tomorrow if I have failed to kill you, just like you killed my prophets! In the words of the queen"
Elijah was astonished. "What?" He knew he had to get out of there quick. He and his servant quickly left the gate of Jezreel. After a while Elijah told his servant that he wanted to be alone. So Elijah left his servant and continued on his journey the rest of the day on his own. The more Elijah walked, the more depressed he got. He kept going over in his head how he had failed. How things hadn't turned out like he planned. And how he was all alone. 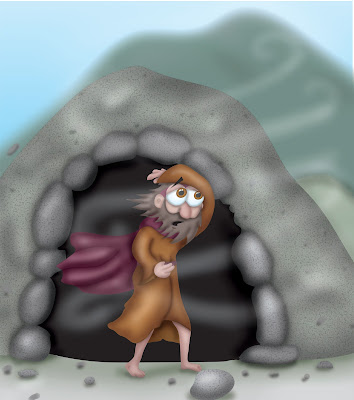 Sometimes we have such high expectations, that when things don't go how we planned, we get really down. Remember that no matter what, God is good and He is in control. It is OK to have expectations, but if we remember that God sees the bigger picture, and that His plan may not be ours, we can accept disappointment with the knowledge that God has this.

Elijah finally got so tired of running that he fell asleep under a tree. As he fell asleep he prayed that God would just take his life because he was such a failure. While he was sleeping and angel appeared. "Get up and eat Elijah." The angel nudged him. Elijah woke up and he saw some bread baked on hot stones and a jar of water! Elijah ate and fell back asleep. The angel nudged him again. "Eat some more, for you have a long journey ahead of you." Elijah ate and drank some more and then he walked for 40 days until he reached Mt. Sinai. (Remember Mt. Sinai was where God gave the ten commandments to Moses)
At Mt. Sinai, Elijah found a cave and rested there. He probably had negative thoughts in his head during the whole journey, because when he finally rested he prayed to God. "God, haven't I served you with all my heart? But still the people continue to turn their backs on you. They have killed all the prophets and now I am the only one left! They have also torn down your altars and replaced them with idols. I have had enough, God. I can't do this anymore!"
God told Elijah, "Go stand outside." As Elijah stood there, the Lord passed by. A mighty windstorm hit the mountain. It was so fierce that rocks were torn from the face of the mountain.  But the Lord was not in the wind. Then a strong earthquake shook the mountain. But the Lord was not in the earthquake. Then after that was a fire. But the Lord was not in the fire. After the fire came a gentle whisper and Elijah heard the voice of the Lord. 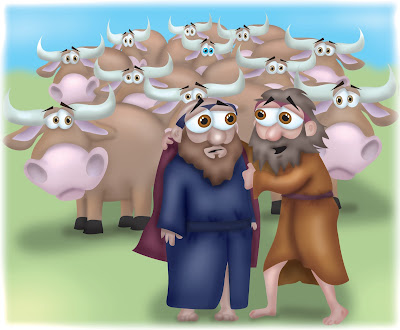 God was reminding Elijah that He was in control. Not only of nature, weather and fire, but also of circumstances. And that if we let ourselves be still long enough, we can hear from God. (Psalm 46:10) Then God reassured Elijah that he was not the only prophet left. There were 7,000 others. Then God told Elijah to go back to where he came from, anoint a new king of Israel and then anoint Elisha to take his place as prophet.
Elijah did as Lord commanded. He found Elisha plowing a field with his oxen. He threw his cloak over Elisha's shoulders and walked away. Elisha left his oxen standing there and chased after Elijah. He knew that God had called him. "I am just going to run back real quick and kiss my parents goodbye." Elisha said, "Go right ahead." Elijah answered.

Posted by MrBibleHead at 3:16 PM No comments: