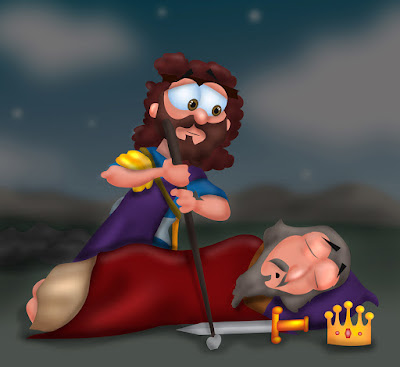 After  David married Abigail, he took Abigail and his men and headed back to their cave. That evening, on the way, they came across a camp. It was king Saul and his men.... and they were hot on David's trail! So either Saul changed his mind, because remember the king promised David that he would not try to kill David anymore, or King Saul lied. Either way he was after David again and David spared the king's life again. This time, while Saul was sleeping, David got close enough to jab a spear into the ground right next to him. Saul said he was sorry again, but David knew that the king wasn't ever going to stop trying to kill him. So David took his wife, his 600 men and their families and settled in a town named Ziklag. It actually belonged to the Philistines, but King Achish knew that Saul hated David and gave  the city to David and his men. When Saul heard that David was settled in Philistine territory, he stopped chasing him.

David and his army would go out and defeat any army that would endanger their new city. They even went to the king of the Philistines and volunteered to join forces with the Philistine army.  The king said OK, but the soldiers in the Philistine army did not want David with them. They were afraid that he would turn on them in battle, especially if they ended up in a battle against the Israelites.
So David and all 600 of his men headed back to Ziklag. From a distance, David and his men became concerned. They could see smoke rising on the horizon in the direction of Ziklag! When they arrived, they couldn't believe their eyes. The city was burned to the ground and all their wives and children were missing! While David and all his men were gone, the Amalekites had raided Ziklag, burned it to the ground, taken all their livestock and gold and carried off all the wives and children.
David's men began to weep till they could not weep any more. David was now in serious trouble because the men were bitter and blamed him. They began to talk of stoning David to death! But David found strength in the Lord. While his men were grumbling, blaming and complaining, David was praying. David asked God what to do. "Should I go and chase the Amalekites?" He asked God.
David heard from God. He rounded up all his men to go bring back their wives and their belongings. David knew they would be successful because of what God told him.

When you pray, do you give God a chance to speak by remaining quiet for a period of time, or do you do all the talking? Or are you like David's men.... complain, grumble and blame instead of praying? God wants us to speak to Him, but He also wants to speak to us. Sometimes listening to God is the hardest part. God speaks in many ways like through other Godly people, through His Word, through music and through experiences. If we contemplate God in these things, we can hear what He is saying. A very great way to do this is by using a resource called  " The Spiritual Circle Journal for Kids". Here is a link to their webpage.  http://www.spiritualcirclejournal.com/Kids-Journal.html 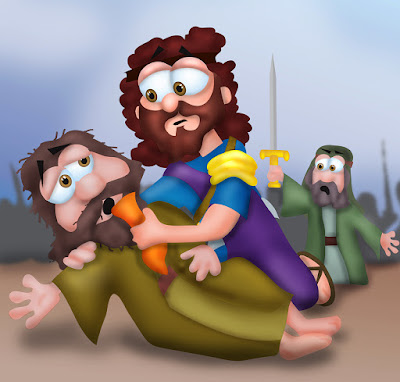 Some of David's troops found an Egyptian man in a field. They gave him some water and food. He hadn't eaten or drank anything for three days. When he was strong enough to talk, he told David that he was a slave of the Amalekites and they left him there to die. "Will you lead us to their camp?" David asked.
"Yes." Replied the man. But please promise me that you will not kill me or give me back to the Amalekites." David agreed.
So the Egyptian led them to the Amalekite encampment. While the Amalekites were celebrating, David and his army caught them by surprise and defeated the Amalekites. They rescued all the wives and children and they also retrieved all that had been taken from them and more. When they got back to Ziklag, David sent some of the plunder to his friends in Judah, and then they started to rebuild the city.

In the meantime, the Philistines attacked Israel. Forcing many of the Israelites to flee. Saul, his three sons and his army remained and fought. During the battle all three of Saul's sons were killed, including Jonathan, David's best friend. Saul was also severely wounded and ended up killing himself because he didn't want to be tortured to death by the Philistines.
The words for today are PRAY and LISTEN. God loves you and He wants you to make decisions that will be for your benefit and His glory. He won't steer you wrong. PRAY and LISTEN :)
Posted by MrBibleHead at 3:36 PM 2 comments:

After David had revealed to king Saul that he had spared his life and the king promised to leave David alone, they went their separate ways. King Saul went back to Israel and David went back into the wilderness with his army of men. David still did not trust the king and thought it best to stay away from him. 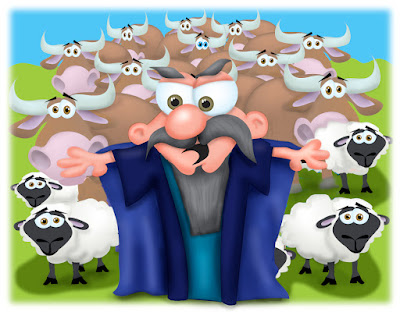 They set up camp near a rich man named Nabal always let his sheep and cattle out to pasture. David and his men would protect the flocks and herds against the Ishmealites who roamed the wilderness stealing and killing.
David and his men never asked for anything in return. When sheep shearing time came around, Nabal's entire household, including the people who worked for him, would join in a big sheep shearing festival. David sent 10 of his men to Nabal to ask if they could reap some of the benefits from the party.
Nabal (Whose name means fool) lived up to his name when he answered them. " Who does this David fellow think he is anyway? Go back and tell him NO WAY!"
David's men returned with the message from Nabal. David was furious! "He wouldn't even have the cattle and the sheep if we didn't help protect them!" David shouted. "Men strap on your swords! We are going to teach that fool a lesson!" David was so mad that he wanted to kill Nabal and all his men.
Meanwhile one of Nabal's men went to Abigail, Nabal's wife and told her of the situation.  Abigail didn't waste any time. She loaded up several donkeys with Nabal's best goods and headed in David's direction. I'm sure she was afraid, but she had to do something to protect her husband.

Have you ever found yourself in a sudden fearful situation. The Bible says over and over not to be afraid. Fear only clouds our judgement and sometimes it paralyzes us. The Bible tells us to be courageous. Courage is not the absence of fear. It is acting in spite of fear. Fear may paralyze, but courage acts. 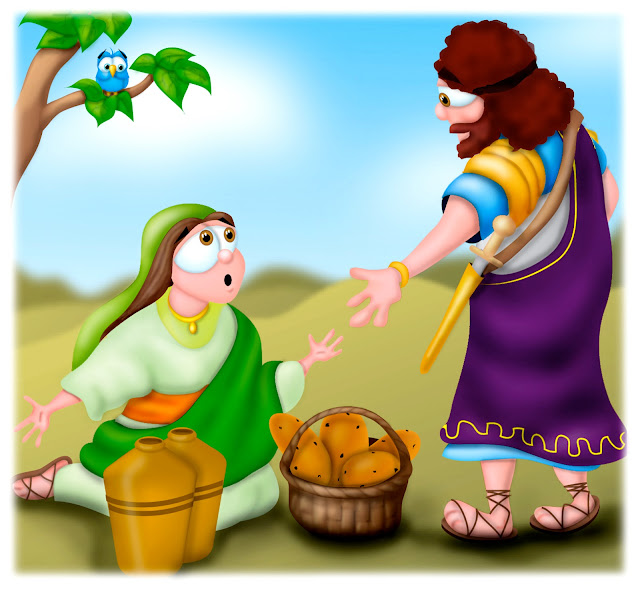 Abigail met David about half way. She fell at his feet. "My Lord, please have mercy on my foolish husband! Don't kill him and have that dark spot on your record when you become king." Abigail knew that David had been anointed the next king. Nabal must have forgotten or he didn't care. Abigail continued, "Here is plenty of food for you and your men. Please take this gift in good faith and spare my husbands life. I take full responsibility. May the Lord reward you with a lasting kingdom and victory in all your battles if you forgive me and my husband."
David looked at Abigail and responded. "Praise the Lord. He has sent you here to keep me from making a terrible mistake. Bless you for having the courage to come out here and meet us." Then David accepted the gifts. "Return home in peace. We will not kill your husband."

Whew! That was a close one! Nabal had no idea how close he came to ending up dead. Abigail was not only courageous. She was smart and humble. Did you notice that she asked for her forgiveness as well as Nabals, even though she had done nothing wrong. But wait! The story is not over.....

Abigail returned home after meeting David and his men. Nabal was getting out of hand at his sheep shearing party. He was so drunk that Abigail decided to wait till the next day when he was sober to tell him how close he came to being killed. The next morning, Abigail told Nabal everything. As a result, Nabal had a heart attack. He was in bed for ten days, then he died. When David heard what happened he said. "God has paid back Nabal for us!" Then he went back to Abigail and took her as his wife.

Romans 12:19 says not to take revenge. Leave it in God's hands. Sometimes He does it right away like in David and Abigail's story. Or sometimes He takes his time. Either way. it is out of our hands and in God's. He is the great just judge. (Isaiah 33:22)
Posted by MrBibleHead at 8:04 AM 3 comments: