As we get into the book of 1Kings, we find that David is getting old. He is sickly and cannot even stand, so he rules over Israel from his bed. Everyone knew that David did not have much longer to live, including his son, Adonijah. Adonijah was next in line for the throne according to birth order, but Israel was not like other nations. God appointed the next king, not birth order. But Adonijah didn't see it that way. He got 50 men together and some horses and chariots to escort him around. He figured if he looked like a king and acted like a king.... the throne would be his for the taking. He recruited a few of David's top officials including Joab, his top military leader and Abiathar, the leading priest. They agreed to support Adonijah in his bid to become king even though David had promised the throne to Solomon. Joab and Abiathar thought about what was best for them and not about God's will.

We do that all the time, don't we? I know that is is God's will for me to forgive, but I want to hang on to that feeling I have toward someone that has hurt me. But God's will is ultimately for our own good, and He knows that forgiving is the key to setting our mind and our hearts free. 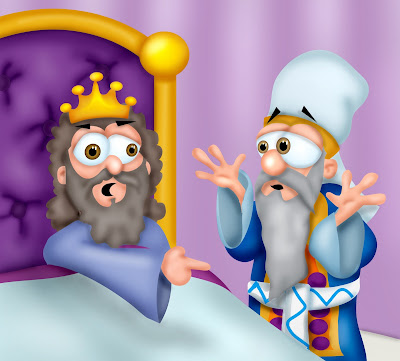 Well Nathan the prophet, (Remember him? He confronted David about his sin with Bathsheba.) heard about Adonijah's plan to become king and told Solomon's mother, Bathsheba about it. He told her that she must tell David right away because Adonijah had already made sacrifices and was throwing a huge banquet to honor himself as king. Nathan told Bathsheba to go to David's bedside and tell him about Adonijah, then he said that he would come in and confirm the story so that David would have no doubt that it was true.
So Bathsheba went in and asked David. "I beg your pardon my lord, but didn't you promise me that my son Solomon would succeed you as king?  (1Chronicles 22:5-9) It appears that Adonijah has not even waited for your blessing. He has declared himself king, and is having a great feast right now as we speak."
Then Nathan came in and asked the king, "Have you appointed Adonijah as the next king without consulting any of your trusted advisors? He has already exalted himself as the next king!"

From his bed David declared to Bathsheba, "As surely as the Lord lives, your son Solomon will sit on the throne!" Then He said to Nathan, Zadok the priest and Benaiah, "Quick, gather up my officials. Take Solomon down to Gihon Spring. Let him ride my royal mule for the journey. When you get there, anoint him with oil, blow the trumpet and shout 'Long live King Solomon!' Then when you return with him, Solomon will sit on the throne." 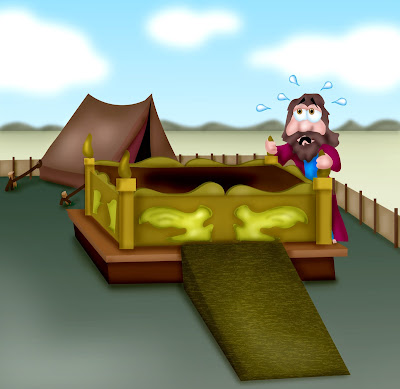 The 3 men did as David had asked. They anointed Solomon, blew the trumpets and shouted "Long live king Solomon." Then there was a great parade back to the castle. The people were all shouting, playing flutes and making a joyful ruckus.
When Adonijah and Joab heard all the noise, they were confused. Just then the son of Abiathar, the priest who supported Adonijah, came running up to them in the middle of their feast..
"I hope you have good news for us so we can continue celebrating." Joab said.
"No, in fact it is troubling news for Adonijah and all who have supported him. King David has just made Solomon king. The loud roars that you heard were all the people cheering as they paraded back to the palace where Solomon is now sitting on the throne!"
When all who were celebrating with Adonijah heard the news, they were afraid for their lives. They all got out of there as fast as they could, because the new king could have anyone executed. Adonijah feared for his life especially. He ran to the sacred tent and grabbed ahold the horns of the altar. (This was a holy place and Adonijah hoped that king Solomon would respect that and not have him killed). Word soon reached Solomon that Adonijah was pleading for his life in the sacred tent. Solomon sent one of his men to the tent to assure Adonijah that as long as he was loyal to the king, he would not be harmed. Adonijah went to the temple, threw himself at the feet of king Solomon and thanked him for his mercy.
Posted by MrBibleHead at 10:03 PM No comments: