Well we just finished another book of the Bible. So now 2 Kings begins with the the death of King Ahaziah who succeeded king Ahab.. Then the next chapter continues with the two prophets Elijah and Elisha walking and talking on the road from Gilgal. 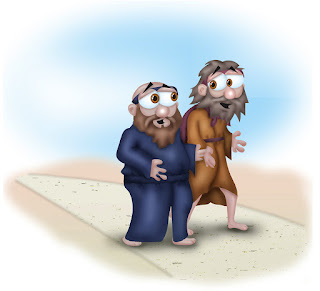 "The Lord has told me to go to Bethel. It's a long and arduous Journey. So if you don't want to come, you can stay here."  Elisha knew that the Lord was going to take Elijah home to heaven any day, and he didn't want to miss learning something or witnessing great things that he had heard that Elijah had been doing or he didn't want to miss an opportunity to be a part of something amazing that God was doing through Elijah. So he answered, "No, Wherever you go, I will go."
After a while in Bethel, Elijah said. "The Lord has told me to go to Jericho. You should stay here while I go ahead." Elisha again replied. "No, wherever you go, I will go." So they went on to Jericho.    One more time Elijah speaks up."Now the Lord has directed me to the Jordan River. Elisha quickly responded. "I am sticking with you no matter what, Elijah." When they came to the Jordan River, Elijah rolled up his cloak and struck the water. The river divided and the two men walked across on dry ground! When they got to the other side Elijah asked. " What can I do for you before the Lord takes me away?"
"I not only want to be your successor, but I want God to do twice as many things through me!"
"You have asked a very difficult thing Elisha," Elijah answered."But if you are with me when the Lord  takes me home, then you shall have what you asked for." 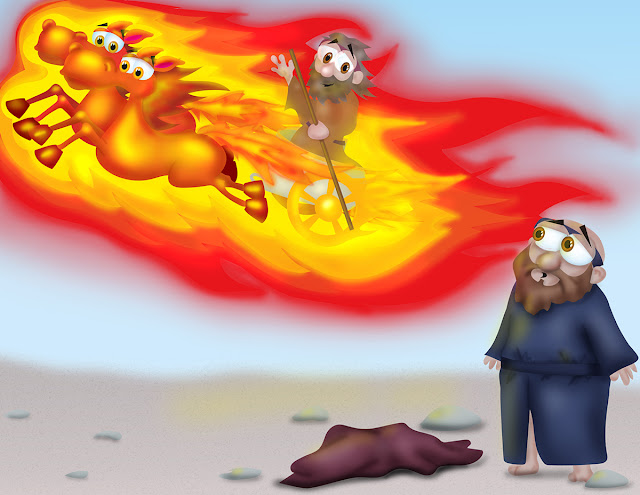 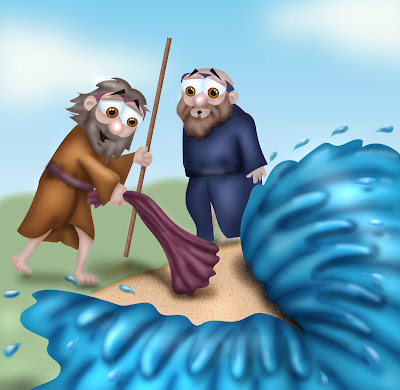 They began walking again and suddenly a chariot of fire swooped down. It was being drawn by two horses of fire. It passed between Elijah and Elisha and Elijah was carried away and taken to heaven, Elisha was awestruck at such a sight! He stood there for a bit, then he noticed Elijah's cloak lying on the ground. He picked it up and headed back toward the Jordan River. When he reached the Jordan, he rolled up the cloak, cried out to God and struck the water. The river divided just as it had done for Elijah. It was Elisha's first miracle. It wouldn't be long before he performed his second. Fifty prophets of the Lord saw Elisha crossing between the parted waters and exclaimed. "Surely Elisha is Elijah's successor!"
When Elisha got to Jericho, the leaders of the town approached him with a serious problem. "Our water supply is tainted!" They told him. "people are getting sick and we don't know what to do because the spring that feeds our water supply is contaminated!" 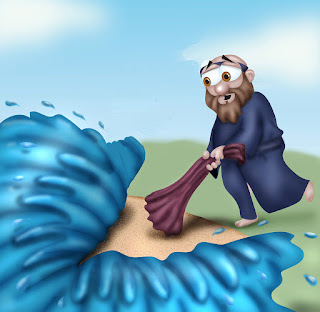 Elisha said. "Bring me some salt in a new bowl" So they brought it to him. Elisha took the salt and went to the contaminated spring and threw the salt into it."This is what the Lord says." Elisha shouted so all could hear. "I have made this water clean again. So there won't be anymore sickness, disease or death." And sure enough, the spring was pure.  This was his second miracle. Then Elisha left Jericho.

Did you notice how close Elisha followed Elijah? He wanted to be a witness to God's work, He wanted to learn about God's work and he wanted to be a part of God's work. We should follow Jesus that close! God has an amazing plan. What a blessing to be a part of it! And to be a witness to it! Following Jesus can be hard sometimes, but it is always exciting. How do we follow Him? By reading His word. (The Bible says that Jesus IS THE WORD) The better we know the word, the better we know Him and what He wants from us. Read your Bible, pray and hang out with others who do the same.
Posted by MrBibleHead at 10:19 AM No comments:

For the next three years their were several wars between Aram and Israel. King Ahab and the Israelite army were victorious, however The Armameans continued to occupy some of the Israelite territory. Meanwhile, King Ahab took notice of a vineyard that was right next to his palace. The king thought how nice it would be to turn in into a vegetable garden. The king approached Naboth, the owner of the vineyard, one day and asked him if he could buy the vineyard. Naboth replied, "The Lord forbid that I should ever sell this property to anyone. My ancestors have passed it down 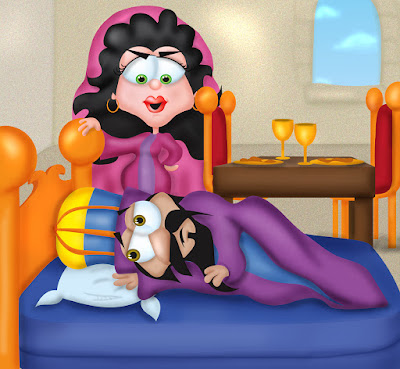 thorough generations." So Ahab left in a huff. He was angry and sullen. When He got home, he didn't eat dinner and laid on his bed with face to the wall. Jezebel asked Ahab why he was acting like a spoiled kid. "I asked Naboth to sell me his vineyard next door, and he refused." Ahab pouted.
"Aren't you the king?" asked Jezebel. "Get up and eat! Don't worry about a thing. I will get that vineyard for you!"

So Jezebel wrote letters in Ahab's name, sealed them with his seal, and sent them to all the big shots in the city. In the letters, she commanded them to call all the people together to honor Naboth. Give Naboth a special seat up front, then hire some sleazy characters to tell a bunch of lies about him. She knew that the people would be so upset, that they would take him out of town and stone him to death....... and that is just what happened. Then the big shots sent a message to Jezabel telling her that Naboth was dead.
When Jezabel heard the news, she said to Ahab. "You know that vineyard that you were whining about? You can go take it now. Naboth is dead!"

God told the prophet Elijah what Ahab and Jezebel had been up to, and by the time Ahab went out to the vineyard to take possession of it, Elijah was already there with a message for Ahab from God. "Isn't killing Naboth bad enough? Must you rob him too?" Elijah continued. "The Lord says this is the last straw! Now your entire family will be destroyed." 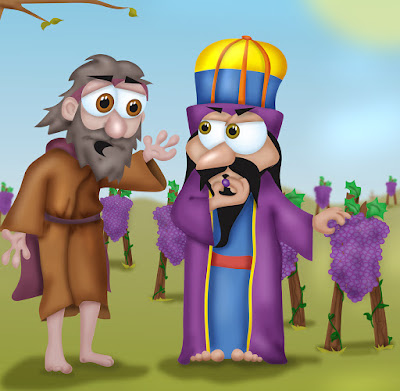 No one sold himself so completely to evil in the Lord's sight as Ahab, for his wife, Jezebel, influenced him. Ahab was guilty of evil even though his wife was behind all the wickedness. God wants to be the influencer in our lives. If we let others lead us astray.... that is on us. We are guilty. Don't point fingers at anyone else. We are responsible for our own actions.

For three years there was peace in Israel. Ahab was still looking over his shoulder wondering if God was going to destroy him. But none the less, he approached king Jehosaphat of Judah and pitched him the idea of attacking Aram. "Sure my brother!" Jehosaphat replied, "But let us ask the Lord first." 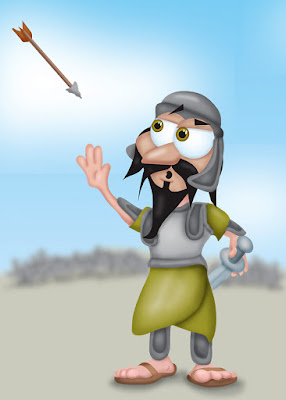 Well Ahab, instead of inquiring of the Lord, summoned 400 of his prophets and asked them if attacking Aram was a good idea. "Go right ahead! You will celebrate a glorious victory!" they said. But Jehosaphat wanted a prophet of the Lord to chime in, so he brought Micaiah into the conversation.  The prophet Micaiah told the two kings that the 400 prophets were just telling the kings what they wanted to hear, and that they were completely wrong about a glorious victory. Ahab was so mad. He told the guards, "Lock this man up until I return from battle in victory."

Ahab thought he could outsmart God. He knew that the Arameans only wanted to kill him (the king of Israel) so he told Jehosaphat to wear his royal robe into battle. Ahab thought that the Arameans would kill Jehosaphat, thinking that they had killed him. When the battle began, the Arameans spotted the king wearing the royal robe and moved in on him to get a clear shot. But the closer they got, the clearer it became that it was not Ahab.... so the captain prevented his men from shooting arrows at Jehosaphat. But one soldier shot an arrow randomly into the air. It carried into the center of a group of Israelite soldiers, found a gap in Ahab's armor and killed him. God sees all, knows all and is control of all things. We can't run from Him. We can't hide from Him. And we can't fool Him.
Posted by MrBibleHead at 11:17 AM No comments: