So David stood before king Saul. The king asked him. "What's with all the questions about the reward for killing the Philistine soldier known as Goliath?"
David replied. "Don't worry about a thing. I will go and defeat the giant."
"Don't be ridiculous!" The king replied. "You are just a boy! He has been in the army since before you were even born!"
David persisted. ""God has been with me when bears and lions attacked my father's sheep. I clubbed the beasts and sometimes would even have to kill them with my bare hands." 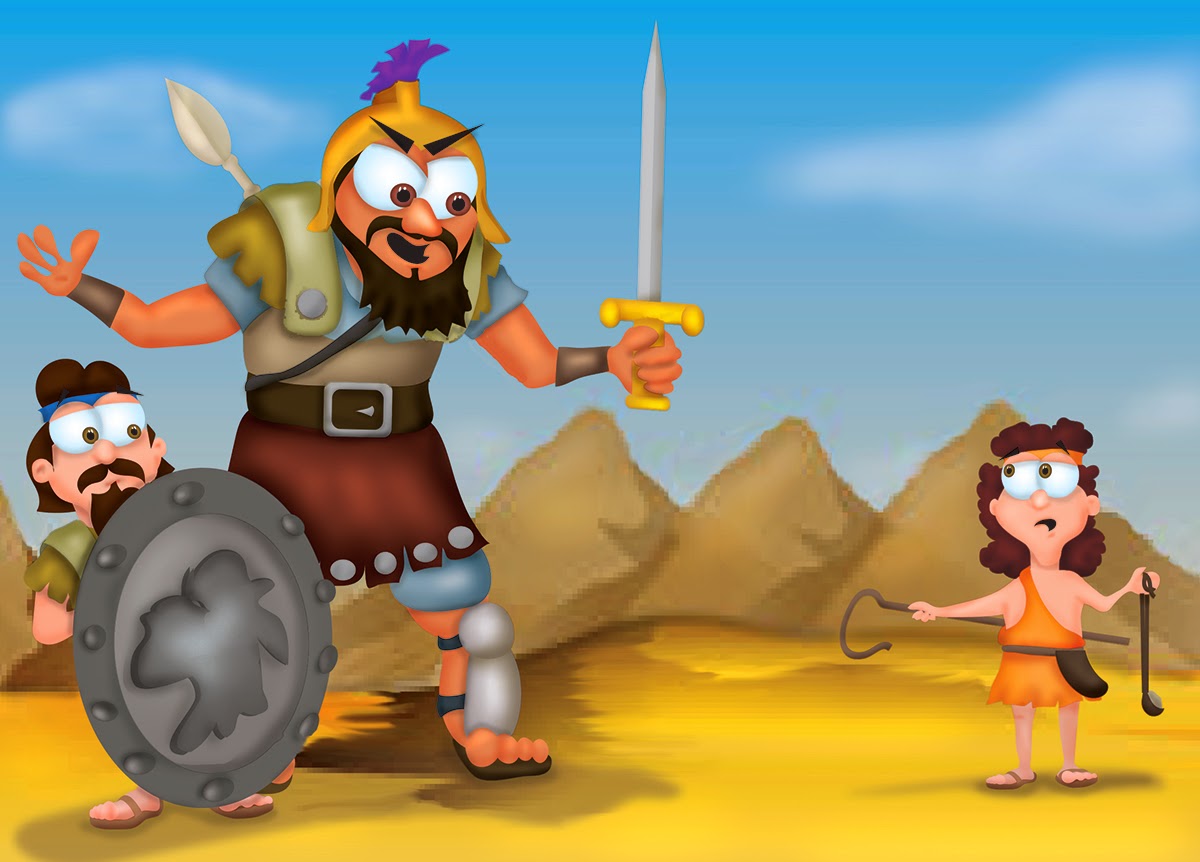 David remembered how God helped him through the tough times. When we are faced with difficult situations, it helps to remember the times when God was there for us in the past. David also realized that the lions and bears were training him for something bigger. Are you going through a tough time? It may be that God is preparing you for something great.

Finally Saul agreed to let David go and fight Goliath. He even gave David his own personal armor to wear. But Saul was very tall and the armor felt clunky and uncomfortable to David. So he took it off. He wasn't used to wearing any type of armor when he was defending his father's sheep. David grabbed his staff and a slingshot. Then he headed down to the river where he picked up five smooth stones and put them into his pouch.
Goliath was already out in the clearing taunting the Israelite army. David came up from the bank of the river and ran toward Goliath and his armor bearer.

To everyone it looked like two against one.... and a very lopsided two against one at that, because one was a giant with a spear, armor and a shield bearer and the other was a boy.  It WAS lopsided, but not a giant against a boy, but God and a boy against two men. 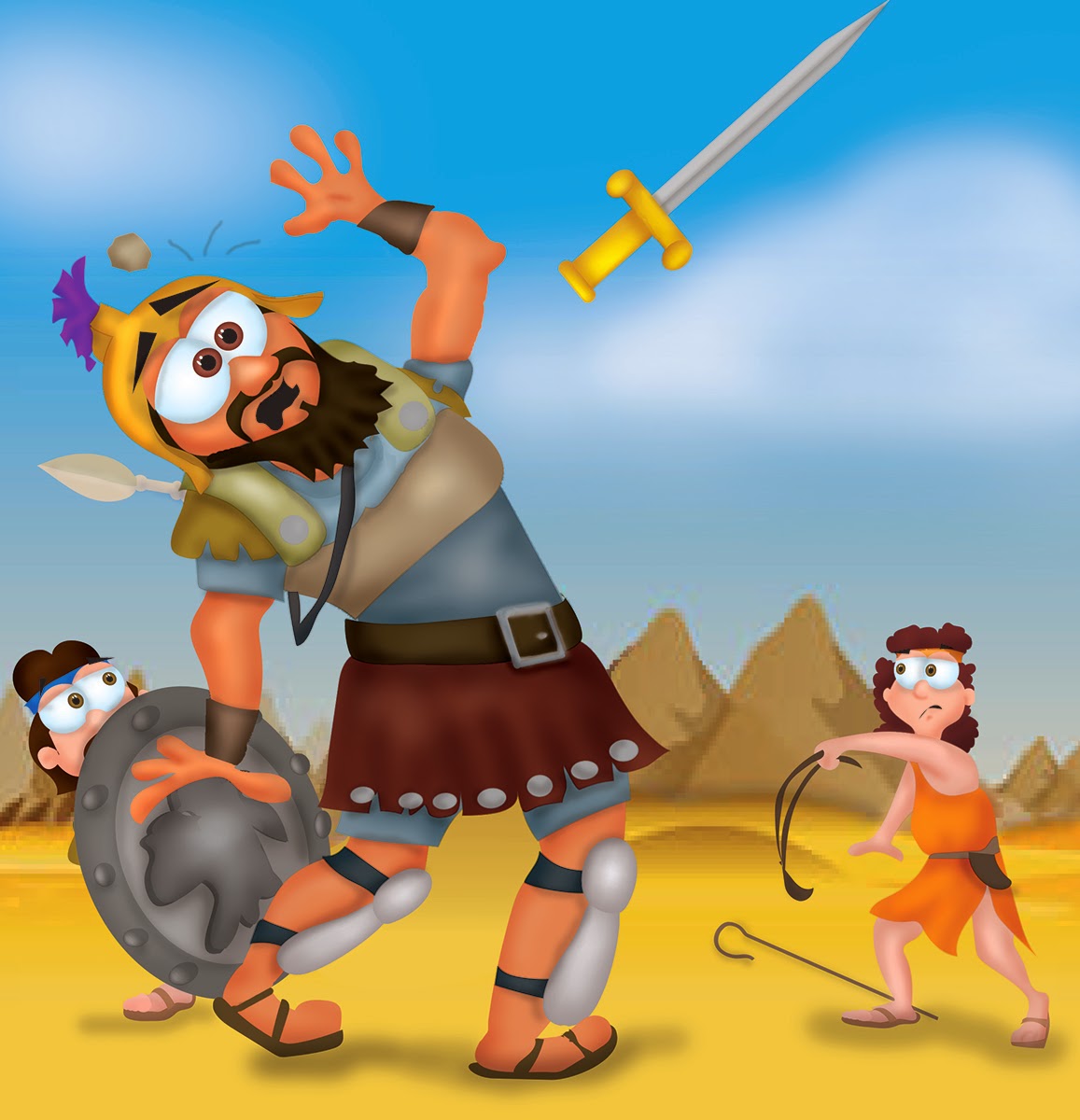 Goliath sneered at David. "Am I a dog that you come at me with a stick? Come over here and I'll feed you to the wild animals!" He shouted.
David shouted back. "You come to me with a spear, javelin and a sword. But I come to you in the name of the Lord God Almighty. Today He will conquer you, then I will feed you to the wild animals and the whole world will know that there is one true God! This battle is not mine, but it is the Lord's because you have defiled His people." David continued running toward Goliath as he reached into his pouch and took out a stone. 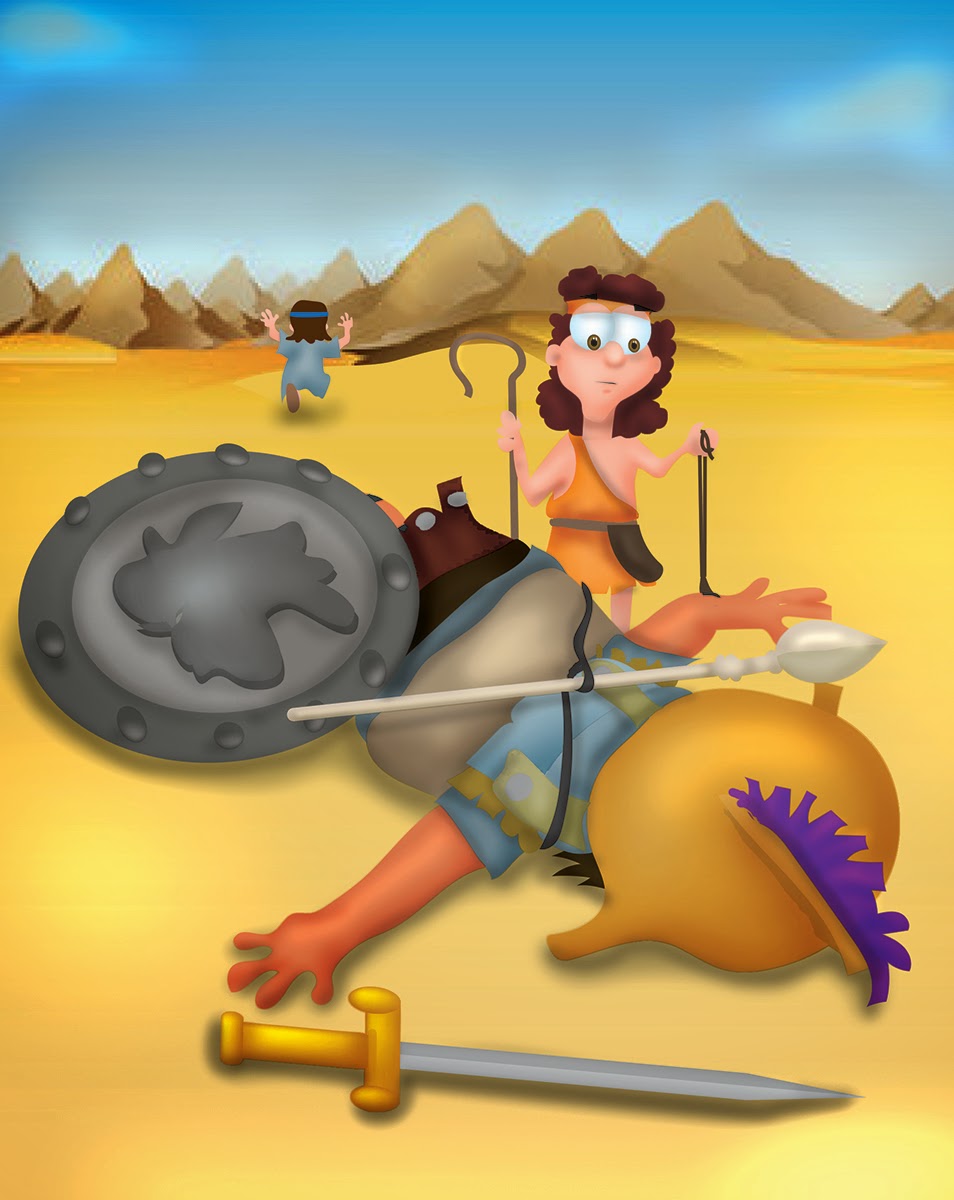 When facing problems in our lives, do we look at the problem and give up or panic? Or do we have the confidence that comes with knowing that God is on our side. If God is for us, who can be against us? (Romans 8:31)

As David ran toward Goliath, Goliath moved toward David. Placing the stone in the slingshot, David hurled it toward Goliath. It hit Goliath in his head. Goliath fell with a great thump face down to the ground. He was dead. David triumphed over the Philistine giant with only a stone and a sling.
The Philistine army saw Goliath fall to the ground and ran away. The Israelite army, now full of confidence, shouted triumphantly and chased the Philistines out past the gates of Ekron.

God doesn't want us to sit back and wait for Him to fight our battles. He also does not want us to do it all by ourselves. He wants us to team up with Him.  He loves you and everything He allows into your life is for His greater purpose. Trust Him in the little things, the big things and the difficult things.

Posted by MrBibleHead at 12:46 PM No comments: