I apologize that my last couple of posts have disappeared. I am working on trying to get them restored. If anything, I will repost the illustrations.

So David settled in as king of Israel. The Philistines began to battle with the Israelites, but David quickly subdued and humbled them. Other nearby countries were also subdued by David and the Israelite army. Soon Israel grew in riches and David became famous in all the land.
One evening while David was enjoying a time of calmness in his kingdom, he began to think about his friend Jonathan who died in battle years earlier. He missed his friend. He remembered the laughter, the fun, the serious talks, the promises..... THE PROMISES! David remembered that he promised his friend that if anyone in Jonathan's family was alive after he became king, that he would take care of them. So David called in his servant Ziba, who had also been one of king Saul's servants.
"Do you know if there are any surviving members of Saul's family?" David asked.
Ziba looked a bit concerned because he knew that the kings in other lands would kill the entire family of the previous king to prevent any chance of an uprising to recapture the crown. 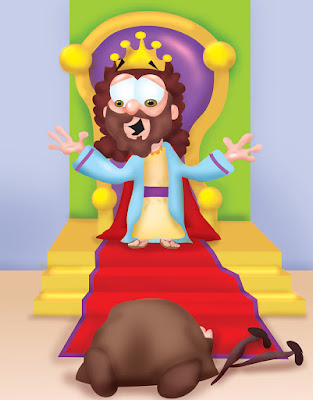 David reassured him. "I just want to show anyone that may be left, the kindness of God."
Ziba answered. " Yes there is one. He is Saul's grandson and Jonathan's son. He is living just outside the kingdom in a in the home of Makir. But he is crippled."
"How did he happen to become crippled?" asked David.
"His name is Miphibosheth and he was 5 years old when Saul and Jonathan were killed in at the battle of Jezreel." Ziba continued. "When news of the battle reached the capital, the child's nurse grabbed him and fled. But she fell and dropped him as she was running. He became crippled as a result."
"Go get him and bring him back here." David said.
So Ziba went to Makir's home and found Mephibsheth. "The king requests your presence."
Mephibosheth was nervous. "What would the king want with me? I am crippled and can't do anything for him."
"Don't worry. The king is for you. He is not against you." Ziba replied. "He simply wants to show the kindness of the Lord to you."

This is just how God calls us. He knows that we are like Mephibosheth. We can't do anything or give anything to God that He doesn't already have. He just desires to show us His love, mercy and kindness. Have you responded to God's love by trusting in His son Jesus? That's what He wants. For us to accept His offer of forgiveness and to trust Him with our lives. If you want more information about this, call this phone number. 1-800-NEED HIM 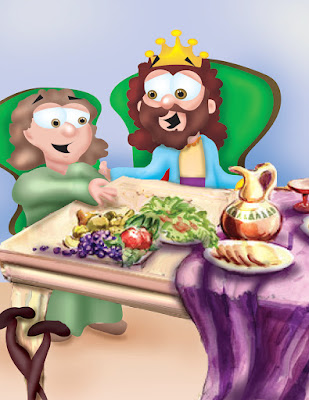 And that's what Mephibosheth did. He went with Ziba to David and bowed before him and said, "I am your servant."
"Don't be afraid." David said. "I have asked you to come because of a promise I made to your father. I want to show you kindness and give you all the land that once belonged to your grandfather, Saul." David continued. "And you may live with me in the palace."
Then David summoned his servant Ziba, "I have given Mephibosheth all the land that belonged to his grandfather. Since you were Saul's servants, I think it only right that you and your entire family are now Mephibosheth's servants. So Mephibosheth moved into the palace. He ate dinner with David just like one of his sons, and Ziba and his family (He had 15 sons) were there to serve him.

Jesus said that He is preparing a place for us in heaven.  (John 14:3)

Posted by MrBibleHead at 2:01 PM No comments: