When we left off last time, Moses was just 3 months old. By the king’s order, his mother was supposed to throw him into the Nile river when he was born, but she hid him for three months. Finally, she could hide him no more and decided to make a floating basket for him. She wrapped him in a blanket and placed him in the river. That must have been so hard for her. I’m sure she was crying. Miriam was Moses’ sister. She must have been sad when her little brother was floating away down the river.


Do you have a little brother or sister? I know that you can understand how sad and afraid for Moses she was. She began running along the river, watching the basket that carried Moses. It got caught in some weeds. Miriam stayed and watched. Then she saw someone coming down to the river. It was the king’s daughter and her servants. The king’s daughter waded into the water. The servant girls waited on shore with towels to dry herr when she was done swimming.
"What is that in the weeds?” The king’s daughter asked. “Go get it and bring it to me.” She commanded one of her servants. 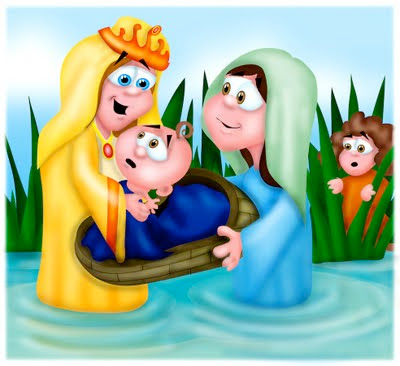 The servant girl reached into the water and pulled out the basket. The baby was covered and quiet. When she brought the basket to the king’s daughter, she pulled back the blanket. 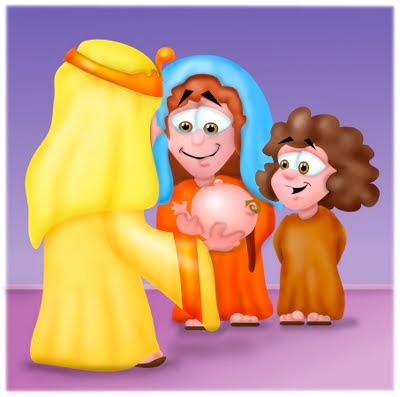 Miraim ran as fast as she could to get her mother. When she finally reached her mother, Miriam told her all about how the King’s daughter wanted to raise the baby, and that she needed someone to care for the baby. She grabbed Moses’ mother’s hand and they both ran back to the king’s daughter.


“Please care for this baby.” The king’s daughter said to Moses’ mother. "I will pay you for your time as well.” She added. Miriam and her mother took the baby and thanked God as they turned to go home.
"Oh one more thing,” the king’s daughter added. “His name is Moses because I pulled him out of the water.”
In Egyptian, moses means to pull out.
So Moses’ mother not only got her baby back, but the king’s daughter paid her to take care of him! God is so amazing!
We can read the story of Moses and think to ourselves, “Wow! He was so lucky! But God had a plan for Moses. Everything that happened was part of God’s plan. We will see more of God’s plan unfold as we follow the life of Moses.
Did you ever think to yourself. “ That was a lucky break", or, “ what a coincidence.” God is in control of all things. There isn’t any luck or coincidence involved. God is working his plan in your life, just as he did in Moses’ life. Isn’t it exciting just wondering what God has in store for us!
Posted by MrBibleHead at 7:52 AM 1 comment: