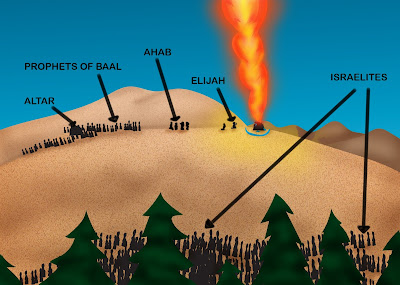 After the prophets of Baal spent all morning trying to get their god to answer them, Elijah called the people of Israel over to the altar of God. (Which he was repairing as he spoke) Elijah took 12 stones, one to represent each of the tribes of Israel to repair the altar. Then he dug a trench around the altar. He had the bull laid on the wood on the altar and requested that 4 buckets of water be poured over the bull, the wood and the altar. So they did as Elijah requested. Then he told them to do it a second time and they did. Finally he asked for a third drenching and they did it again. By this time, the trenches that were dug around the altar were overflowing.
It was evening by now and Elijah went to the altar and prayed. "Oh Lord, God of Abraham, Isaac and Jacob, prove today that you are God in Israel. I am your servant and I have done all that you commanded. Oh Lord answer me so that these people will know that you are the one true God."
Immediately the fire of the Lord flashed down from heaven and burned up the bull, the wood, the stones and the dust. It even licked up all the water in the trench! The people were in awe. They began to cry out "The Lord is God! The Lord is God!" Then the prophets of Baal were all put to death.

In Elijah's prayer we can see that this whole thing was God's plan. He had commanded Elijah to soak everything so that there would be no question that it was Him behind the fire and not some trick.  We
should never put God in a box. In other words, God can do more than we can even imagine. Ephesians 3:20 says it so well..... Now all glory to God, who is able, through his mighty power at work within us, to accomplish so much more than we might ask or think. 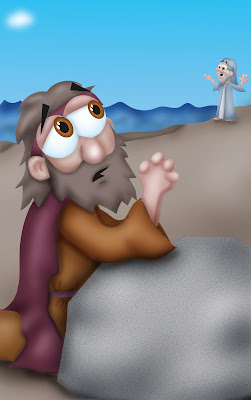 Elijah turned to Ahab. "t hasn't rained for 3 years, but I hear a mighty rainstorm coming!. Go home and enjoy a nice meal before it hits." Ahab headed home and Elijah took his servant and climbed to the highest point on Mt. Carmel. Elijah fell face down to ground and began to pray. Then he said to his servant. "Go and look out toward the sea."
The servant returned to Elijah and said. "I looked out to sea, butI didn't see anything."
"Go look again." Elijah replied, but again the servant saw nothing. The servant looked toward the sea six times, and then on the seventh time he saw something.
"Master, I see a cloud rising from the sea. But it is no larger than a man's hand." he reported.
"Hurry to Ahab!" Elijah shouted. "Climb into your chariot and go back home. If you don't hurry, the rain will stop you!" 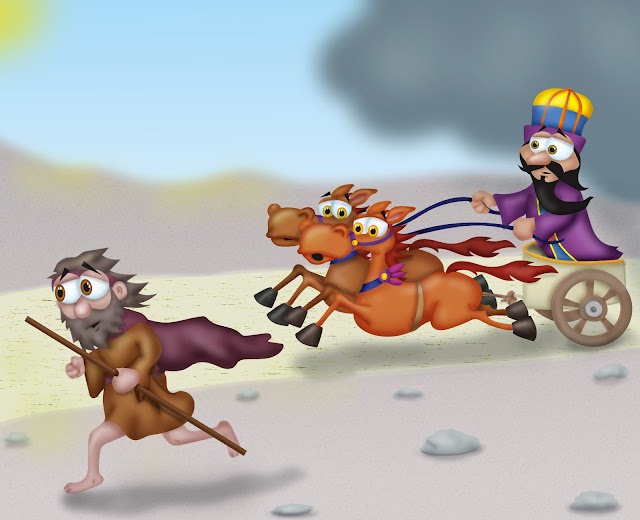 Elijah's servant caught up with Ahab and told him about the impending storm. Ahab quickly left for his home in Jezreel. The winds were kicking up and the skies were getting darker and darker. Ahab had his horses pulling his chariot as fast as they could go! "Faster, faster!" He shouted.
Now the Lord gave special strength to Elijah. He tucked his cloak into his belt and ran faster than the horses pulling Ahab's chariot! Elijah beat Ahab to the entrance gate in Jezreel!


Wow! Imagine being able to run that fast! God does some amazing things. Ahab just witnessed three of them in a matter of a couple hours. 1. God's fire from heaven 2. The end of a three year drought. 3. Elijah's turbo-speed sprint.

Next time we will see if witnessing these three miracles has an affect on Ahab's life and his attitude toward or God, or if his wife Jezebel has more influence on him.

Posted by MrBibleHead at 3:48 PM No comments: