Joseph, from slave to official to prisoner (Genesis 39 &40)

Hey guys! Joseph was such an interesting guy. Wasn’t he? Let’s do a quick recap of his life so far.
He was sold as a slave by his brothers who told their father that Joseph was dead. Joseph loved God and did was was right and became the best slave ever! Potipher, a big shot in Egypt, saw that God was with Joseph and made him head of his household and put him in charge of everything he owned. Potipher trusted Joseph.

Potipher’s wife liked Joseph (a little too much) and tried to kiss him on several occasions. Joseph tried to keep his distance from her. When we left off last time, Potipher’s wife tried to make a move on Joseph again, but Joseph ran out of the house so quickly, that he left her holding his cloak. Potipher’s wife was mad! She called her servants and said, “ That slave boy snuck in here and tried to force himself on me! When I screamed, he left in such a hurry that he left his cloak. See!” and she held up Joseph’s cloak.Word got back to Potipher about what Joseph had (supposedly) done.

”How could he do this to me? After I trusted him with all I own?” Potipher asked himself.  He had Joseph thrown into prison! 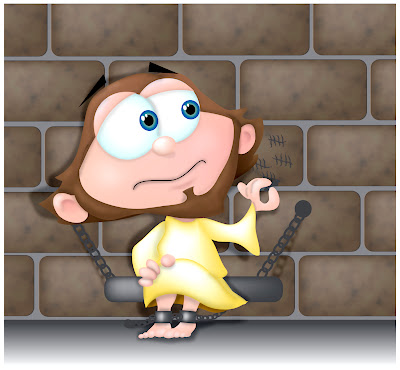 Joseph looked around his prison cell at the four gray walls that surrounded him.  Joseph did what was right by running from Potipher’s wife, but he still ended up in prison! That doesn’t seem fair, does it? It seems like God should have shown Potipher the truth. Then Joseph would have been rewarded and Potipher’s wife thrown in prison. But God’s thoughts and his plans are way higher than our own. (Isaiah 55:9) Joseph trusted that God knew what he was doing and he still loved God and became the best prisoner ever!

Because Joseph was a model prisoner, he became head of the prison. (God is planning something) A short time later, the king threw two of his royal officials into prison with Joseph. One was the king’s personal baker and the other was his cupbearer. The cupbearer would taste the king’s food before the king to make sure that it wasn’t poisoned. I don’t think I would like to have that job!

“You will be given your job back.” Joseph told the happy cupbearer.
The baker was excited to tell Joseph his dream after hearing the cupbearer’s good news. 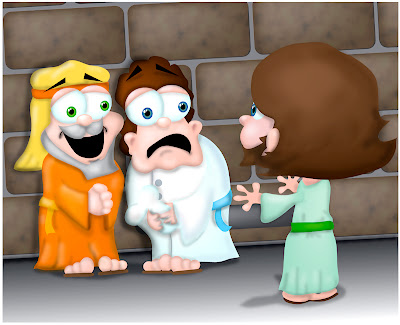 “I’m afraid I have some bad news for you.” Joseph said to the baker. The baker’s smile turned to a frown. “Your dream means that the king is going to execute you.” Yikes! That is bad news! The sad baker turned and walked away. Then Joseph said to the cupbearer, “When you get your job back and you are speaking with the king, put in a good word for me.”

“Oh I surely will! Right away! When the king hears how you were wrongly imprisoned, he will have you released . I’m sure!" Said the cupbearer. But three days later the cupbearer got his job back and forgot all about Joseph. Joseph was left in prison for years and years but he continued to love God and obey Him.

Sometimes being a Christian is not easy, but God has a plan and His plan is much bigger than us. As we go through Joseph’s life, we can see God’s plan working. It is a lot harder to see God’s plan in our own lives, especially when things are not going too well. Trust and obey God and leave the rest up to Him.
Posted by MrBibleHead at 10:15 AM 1 comment: