When we left Gideon, he was brought out into the streets where the people wanted to kill him because he destroyed the altar of Baal and the Asherah poles.
Gideon’s father spoke up.” Let’s let Baal punish him. After all it was Baal’s altar that was destroyed.”
The Israelites agreed to leave Gideon in the hands of Baal. So what do you think happened to Gideon? That’s right. NOTHING. Because Baal is a made up God that the Israelites began worshipping, nothing at all happened to Gideon.
In the meantime, the armies of Midian, Amalak and the armies from the east joined forces and began to move in toward the Israelites who were already living/hiding in caves because of recent attacks. The spirit of the Lord came upon Gideon and he blew a ram’s horn. This was a call to the Israelite men to take up arms against the invading armies. 32,000 men showed up! 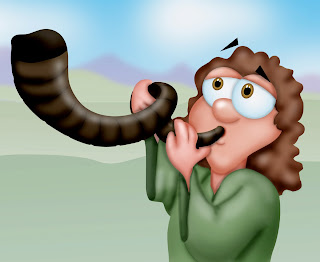 Gideon wanted to make sure that he heard God correctly so he prayed. “God if you are really going to use me to rescue the Israelites, please give me a sign. I will put some wool on the ground. If I wake up in the morning and the wool is dry and the ground is covered in dew, then I will know that you will help me rescue the Israelites as you promised.
God’s promises are rock solid. If God promised, He will do it! The Bible is full of God’s promises. (over 6,000 of them!) We don’t need to ask for a sign... God already gives us His word.
But God gave Gideon his sign. In the morning the wool was dry and the ground was wet.
“Please don’t get mad at me God.” Gideon said as he felt the dry wool. “But could you give me another sign? This time let the ground be dry and the wool wet. Then I will know that you will help me rescue the Israelites.” 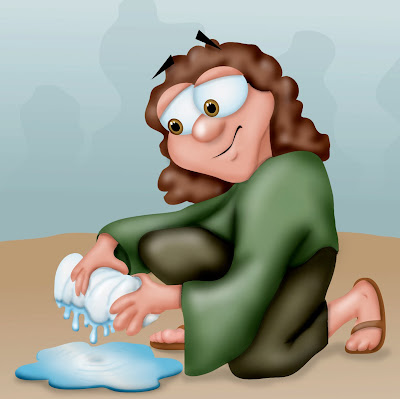 In the morning the wool was wet and the ground dry!  Gideon knew what God wanted him to do. The very next morning, Gideon and his army got up early and began to move toward the enemy armies. Then God spoke to Gideon. “Gideon, you have way to many men in your army. Call all your men together and ask them if any of them are afraid of the enemy armies. Send them home.”
So Gideon called all his men together. “If any man is fearful of the battle before us, he may return to his home.” Gideon proclaimed. 22,000 men went home that day! Wow! That only left Gideon with an army of about 10,000 men. (Which was very little compared to the hundreds of thousands of men in the enemy army).
I’m sure Gideon was a little nervous. What was God up to? Guess what? god spoke to Gideon again. “You still have too many men in your army. Go down to the river so that the men can get a drink of water. The men who drink straight from the river like a dog lapping up water will be the ones you will send home. The men who cup the water in their hands and bring it up to there mouths will be your army. 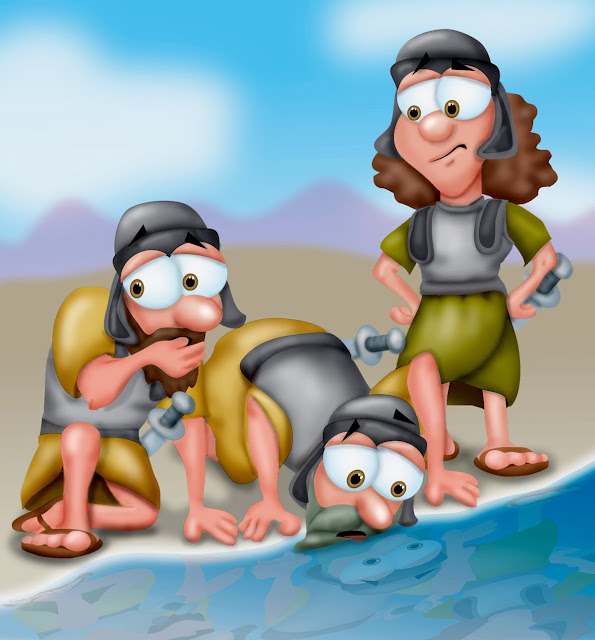 I’m sure when Gideon saw most of the men lapping up the water like dogs, he got even more nervous. 9,700 men were sent home. That left Gideon with an army of 300! Yikes! Why do you think that God wanted a smaller army? God wants us to know that He is the reason for victory. That is why He sometimes waits until the last minute, till all hope is lost before He pulls us through.
By now the enemy army had moved in closer and they were camped in the valley just below where Gideon and his army of 300 stationed. God spoke to Gideon again. “ Gideon, I’m sure you are a little nervous about the battle tomorrow. Tonight I want to let you know that I have everything under control. Take your servant Purah and sneak into the enemy camp. What you hear will surely encourage you and make you eager to fight this battle. So Gideon took Purah and started down into the valley. From where they were perched, they could see all the camels that the enemy had. The camels looked like sand on the seashore! Way too many to count!  With lumps in their throat Gideon and Purah descended into the valley and made their way to just outside one of the tents. Two men were speaking inside. Gideon and Purah listened closely as one of the men shared his dream with the other man.
Next time we will find out what the dream was. If it encouraged Gideon. And if Gideon and his army of 300 were able to defeat the vast armies that were moving in on them.
God wants us to love Him, trust Him and obey Him.  Because He loves us. He is in control. And He wants the best for us.
Posted by MrBibleHead at 12:50 PM 1 comment: