After God confused the language of the men building the Tower of Babel, the people moved to different lands. Hundreds of years later, God talked to a man named Abram. (God changed his name to Abraham .. we'll find out why later) 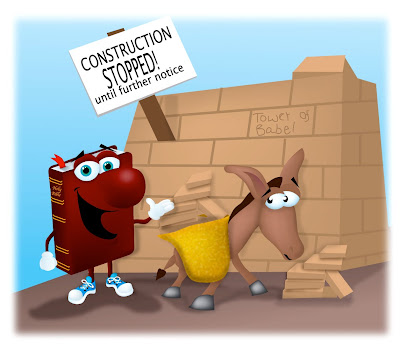 So God told Abraham to gather up his family and all his belongings and go. He didn't tell Abraham where he was going, He just said to head east. So right away, Abraham took his wife, his nephew Lot, his servants (Abraham was pretty rich) and all his stuff. Wow! Abraham really obeyed God! It was probably pretty hard leaving the place where his father had made a home for them. Abraham was 75 years old when he left his home. He followed God for hundreds of miles to a place called Canaan. When they arrived, God told Abraham, "See all this land, I will give it to you and your children and their children." But Abraham didn't have any children. But he didn't question God, instead he built an alter to thank God for all the blessing in his life.


Abraham couldn't stay in the land however. It hadn't rained for a while and it was hard to find food. So Abraham took his family and all his belongings to a place a couple of hundred miles away along the Nile river where there was plenty of food. When food became a little easier to find back in Canaan, Abraham took his family again and headed back toward the land that God has promised.

We are so blessed that we get to see the whole story in the Bible. We know that God ALWAYS knows what He's doing. He ALWAYS keeps His promises and He's ALWAYS good and he ALWAYS will be good.

Ok back to the story. Remember that Abraham took his nephew Lot along with him. Abraham took him along because Lot's father, Haran, had died and Abraham had taken care of Lot as he was growing up. Well Lot was a man now, and as Lot and Abraham headed back to the promised land, they realized that they had to go their separate ways. It was too hard to travel together since both men were very rich and had a many cattle and sheep. Abraham gave Lot a choice and Lot decided to go toward the best looking land, so Abraham headed in the other direction. 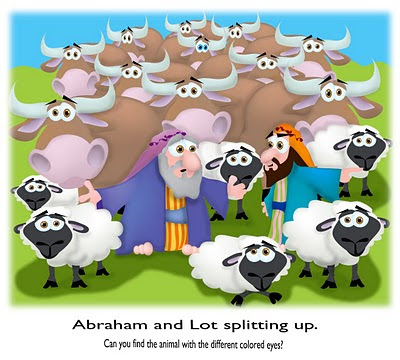 Sometimes the best looking things are not really the best. That's why we should pray about our choices. We see the outside but God sees the whole picture. He knows best. As it turned out, the land that Lot chose was full of a lot of evil men. Also there was a war going on there and Lot was taken prisoner. Abraham was living peacefully with his wife Sarah when he heard about what happened to Lot. Abraham got 318 of his men together and they rescued Lot and all the other people that were taken prisoner. Abraham gave God all the credit and the king praised God. We should always give God the credit. That's called glorifying God and then other people may realize what great things that God does and give Him the credit too.

So Abraham went back home. He was living just outside of the land that God promised. There were people living in the land at the time. Finally Abraham asked God. "Remember when you said that this land would be my children's and their children's? Were you saying that I am going to have children? Or did you mean my servant's children?"
God answered Abraham by taking him outside. "Look up at the stars Abraham." God said. " If you could count every star, it still would not be as many as your own descendants." Abraham believed God and because he believed, Abraham was now in God's family.

We can learn a lot about trusting God, following God and believing God from Abraham. The Bible is God's word. First we have to trust what He says in His word. Second we have to do what He says in His word. That's what following is all about. Finally God want's us to believe that he sent His son Jesus to die for our sins so that we can spend eternity in heaven with Him. When we believe Him, we become part of God's family... just like Abraham.

Next time we will find out how long Abraham had to wait for a son and why God changed his name from Abram to Abraham.
Posted by MrBibleHead at 12:10 PM 3 comments: