Naaman is Healed and Gehazi get greedy (2 Kings :5)

The Armenean army was constantly attacking parts of Israel and taking captives. During one such battle, a young girl was taken and given to Naaman, the commander of the Aramean army, as a maid for his wife. The king of Aram thought very highly of Naaman and he was showing his appreciation  to him for being such a loyal subject.
There was one problem however. Naaman had leprosy. Leprosy is a skin eating disease that eventually leads to death. The young Israelite girl watched Naaman as she did her maidly duties. She knew that God may have allowed her to be taken captive for this very moment. She approached Naaman's wife. "Our God is amazing." She began. "He can certainly heal your husband of his disease." Naaman's wife listened intently. "There is a prophet in Israel named Elisha." She continued. "I'm sure if you find him and ask him, God will work through him and heal your husband." The girl's words gave Naaman some hope. He left right away to seek a face to face meeting with the king of Aram. 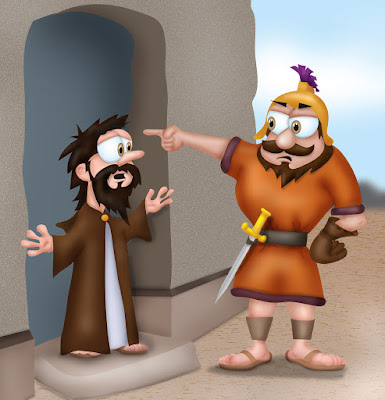 "I think you should go find this prophet right away!" The king said after Naaman had told him what the young girl had said. " I will write you a letter of introduction that you can give to the king of Israel. Also take 750 pounds of silver, 150 pounds of gold and 10 sets of new clothes with you." The king added as he sent Naaman on his way.

Naaman reached Israel and gave to letter of introduction to one of the palace guards who in turn gave it to the king. The letter said, " With this letter I present my servant Naaman. I want you to heal him of leprosy." When the king of Israel read the letter, he became very upset. "This man sends me a leper to heal! Who does he think I am? God? I think this is all a trick or an excuse to invade us again!" The king shouted.
News of the king's reaction reached Elisha. So Elisha sent a message to the king. "Don't get all upset. Send the leper to me. When he is healed, that man will know that the God of Israel is the one true God."
So Naaman took his horses, chariots, gold and silver to Elisha's house and knocked on his door. Elisha's servant answered. "I'd like to speak with your master." Naaman requested.
"Elisha the prophet said to to go wash yourself seven times in the Jordan River." The servant replied. "But I have come all this way. Can't he even come out to meet me?" Naaman replied angrily. The servant answered back. "Didn't you come here to get healed? Then do as Elisha has said." Then he closed the door.
Naaman turned and stalked away. "I thought he's at least come out to greet me and maybe wave his hand over me, say a prayer and call on the name of the Lord and I would be healed. Go wash seven times in the Jordan river he says! Why seven times? And aren't there cleaner and larger rivers in Damascus that I can wash in?" Naaman shouted as he stomped off in a rage. 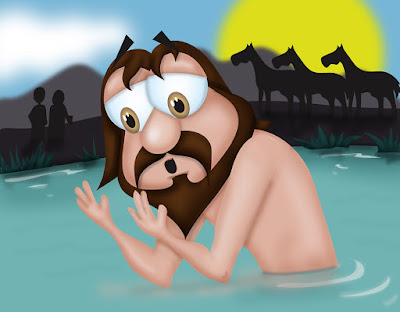 Sometimes we tell God what we want and how we want Him to do it. I'm sure God is very amused by us sometimes. :) The Bible says that God's thoughts are above our thoughts and God's ways are way above our ways. (Isaiah 55:9) God wants us to trust Him, even if it seems unusual. In all God does there is a purpose. Perhaps in Naaman's case, God wanted to help Naaman with his control and pride issues. Trusting God means acting in faith. If we are not doing what God asks, we do not trust Him with the outcome.

"Maybe you should give it a shot.." One of Naaman's officers said. "Yes! What do you have to lose?" Another added. "If the prophet asked you to do some amazing thing, wouldn't you have done it?  So why not do this simple thing and be cured." 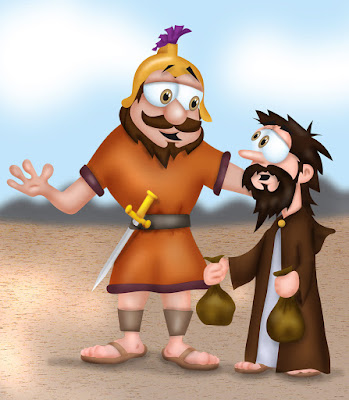 Naaman swallowed his pride and took his officer's advice. He went down to the Jordan river and dipped himself seven times. On the sixth dip there was no change.... but on the seventh dip, Naaman rose out of the water and he was completely cured! Naaman went back to Elisha's house and this time Elisha came out to greet him. "Now I know that there is no other God than the God of Israel" Naaman said."Here take this silver and gold as a token of my appreciation." He added.
"No," Said Elisha. "I will not accept any gifts." No matter how much Naaman urged him, Elisha refused to accept any of the gifts. So Naamn went on his way filled with joy at what the Lord had done.
But Gehazi, Elisha's servant, said to himself. "My master should not have refused such precious gifts. I will chase after Naaman and and get something from him." When Gehazi finally caught up with Naaman he said to him. "Guess, what? My master has changed his mind because two young prophets have shown up to his home unexpectedly. He would like 75 pounds of silver to help pay for their needs."
"Why certainly!" Exclaimed Naaman. "Take 150 pounds of silver!" Naaman said as he asked his officers to bag up the silver in two sacks. The men offered to carry it all the way back to the house but Gehazi said. "That's ok. I got it." He hid the money inside the house when he got home so that Elisha would not find it or know what he had done.
Elisha confronted Gehazi right away. "I know what you did and God knows it too!. Now you and your family will suffer from the same leprosy that Naaman had. When Gehazzi left the room, his skin was already as white as snow from leprosy! God knows all and sees all.

Posted by MrBibleHead at 5:54 AM No comments: