Elijah and the Contest on Mount Carmel (1Kings 18)

The drought in Israel was in it's third year. People were starving and dying of thirst. God told Elijah, "The time for the drought is nearing it's end. Go and present yourself to King Ahab." God was the one who told Elijah to go into hiding, now He was telling him to stand before the king. God's timing is always perfect. There are times that He wants us to be silent and other times that He wants us to speak up. Pray and listen for God's leading. 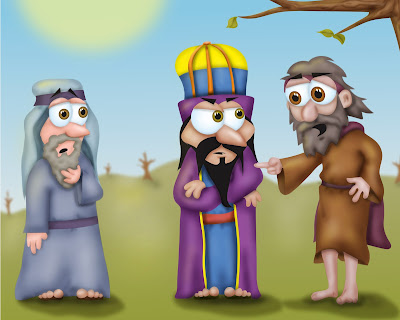 Meanwhile, in the midst of the drought, King Ahab was more concerned about his horses and donkeys than he was about the starving people in his kingdom. He called Obadiah, his right hand man, to help him scour the countryside to find food for his horses and mules. Remember Obadiah from last time? He is a loyal follower of the true God of Israel placed in King Ahab's service. Obadiah hid 100 prophets in caves when the queen, Jezebel, was trying to have them all killed. Sometimes God places us in ungodly places so that we can be a light in the darkness.

So, as Obadiah was out looking for horse food, Elijah was headed to the palace. They ran into each other along the way. Obadiah was shocked to see Elijah because King Ahab had been searching for him since the drought began. "Is, is that really you Elijah?" Obadiah asked.
"Yes, it is." Elijah answered. "Now go tell your master that I am here."
Obadiah was a little afraid to relay the message to King Ahab, for fear that the Holy Spirit would move Elijah into hiding again. But with some reassurance from Elijah, Obadiah went and told the king that Elijah had come and King Ahab went out to meet him. "
So Israel's great troublemaker has returned I see!" Ahab snarled. The king was referring to the drought. Ahab either couldn't see or didn't want to see that his worship of false idols is what brought on the drought.
As believers in Jesus, sometimes we bear the brunt of accusations. We get blamed for things that are clearly beyond our control. How do we respond? Don't argue or fight. Go to God and point others to Him. 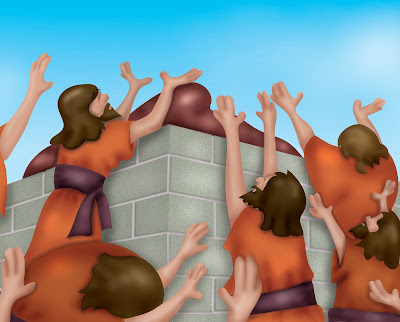 Elijah replied to the king. "I have made no trouble for Israel. God is responding with His mighty power to you, and your family because you have chosen to worship Baal instead of Him. Now go and bring the 450 prophets of Baal to Mount Carmel, and you may as well bring the other 400 prophets of Asherah as well. Then summon all the people of Israel. It is time for a contest of the gods!" Elijah didn't come up with this contest on his own. We see later in verse 36 when Elijah says that he has done this at God's command.

So Ahab gathered all the people of Israel. He brought the 850 prophets to Mount Carmel. Then Elijah began to speak to the people of Israel. "How long will you waver between two gods. You cannot be loyal to both! (Jesus said the same thing in Matthew 6:24) Today is the day that you will choose one or the other. If Baal is god.... choose him, but if the one true God of Israel is God.... then worship only Him!"
Then, at God's command. Elijah began to direct the set-up for the contest. "Bring me two bulls and some wood. The prophets of Baal get first choice. Let them choose a bull, prepare it and lay it on the wood on their altar." Elijah continued. "I will prepare the other bull on the other altar. Then call on the name of your god. I will call on the name of the Lord. The god who answers by setting fire to the wood is the one true God." And all the people agreed.

So the prophets of Baal prepared the bull and began to call on the name of Baal all morning, shouting, "Oh Baal answer us!" But there was no answer. They began to dance wildly and chant around the altar they had made..... but still not a hint of a reply.
By afternoon Elijah started to have fun with the situation and began to taunt the prophets. "Maybe your god is away on a business trip, or perhaps he is sleeping. Maybe he is in the bathroom or deep in thought. I think you have to call a little louder!" So they shouted louder and even began to cut themselves, thinking that would get Baal's attention.... but still nothing.

Sometimes we think that things of this world will satisfy our hearts. We try harder and harder to get them, and sometimes when we do get them, they don't satisfy. Giving all our attention and efforts to something and putting God second is a modern idol. It could be money, popularity, power, attention or material things. They eventually leave us feeling empty. But there is a desire in our hearts that can only be filled by a relationship with the one true God.

Next time we will see if Baal ever answers and the extravagant measures Elijah takes on the other altar.

Posted by MrBibleHead at 8:44 AM No comments: