When we left Moses last time, he was complaining to God that the Hebrews were worse off than when he arrived and asked the king to let them go. 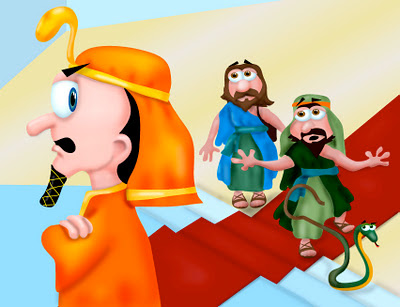 God said to Moses. “Don’t worry Moses. This is all part of my plan. The king will keep refusing to let the Hebrews go, and I will keep demonstrating that I am God. By the time I’m done with him and Egypt, he will be very anxious to let you go.” Then God continued. “Go tell the Hebrews that I will free them from slavery. They will be my own special people. They will always remember that I brought them out of slavery to the country that I promised to Abraham years ago.”
So Moses went and told the Hebrews what God had said, but they wouldn’t listen to Moses. They were still angry that they were being treated even worse now that Moses began pleaded to the king for their release. Moses went back to God.

"Now go tell the king to let the Hebrews go.” God told Moses.
“But LORD!” Moses exclaimed. “My own people won’t listen to me. How can I expect the king of Egypt to listen! I am not a good speaker at all. I stutter when I talk!”
God responded. “Your brother Aaron will be with you. He’ll speak the words that I command to the king. Don’t be surprised if the king still refuses. He is very stubborn. When he asks for a miracle, throw your staff on the ground and it will turn into a snake.” 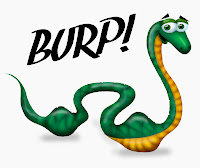 Moses and Aaron went back to see the king. Moses was 80 years old by now. The king asked for a miracle. Aaron threw the staff on the ground and it became a snake. The king called his magicians and wizards. With their magic, they also turned sticks into snakes! But guess what. Aaron’s snake ate the magician’s snakes! But the king was not swayed to let the Hebrews go. He turned his back on Moses and Aaron and asked his guards to remove them from his sight.

Moses returned to God. "The king is very stubborn. Go back to him and tell him that if he does not let the Hebrew people go, that I will turn the Nile river to blood.God said. “When the king says “No” point your staff at the river and it will turn to blood.”
Moses and Aaron returned to the king and he refused to let the Hebrews go. Moses pointed his staff toward the river and it turned to blood, but the king still refused. All of Egypt was suffering because of the king’s hard heart. New well had to be dug for water and all the fish in the river died and it started to smell really bad. 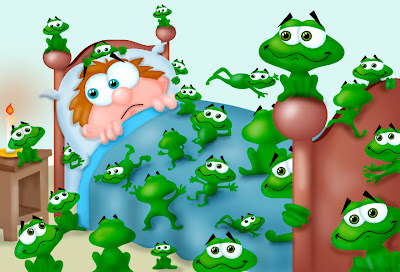 Moses got some further instructions from God. “Go back to the king and if he refuses to let the Hebrews go, that the whole land of Egypt will be covered in frogs. They will be everywhere, even in the beds and and kitchens and bathrooms.”
Moses and Aaron did as God asked and when the king refused AGAIN, Aaron pointed Moses’ staff toward the lake and millions and millions of frogs came out and covered the land! This got the king’s attention. He called Moses and Aaron into his presence. "If you get rid of all the frogs by tomorrow, I will let your people go.” The king said.

Moses prayed to God and God caused all the frogs to die. The egyptian people had to sweep up all the dead frogs and pile them up in the streets and it really began to stink. The king was glad that all the frogs were gone, but he had lied to Moses and Aaron and still refused to let the Hebrews go!


Trusting God is hard sometimes. Especially when we don’t see anything happening! But we have to remember that God is in control. "His ways are not our ways...they are better" :o) (Isaiah)
Posted by MrBibleHead at 2:54 PM 5 comments: