Elisha, the Woman From Shunem and two other miracles (2 Kings 4)

As Elisha was passing through the town of Shunem, a wealthy woman offered him a meal at her home. From then on, the woman would prepare a place at the table for him everythime he passed through Shunem. 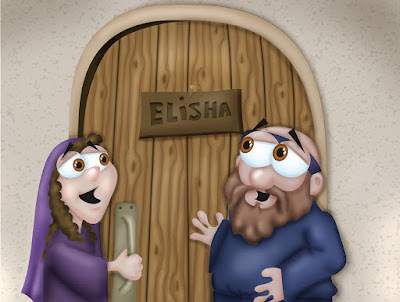 Finally one day the woman said to her husband. "Elisha is truly a man of God, we should give him a place to stay whenever he passes through Shunem. We can turn that spare room upstairs into a bedroom for him." Her husband agreed.
One day Elisha was passing through Shunem and went up to his room to rest. He told his servant, Gehazi, to tell the woman how grateful he was to have a room. Then he told his servant to ask her what he could do for her to show his appreciation.
"I'm good." The woman replied. "I have everything I need..... but thank you."
Elisha and Gehazi put there heads together and thought. "There must be something we can do for this woman." Then Gehazi spoke up. "She has this large house and no children and her husband is old."
"Yes! That's it!" exclaimed Elisha.
Elisha went to speak to the woman. "By this time next year, you will be holding a son."
"Please don't tease me like that, oh man of God." the woman responded.
Sure enough, the woman became pregnant and was holding a beautiful baby boy in her arms at that time the next year. 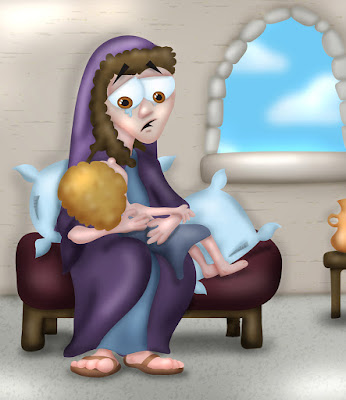 One day, when the boy was a little older, he went out to meet his father who was working in the fields. He started to feel sick and told his father that his head hurt really bad. His dad told one of the workers to take him back to his mother. The woman held her son on her lap, but he died. Sadly, she carried him upstairs and laid him on Elisha's bed. Then she saddled up a donkey and took one of her servants to travel to meet Elisha. While she was a long way off Elisha noticed her. "Go see what is wrong Gehazi, for the Lord has not told me." Elisha told his servant. The woman didn't want to tell Gehazi what was wrong. Finally when she reached Elisha she fell at his feet and said. " You told me that you would not tease me with a son. You got my hopes up and now......" Before she could finish, Elisha told Gehazi to grab his staff, hurry to the woman's home and place the staff on the boy's face.
The woman looked at Elisha, "Please come. I won't go home without you." So he went with her. 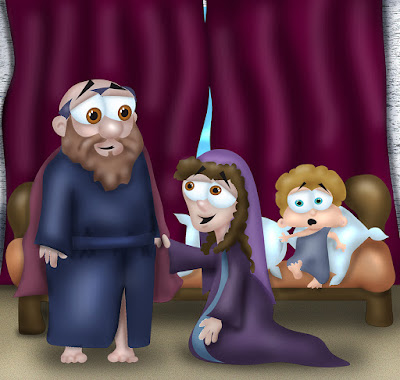 Gehazi arrived first and placed Elisha's staff on the boy's face, but nothing happened. Soon afterward Elisha and the boy's mother arrived. Elisha went up to his room and closed the door. He lay across the boy's lifeless body, matching his hands, mouth and eyes with his own. Soon the boy's body began to warm up. Elisha got up, walked around his room and did it again. Then the boy coughed seven times and sat up!
Elisha called the woman up to his room.When the woman saw her son sitting on the bed, she fell at Elisha's feet crying tears of joy! Then she picked up her son and carried him downstairs. Elisha and Gehazi said goodbye and left for Gilgal where there was a famine in the land.
In Gilgal, Elisha was sitting with a bunch of prophets. He told one of the young men to pick some vegetables and make a stew. After eating some of the stew, on of the prophets said. "There are poisonous gourds in this stew!" Elisha calmly said. "Bring me some flour." He put a dash of flour into the stew and it was ok. All the men ate and it did not harm them.

One day Elisha was speaking to a group of 100 prophets. A man brought him a sack of grain and some loaves of bread. Elisha told him to begin distributing the grain and bread so that all the prophets could eat. "But there is not nearly enough for all the men!" the man said. "Don't worry," replied Elisha. "There will even be leftovers!" ....and there was. Hundreds of years later, Jesus would feed 5000 men with a few fish and bread.

There is a definite theme throughout these stories. and it
is to listen to the needs of others, even when they don't say them out loud. That is called being sensitive to their needs. The woman from Shunem knew Elijah needed food  and shelter as he passed though the town. Elisha knew the woman wanted a son... and when she came to him after her son had died.... he heard her heart. Elisha also knew that the prophets would be hungry and he fed them. God calls us to be sensitive to the needs of others. As you go through your day and encounter people along the way, pray that God would help you hear what they are not saying with their mouth.
Posted by MrBibleHead at 1:18 PM No comments:

Elisha the Bears, a Poor Widow and a Little Flask of Oil (2Kings3 &4) 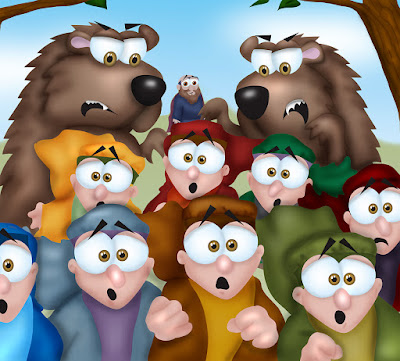 Elisha left Jericho and was on the road to Bethel. A bunch of young men began taunting him. Elisha knew he was in a bit of trouble because there were 42 of them and they kept getting more aggressive with their verbal attacks. Elisha also knew that even though it was 42 against 1, that he had God on his side. As the young men kept taunting and mocking him saying, "Go back you baldy! Go away you baldhead!" Elisha said to them. "In the name of the living God of Israel, curse you!" Just then two large bears came out of the woods and attacked the young men.

We should always remember that if we are on God's side, He is on our's.

Meanwhile, since King Ahab had died, his son Joram had become king of Israel. The country of Moab had always given a yearly tribute of 100,000 lambs and the wool of 1000,000 rams, but since Ahab died, they stopped giving. This made Joram very upset, so he got together King Jehosaphat of Judah and the king of Edom to join him in battle with Moab. However, they ran out of water on the way there, and the land was very dry and barren. "What have you gotten us into Joram?" the king of Edom asked. "Now we are all sitting ducks for the Moabites to come and wipe us out!"
The kings decided to call on Elisha. Elisha told them that by this time tomorrow, this dry valley will be filled with pools of water, even though there will be no rain. He also told them that they will defeat the Moabites. And sure enough, the next day there were pools of water everywhere.
The Moabite army that was positioned on a hillside, looked down into the valley. The sun was shining just right on the pools of water and it made them look like pools of blood! "The three armies must have attacked and killed each other!" They said to themselves. Then they ran down into the valley to gather up the items of value that were left. But upon reaching the valley, they were surprised by the three armies and quickly defeated. Just as Elisha had prophesied.

One day a widow of one of Elisha's fellow prophets approached Elisha. "My husband has died. He was a man of God as you are, but now I am broke and a creditor has now come and threatened to take my two sons as slaves."
"Tell me, What do you have in the house?" Elisha asked. 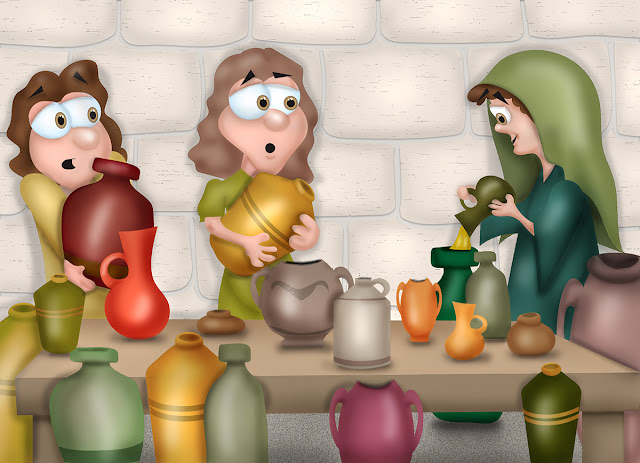 "Nothing except a small flask of oil." She replied.
Elisha then said, "Borrow as many empty jars as you can from your friends and neighbors. Then you and your sons go into the house, shut the door behind you and begin filling the jars from your small flask, putting the jars aside as you fill them."
So her sons gathered as many empty jars as they could from all over the neighborhood. The widow filled them until every last jar that was brought to her was filled to the brim. "Bring me another jar." The widow said. But the sons told her that there were not any more jars. And then the oil stopped flowing.
The widow excitedly told Elisha what had happened. Elisha responded. "Okay, now go and sell all the oil, pay off your debts and there will still be enough left over to support you and your sons.

Isn't God amazing! God can do more with the little bit that we have than we could have ever thought! If the sons would have only collected two jars, then the oil would have stopped flowing after the two jars were filled. Come before God with open hands and open hearts. Not open hands with hopes of getting something from God, but in a posture of surrendering what we have to a God that can do amazing things!
Posted by MrBibleHead at 8:57 AM No comments: