Once again the angels came to present themselves before the LORD..... and once again Satan was there as well. Satan told God that he was continuing to move across the earth, checking things out.
"Well, you must have seen that Job, the man you tested, has still not sinned, even though I allowed you to do some terrible things to his property and his family." God said.
"Of course he didn't curse you or sin against you!" Satan retorted. "You have protected him from harm. A man would gladly trade everything he has as long as he is safe and in good health." Satan continued, "If you let me inflict his body with some disease or malady..... then I'm sure he will curse you and turn his back on you!"
"Job is upright and blameless. He fears God and shuns evil. I will let you do what you have said, however, do not kill him." God responded.
So Satan went out from the presence of the LORD, and struck Job with painful boils from his toes to the top of his head. Job was in such intense pain that he went and sat on the ashes at a garbage dump. He found something and began scraping his skin because the boils were so itchy. 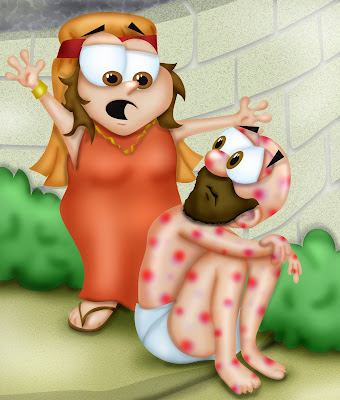 How would you respond if you were Job? Of course we all feel like there are times when everything seems to be hitting us all at once. In Job's case, it really was! There are many choices we can make when facing the difficulties of life. 1. We can feel sorry for ourselves. 2. We can get angry at the situation, people around us, or God. 3. We can throw our hands up in the air and give up. 4. We can trust God (Proverbs 30:5), know that He loves us (1 John 3:1), and that He would never leave us (Deuteronomy 31:6).

Job chose to trust God. He knew that God loved him and that God would not leave him. Job's wife on the other hand chose differently. We cannot be too hard on Job's wife though. Remember, she too lost all her possessions and her children.  Now she was watching her husband suffering right in front of her! So I can understand her response to Job's pain when she said to him, "Job! Are you still clinging to your integrity? Enough is enough! Just curse God and die!"
Job answered his wife,  "My dear wife, you are  foolishly speaking out of anger and fear. Are we supposed to accept all the good things that God gives us, but not accept His decision when He takes things away?" In all his suffering, Job did not sin with his lips.

Job realized that God does not owe us anything and that every good thing that God gives us is a gift. (James 1:17) 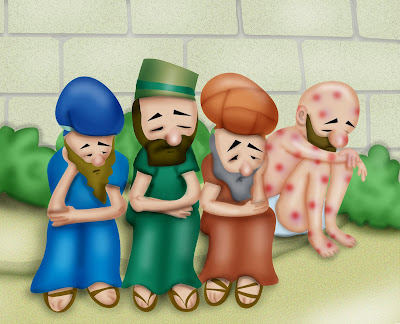 Three of Job's friends, Eliphaz, Bildad and Zophar heard about all that had happened to Job and decided to go as a group to comfort, console, and mourn with their friend. They heard that Job was sitting near the garbage dump and headed toward it. While they were a distance off, they saw a man sitting there, but he was covered by so many boils that they did not even recognize him.  When they finally realized that it was Job, tears filled their eyes. They tore their robes and put ashes on their foreheads. Then they sat down with Job in silence for seven days. Seven days was the customary time of mourning for the dead. (Genesis 50:10) Job's friends joined him in mourning for his children as well as for his circumstances.
Job's friends had good intentions. They loved their friend.  Their compassionate presence was just what Job needed at the time. We can learn from them. Sometimes a ministry of presence is just what a person needs when they are mourning of suffering. No words, just compassion and care.
In the next 35 chapters we will see how Job's friends opened their mouths and messed up the good they had done by initially sitting with Job in his grief.

Posted by MrBibleHead at 9:47 AM No comments: