We just finished the story of Joseph, and even though he lived hundreds of years before Moses, the stories are connected. Joseph brought all of his relatives over to Egypt because it was the only place that had food. The king at the time loved Joseph because of all that he had done for him and for Egypt and he didn’t mind all the Israelites living in Egypt. The Israelites had many children. Their children had many children. Many years after Joseph had died, a new king forgot all about Joseph and how he helped Egypt. He was just worried that there were too many Israelites, and that they might start a war and take over Egypt. So he  used his army and forced the Israelites become slaves to the Egyptians. The king wanted to build a huge city, so he used the Israelite slaves to make bricks out of hay and mud. The Israelites were not treated very well.

The Israelites kept having children and the king was getting more nervous than ever. He told the Egyptian nurses to kill the baby boys as soon as they were born.  Months and months later, the king noticed that there were still many Israelite boys being born so he called the Egyptian nurses before him. “Didn’t I order you to kill all the slave boys right after they were born? Then why am I seeing all these little slave boys everywhere?” He scowled.

“Yes my king, we tried to follow your orders, but the Israelite women have babies so fast, that the babies are born and already in their mother’s arms by the time we arrive.” Said one of the nurses. 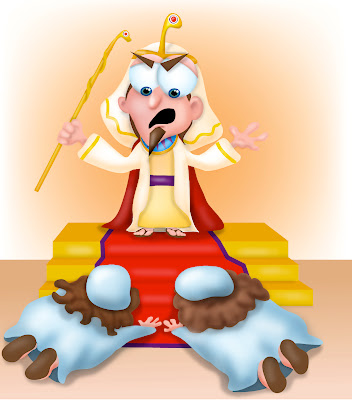 The nurses knew that it was wrong to kill the babies, so they purposely took their time getting to the Israelite women when they were having their babies.  God was pleased with the nurses and blessed them with many children of their own.


The king was getting angry.  He made it a law, that all slave boys, born from this day forward, must be thrown in the Nile river! The baby boys would drown if the crocodiles didn’t eat them first. The Israelites hated being slaves and they hated the kings laws. They prayed that God would free them. 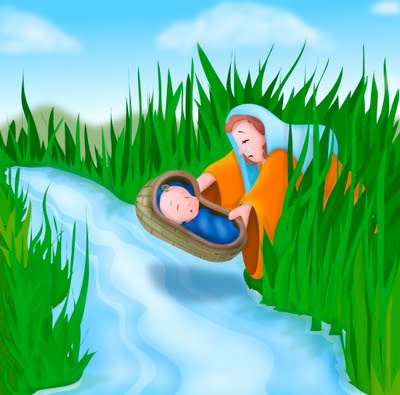 An Israelite woman had a baby boy. Her and her husband hid the baby for three months. When they knew that they could hide him no longer, they mad a difficult decision. The baby’s mother made a basket out of papyrus (which they used to write on. It’s where we get the word paper) and his father coated it with tar so it wouldn’t sink.


They wrapped the baby in a blanket, placed him in the basket, set him in the Nile river and prayed. The baby’s older sister, Miriam, ran along the banks of the nile and watched as the current carried the basket with the baby further and further from his family. Wow! That must have been so hard for the family!  The baby didn’t have a name yet, but we know him as Moses. Next time we’ll find out if the crocs got him! What do you think?
Posted by MrBibleHead at 3:49 PM 1 comment: