Last time we left Moses, his brother Aaron and the Hebrews, they were all camped out near a lake that God had transformed into sweet drinking water for them. The Hebrews were happy. The next day, the cloud of God’s glory began to move, so the Hebrews got their belongings together and began to follow.
After about a month, they had eaten all the food that the Egyptians had given them when they were freed from slavery. The Hebrews were now getting hungry and began to moan to Moses. “We would have been better off remaining as slaves to the Egyptians, at least we were fed well.” The complainers grumbled. “Now we are going to die of starvation out here in the desert.”

Poor Moses. He had to listen to all the complaining. He knew that God had not freed them, just to let them die in the desert. He knew that the Hebrews had it very bad in Egypt. They were only remembering the food and forgetting about how they were told to kill their first born sons and how they were treated like dirt. Moses knew that God told him that He would take care of them, but poor Moses had to listen to all the grumbling. The Hebrews were acting like it was all up to Moses, like Moses led them out there and Moses was going to get them all killed.

Finally Moses had a talk with his brother Aaron." Tomorrow, I will stand before the cloud of God’s glory.” He said. “I want the people close enough to hear and to see God’s glory, then they will know who is in charge. Maybe then, they will quit grumbling and just trust in God.”
The next day, as Moses approached the cloud, Aaron gathered the people and told them to look way into the wilderness. When God spoke to Moses, the people were amazed at God’s glory.  God told Moses that He would give the Hebrews food every morning but there were some rules. God told Moses that every morning the ground would be covered with bread from heaven. The Hebrews were to pick up no more than 2 quarts for each person. (enough for one day) then on the 6th day, they were to pick up 4 quarts. (enough for 2 days) .

The next morning, after the dew melted, the ground was covered with white flakes. The Hebrews went out and gather 2 quarts, just as God had said. However a few Hebrews were worried that they would not get food tomorrow, so they gathered more. When they woke up the next day, the flakes smelled rotten and were covered with worms! On the sixth day, they gathered 4 quarts each. On the seventh day, some Hebrews didn’t trust God’s Word and went out to gather more flakes, but there were no flakes to be found! God was angry at the Hebrews that didn’t trust Him. And He told Moses that He was.

The flakes tasted like nothing the Hebrews ever had before. It was so delicious! God is a great Chef! No one knew what to call it, so they named it Manna. (Which means....What is it?) I guess you can say that I made Manna for dinner a couple of times, because no one knew what it was. ;o)
Every morning God would rain down manna from heaven and every morning the Hebrews would gather it up.  Moses was probably very happy that they weren’t complaining or blaming him any more.


A couple of weeks later, and a few miles later, the Hebrews were getting thirsty again because they hadn’t had any water for a couple of days.
“Is God going to just leave us out here to die of starvation?” They grumbled. "We had enough water back in Egypt!” Poor Moses. Even seeing the glory of God and God providing them with food every day, hasn’t stopped their complaining, but now they were blaming God!
“Why are you testing God’s patience with you?” Moses asked. Then the men began to threaten Moses. He ran to God and pleaded with Him. “Please God, the men are going to stone me if we don’t find water soon!”
" Take a few of the men that you can trust and you staff. I will lead you to a rock. I want you to strike the rock and water will pour out of the rock so that everyone will be able to drink.”God said. 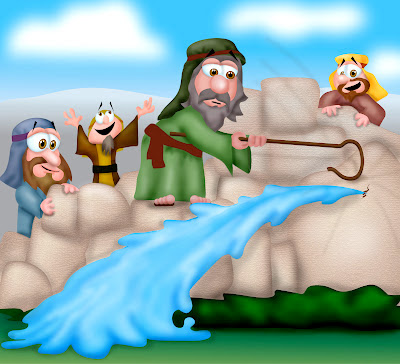 Moses did as God instructed and water poured from the rock as some of the men looked on. There was enough water for everyone. Moses named that area The Place of Testing and Arguing.

The Hebrews looked at Moses as the man who led them out of Egypt and as the man who was going to let them all die in the desert. God wants us to know that He is in control. He may work through men, but God didn’t want the people to depend on Moses and to blame him.  He wanted them to depend on Him. Just as He wants us to depend on Him and to come to Him with out hearts. There is a verse right in the very center of the Bible (Psalm 118:8) that says “It is better to trust in the Lord, than to put confidence in people.”
God also called Himself," God Who Provides”. It is good to remember that God (who takes care of the birds of the air  Matthew 6:26) provides all we need. Sometimes we WANT more than we NEED though.
Posted by MrBibleHead at 7:00 PM 2 comments:

Last time we were right in the middle of an amazing miracle! God had parted the Red Sea so that Moses and his brother Aaron could lead the Hebrews to safety. God had placed a cloud of darkness over the Egyptians so that they couldn’t go anywhere. God had also placed his light above the Hebrews so that they could see their way over the dry land where the Red Sea had parted. God is so amazing!

While the Egyptians were in the middle of the Red Sea, God caused the wheels to fall off of some of the chariots! There were no ordinary chariots either. These were the best chariots that the king had! The Egyptians began to get scared and confused. Some of them started going in circles. “Let’s turn around!” Some of the king’s men said. “The God of the Hebrews if fighting against us!

Then God told Moses. “Now stretch your staff over the Red Sea!” Moses did as God had commanded and the waters began to flow back into the sea. The king and all his men were drowned that day. The Hebrews knew that God had truly freed them from the Egyptians that day! They stood on the other side of the Red Sea in amazement! They praised God and sang him a song. The Song is written down in Exodus 15:1-21. 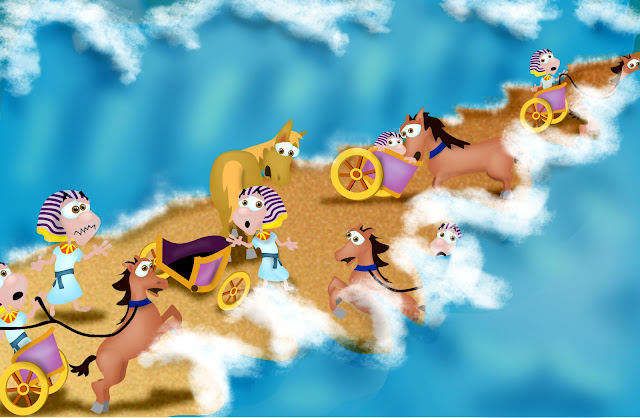 Remember Moses’ sister Miriam? The one who watched as Moses was pulled from the Nile river by the king’s daughter. She shook a tambourine. Then led the singing and dancing and the praises to God.

That day the Hebrews began their journey to the promised land. God was still leading them with a cloud at day and a flame at night.  They traveled tree days through the wilderness, but couldn’t find any water. The Hebrews were getting pretty thirsty. Finally the saw a lake! They ran as fast as they could. But when they reached over and sipped some of the water from their hands, it was bitter! What a disappointment. The name of that place was Marah (which means bitter)
Now the same Hebrews that were singing and dancing just three days earlier, were all upset at Moses and God. “What are we supposed to drink?” They complained.
Moses prayed and God pointed out a stick lying on the ground to Moses."Go throw it into the lake.” He said.
When Moses did as God had said, the water became sweet and the Hebrews drank till they were satisfied.

Sometime I complain when things don’t seem to be going my way. Instead, I should think about all the wonderful things that God has done for me.  The key word today is   REMEMBER. God constantly told the Hebrews to remember what He had done for them and who He is. We have to REMEMBER too. When we think about what we don’t have, we forget what we DO have. REMEMBER.
Posted by MrBibleHead at 2:46 PM No comments: