Hi guys! I’m back to finish the story of Balaam and myself. So where did I leave off?...Oh yeah... 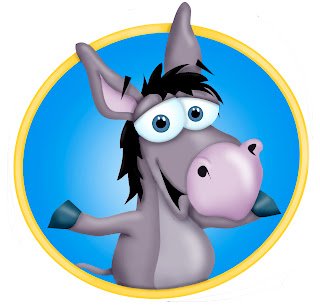 ...So when Balaam and I finally arrived, king Balak asked, “Why did you turn me down the first time Balaam? Didn’t my men tell you that I was going to make you rich if you would just curse the Israelites? Well at least you are here now. Tomorrow we head up to the top of Bamothbaal . We can see all the Israelites from there and you can curse them there.” 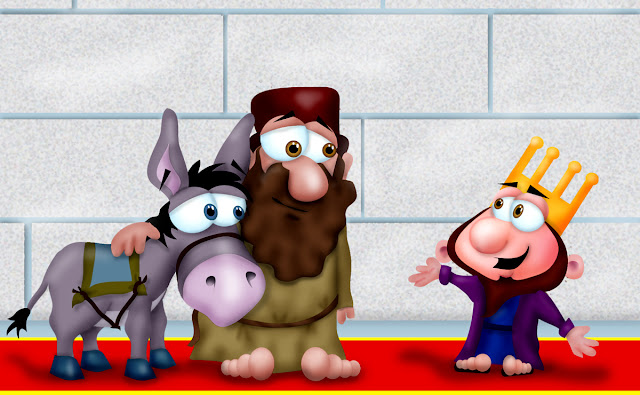 Balaam remembered with fear the angel and the sword, and how the angel told him to do only what God told him to do. “I can only do what God tells me to do and speak what He tells me to speak.” Balaam said to king Balak.
The next morning we headed up to Bamothbaal where we could see all the Israelites below.  Balaam had the men build 7 altars there and he made a sacrifice to God on each altar. “Let me go to the top of that hill and see what God wants me to say.” Balaam requested.
So we went up the hill and God spoke to Balaam. When we came back Balaam told king Balak what God had said and the king was not very happy! God told Balaam that the Israelites were his chosen people and that they were set apart for God’s purposes. And that they would become more numerous than the stars in the sky.
King Balak turned bright red! “I asked you to curse my enemies and you blessed them instead!”
“I tried to tell you that I can only speak what God wants me to speak.” Balaam replied. 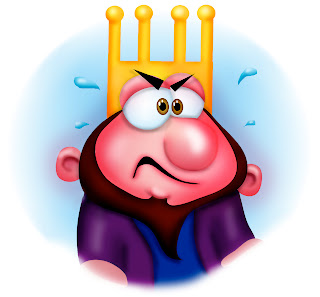 King Balak took Balaam to another place where we could see about half of the Israelites. “At least curse half of my enemies.” King Balak said. But again God told Balaam to bless the Israelites. So the king took us to another place and the same thing happened. King Balak was furious. He shouted at us. “I asked you to curse my enemies three times, but all three times you have blessed them instead! Get out of here! I am not going to pay you a single penny! God has just stopped you from becoming a very rich man!” 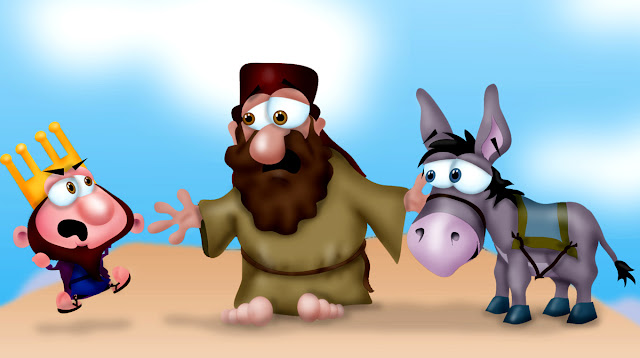 Balaam responded to king Balak’s ranting and raving. “Even if you gave me all the gold and silver in your kingdom, I could only do what God wanted me to do and speak what God wanted me to speak. We will go now, but God wants me to say one more thing before we go.... 'The Israelites will conquer many nations on their way to the promised land. The nations will be destroyed by God’s mighty hand including this one!"  Then we left king Balk there and headed home.
Balaam was right. The Israelites, led by Moses, continued to win one battle after another on the way to the promised land. They took all the gold, silver and animals from each nation that they conquered. Balaam was killed in one of the battles and the Israelites took me and 61,000 other donkeys back to their camp. Moses had divided the Israelites into 12 tribes and then divided all the gold, silver and animals among God and the twelve tribes. God got the first of everything. One tribe took care of God’s stuff. That was the tribe of Levi. I ended up in the tribe of Judah. ( The ancestors of Jesus!)
Moses called all the Israelites together. He told them that he was 120 years old and that he wouldn’t be with them for too much longer. He appointed Joshua to be the next leader to take the people into the promised land. Then Moses wrote a song about how God had freed them from slavery and all the things that He did for them along the way. The song of Moses is recorded in the Bible in Deuteronomy chapter 32. He wanted everyone to learn the song and teach their children and grandchildren the song so that they would never forget how God freed them, saved them and loved them.  Then Moses blessed the people. After that Moses went to a the top of Mount Nebo where God showed him the promised land. Then Moses died on top of the mountain.
“There has never been another prophet like Moses whom he Lord knew face to face. The Lord sent Moses to perform miraculous signs and wonders in the land of Egypt against Pharaoh, all his servants, and the entire land. And it was through Moses that the Lord demonstrated His mighty power and terrifying acts in the sight of all Israel.” (Deuteronomy 34: 10-12)

Two lessons we can learn today. One: That God has a big plan (His sovereign plan) and nothing or no one can stop it. He also has a small plan (individual plan) for each of us. This is where we can choose to do the will of God or not. God’s small plan for us is part of His big plan. If God can’t use us because we choose not to, he will make life hard for us or find someone else. Either way we lose out on the blessing that God has for us when we do follow Him.
The second lesson is that God wants us to remember what He has done for us. Moses wrote a song so that the Israelites would never forget. Stop and think about all the great things that God has done for you and has given you. Then thank Him every day.

Some interesting facts about Moses:
(A) Moses was 120 years old when he died. His life can be broken into three forty year segments. (1) 0-40 He was raised as the son of the Egyptian king. (2) 40-80 He spent these years in the desert after he killed an Egyptian. (3) 80-120 He was the leader of Israel, leading them out of Egypt and to the gate of the promised land.
(B) Moses wrote the first five books of the Bible. They are called The Pentateuch.
(C) Moses was buried by God on the mountain and no one has ever found his body.
(D) “Moses” means “taken out of the water"

Posted by MrBibleHead at 4:13 PM 8 comments: