After David left Jonathan, he ran to the city of Nob to see Ahimelech the priest. Ahimelech got a little nervous when he saw David and asked him. "Why are you here?"
"I am on a special mission from the king." David replied. "Do you have anything for me to eat?"
"No, just the holy bread. (This was bread that had been placed in the temple, but had been replaced earlier that day with fresh bread.) You can heat it only if you have kept yourself pure recently." Ahimelech added.
So David ate the holy bread., because he had kept himself pure. Then David asked the priest, "Do you have a sword or any kind of weapon." 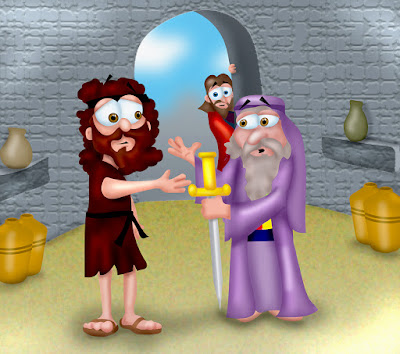 Ahimelech answered, " Do you remember when you killed the giant named Goliath?" David nodded yes. "Well the king's men brought his sword here. It is wrapped in cloth in the back room. I will get it for you."


While David was standing there he saw Doeg, one of Saul's chief herdsman who was there for ceremonial purification. David knew that Doeg had not heard that Saul was trying to kill him yet, but he knew he had to leave there before word reached him. David took Goliath's sword and left. He ended up in Gath. (The city that Goliath came from)  David asked to see the king there, but the guards were not happy about it. They knew who David was. They escorted David to the king's throne. On the way, the guards were grumbling about how David was honored in Israel with singing and dancing. David heard the grumbling of the guards and became afraid. He realized that going before the king was not a very good idea. So David pretended to be insane, scratching on doors and drooling down his beard. The king took one look at David and said to his guards. "Why have you brought this madman before me! We already have enough madmen in my kingdom. Take him away!" 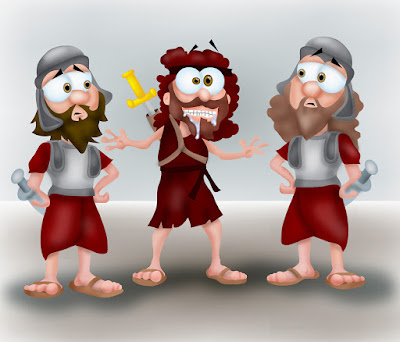 David left Gath and found a very large cave in Adullam. He stayed in the cave for quite some time. Some other men who were discontent with Saul, heard about where David was staying and joined him in the cave. Soon David was the leader of about 400 men there. 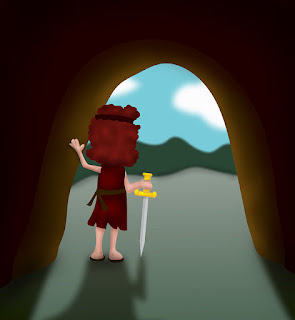 One day Saul was ranting and raving about how everyone was against him. "Even my own son Jonathan is encouraging David to kill me, and none of you even whispered a word about it to me!" He shouted.  Many of Saul's men were around him listening to the king's bellowing. Then one his his officers, Doeg, spoke up. "When I was at Nob for the purification ceremony, I saw David talking to the priest there. I saw the priest consult the Lord about what David should do. Then he handed him Goliath's spear."
Saul was outraged! He sent for the priests of Nob. (Eighty-five in all) He brought Ahimelech before him and accused him of treason. The priest defended himself by telling Saul that he had no idea that Saul was after David. It was not the first time that David had visited Nod asking for the priests to consult the Lord.
"You will surely die!" Saul shouted. "Along with your entire family" Saul ordered his officers to kill all the priests, and they did what he said. Then they went to Nod and killed the priest's family. Only one family member escaped. Abiathar, the son of Ahimelech fled to David's camp and told him that Saul had killed all the priests and their families.  David knew that Doeg must have told Saul about their chance meeting at the temple in Nob. "Stay here with us and we will protect you from the king who wants to kill us both." David told Abiathar.


It is hard to believe that Saul was once a king who turned to God. Now he was getting more evil as the days passed. Once we turn away from God, things become more unclear. Right and wrong get muddled. Sin is turning away from God. The more we sin, the more separated from God we become..... the more we sin. When we find ourselves in that downward spiral, admit the wrong, stop the sin and turn back toward God. This is called repentance.
Posted by MrBibleHead at 2:41 PM 1 comment: