Consequences of the Census (2 Samuel 24)

So the anger of the Lord burned against Israel because they had rebelled against His decision.... again. God used David's sin to enact punishment against the entire nation of Israel. When we left last time, the prophet Gad had relayed God's message to David. David had a choice to make about the punishment that would be executed against the nation of Israel. Here were the three choices. Either three years of famine, three months of fleeing from their enemies or 3 days of a deadly plague.

If you had a tough decision like this, what would you choose? I know what I would NOT choose. Since I would be the king, I wouldn't have to worry about a famine, because the king had plenty of food stored up. Or I wouldn't have to worry about fighting off the enemy, because as king, I would be protected at all cost. I wouldn't pick the plague, because death could strike anyone at any time. As king, I would be as vulnerable as anyone else in the kingdom. So that would definitely NOT be one of my choices..... but that is exactly what David chose. He knew that he had sinned. (he takes full blame at the end of the chapter) and he says in verse 13., "Let me fall into the merciful hands of our Lord. If he sees fit to inflict me, then so be it." 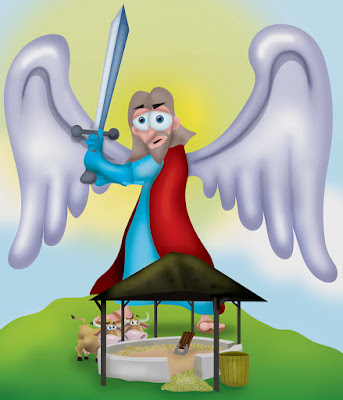 So the Lord sent a plague upon Israel and it last three days. Seventy thousand people died throughout the nation. But as the death angel was in Jerusalem, he stopped at the threshing floor of Araunah. (A threshing floor was a hard floor where a wheat farmer would crush his crop to remove the grain from it's husk by having oxen drag a large heavy board over it) When David saw the angel of the Lord. He prayed that the plague would end and that if anyone else should die, it would be David himself. Just then Gad the prophet came to David and said, "Build an altar to God on this very site. So David went to Araunah, the man who owned the site where the altar was to be built. Araunah was a little nervous because the king wanted to talk to him. "Why have you come my lord?" he asked.
David replied. "I have come to buy your threshing floor so that I could build and altar to the Lord there, so that He will stop the plague."
"Please take it my lord. And here are some oxen for the offering and wood to make the fire. I will give it all to you, and may the Lord your God accept your sacrifice." Araunah answered.
David insisted. "No. I must pay you for the place, the oxen and the wood. For what kind of sacrifice would it be if it cost me nothing?" 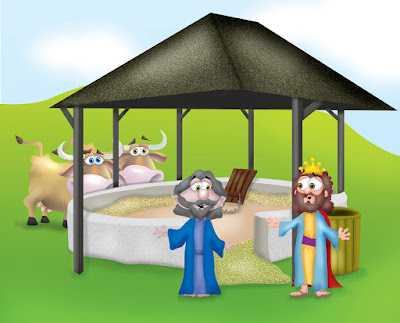 The word sacrifice itself means to give up something. If David took the threshing floor, the oxen and the wood and offered it up to God, it would have been Araunah's sacrifice. We must remember that when we live our lives for Jesus, we are giving up our own desires and plans and replacing them with God's. But the amazing thing is that God loves us so much! His desires and plans for us are for our own good. He wants the best for us! The Bible says that the more we give up for Him, the more we have! That is called a paradox, and the Bible is full of them. (The last shall be first..... the humble will be exalted... to name a couple of examples.)

So David bought the threshing floor, the oxen and the wood. Then he built and altar and sacrificed to the Lord. The plague stopped right there at the threshing room floor!

The amazing thing about where that threshing room floor was located was that it was on Mount Moriah. The same place where Abraham was willing to sacrifice his son Isaac to God a thousand years earlier. And it is also the same place where Jesus sacrificed his life for us on the cross a thousand years later! God is so amazing!
Well that finishes the books of First and Second Samuel. Next time we will be starting First Kings.
Posted by MrBibleHead at 11:30 AM No comments: