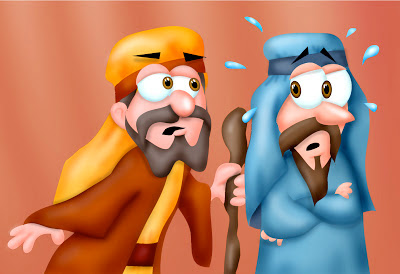 So Joshua called all the Israelites out of their tents. He wanted to find out who committed the sin that caused 36 men to die in a battle that the Israelites should have easily won. Each family belong to a clan. There were many families in one clan and each clan belonged to a tribe. There were many clans in each tribe. There were twelve tribes. God told Joshua to begin with the tribes. Joshua called the tribe of Judah to come forward. This meant that the person who committed the sin belonged to this tribe. Achan probably got a little nervous, but there were very, very many people in the tribe. Then Joshua called the clan of the Zerahites to come forward. Achan belonged to this clan. He was getting a little more nervous, but there were still a lot of people in the clan. Then Joshua called out all the people in Achan’s family. Now he was getting really nervous! Joshua walked past Achan’s family members. God told Joshua to stand in front of Achan! Achan broke out in a sweat as Joshua spoke. “Give God the glory and confess to what you have done.”
“Yes! Yes! Yes! It was me! I saw the beautiful robe and the gold and silver. I wanted them so bad. So I took them and buried them in my tent! Joshua sent some men to dig up the items. They brought them back and Laid them out. Achan was put to death because he had caused the death of 36 men. 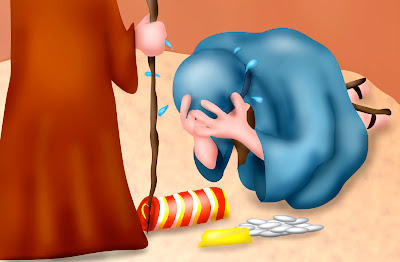 Achan’s sin followed a very common pattern that we can be aware of in our own lives. He said that (1) He saw it (2) He wanted it badly (3) He took it. First we see something or an opportunity. Then we think about it. Then we act on it. We think with our minds. We can stop that sin right in it’s tracks (2Corinthians 10:5) when we have our mind focused on God and not ourselves.(Hebrews 12:2) Achan thought that he would never get caught. That is not a reason to do anything. God loved us so much that he sent His Son, Jesus to die for us.(John 3:16) We should do what is right to show God that we love Him back. God doesn’t want us to do the right thing because we are afraid of getting caught or because we feel that we have to do what He expects. He says that if we love Him, we will obey Him.(John 15:15)  Do you love God? Here is an easy (and enjoyable) experiment. Go up to your mom, dad or grandparent and hug them. They hugged you back. Right? Now ask them why they hugged you. I’m sure they will say because they love you. The will NOT say “Because I thought you’d notice if I didn’t hug you back.” or “I thought you’d get mad if I didn’t hug you back.”or “Because I thought that’s what you wanted.” When God sent Jesus into the world, He was giving us a great big hug. When we obey Him, we are hugging Him back! Do you want to give God a hug? Next time you are tempted to do something wrong, think about God hugging you and hug Him back by doing the right thing.

The next morning Joshua led an army and conquered the city of Ai. (The same city that had defeated them the week before). Here is what he did. Joshua told a bunch of his soldiers to hide in the wilderness near Ai. Then he took some of his men and marched toward the city. When the city of Ai saw Joshua and his men they thought to themselves. “Here come those Israelites again. We will chase them back to the hills like we did last week.” So the Ai army charged Joshua and his men. Joshua and his men turned around and ran for the hills. Then the Ai army smelled smoke. They turned around and saw their city burning to the ground. Then Joshua and his men turned around and defeated the whole army. (About 12,000 men).
Afterward, Joshua built an altar there and thanked God. He called all the Israelites together. He reminded them of God’s commandments and he read the first 5 books of the Bible to all the people. (That was all that was written so far) And the people praised and worshipped God.

Today we learned the pattern of sin.( 1)See it. (2)Want it. (3)Take it.
We also learned that God doesn’t want our obedience because we are afraid of getting caught or because it is expected. Our obedience is like a hug to God.
Finally we saw that Joshua built an altar to thank God. We should always thank God for what we have because “Every perfect gift comes from Him.”(James 1:17)

Posted by MrBibleHead at 12:04 PM No comments: