Back in Egypt, the king and all the Egyptians had a change of heart.
“Wait a minute!” Said the king. “Now we don’t have anyone to do all the work!” 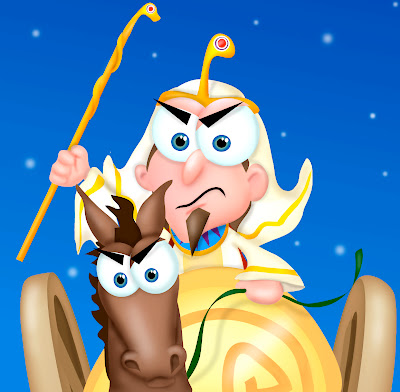 One of the Hebrews saw the lights of the Egyptian army coming over the horizon. “Oh no!” The Hebrews shouted in horror! They were upset at Moses. “Weren’t there enough Cemeteries in Egypt? You had to lead us out here to the desert to die! We were better off as slaves in Egypt, than dead bodies out here in the wilderness!”

“Don’t be afraid.” Said Moses. “What what God will do. See all those Egyptians.... Take a good look at them because you’ll never see them again! God will fight the battle.... Now keep your mouths shut!”
Moses went to God and cried out and prayed. God told Moses to stop crying out and to cut his prayer short. “Get moving.” God told Moses. “Stretch out your staff toward the Red Sea. The water will separate and for a wall on two sides. You and all the people will be able to walk across on dry land”

Meanwhile, the God cloud that had been leading the Hebrews through the desert, was now between them and the Egyptians. God made it so dark for the Egyptians, that they couldn’t see anything. So they had to stay put. God lit the way for the Hebrews so they could see where they were going. 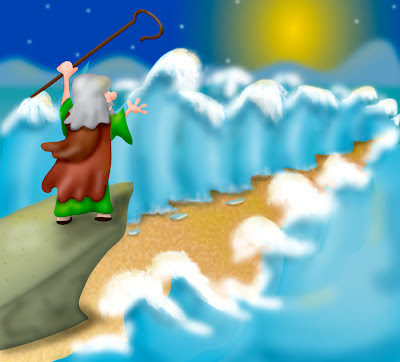 Moses stretched out his staff over the water, and the water began to part. The Hebrews had been witnesses to a lot of amazing things that God had done, and this was near the top[ of the list! The water parted and the land became dry as a bone! All 2 million Hebrews walked across the Red Sea on dry ground that night as God’s light guided them and his cloud held off the Egyptians!

Did God help the Hebrews because they were moaning and complaining? No, He already had a plan for them to escape. God doesn’t like complaining as you will see as the Hebrews go through the wilderness. They do a lot of complaining. Complaining all the time just gives us a bad attitude and makes us miserable. In Proverbs, the Bible says that the complainer’s days are hard, but the content (which means happy with what we have) person’s days are like a feast!  Next time you feel like complaining.... think of ALL the wonderful things that God has given you. (The Bible says that every good and perfect gift comes from God.) ... and thank Him. You’ll be amazed how much better your day is!  Besides, complaining doesn’t do any good anyway :o)
Posted by MrBibleHead at 1:08 PM No comments: