The Walls of Jericho Come Tumbling Down!

The city of Jericho was terrified! Rahab and her family waited patiently as they were gathered in her home, which was built right into the wall, the red rope hanging from her window. On the seventh day, the priest gave a loud long blast from their horns and all the Israelites gave a might shout!.....And the wall that surrounded the city came crashing down! Unbelievable! I’m sure the Israelite army was so amazed at what God had done! 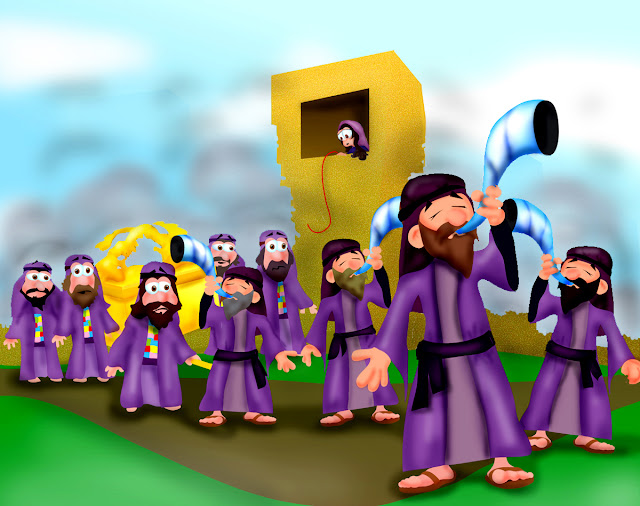 Joshua shouted out orders. “Leave everything in the city to be burned unless you find gold, silver, bronze or iron. Take these things to be put into the Lord’s treasury. Do not keep anything for yourselves!”  Then he told the two spies that had been hidden by Rahab (remember a few weeks back, Rahab hid the Israelite spies when they came to check out the city of Jericho?) to go and bring Rahab and her family to safety. 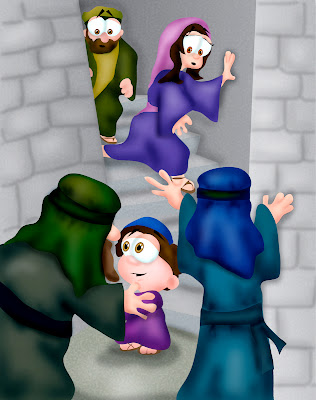 But wait a minute! The wall came crashing down and Rahab’s house was built right into the wall. Surely her house and her family were destroyed when the wall came down. No. God miraculously spared Rahab and her family! The entire wall collapsed, but God honored the promise that had been made to Rahab for her protection by the two spies. She is even mentioned again in the New Testament in the book of Hebrews because of her faith. The two Israelites found Rahab and her family and brought them back to the Israelite camp.

Meanwhile, The Israelite army gathered all the Gold, silver, bronze and iron for the Lord’s treasury. Then they set fire to the city and burned everything in it. The people in Jericho were very bad people and God didn’t want any of them or their belongings around to corrupt the Israelites as they entered the promised land. Joshua led the Israelite army back to camp. All the gold, silver, bronze and iron was put into the treasury of the Lord. All but a brick of gold, 200 silver coins and a beautiful robe. One of the soldiers broke the law of God and kept some for himself. His name was Achan. While the rest of the Israelites were celebrating the victory, Achan was in his tent digging a hole. He buried the silver coins then the robe and then the gold brick. 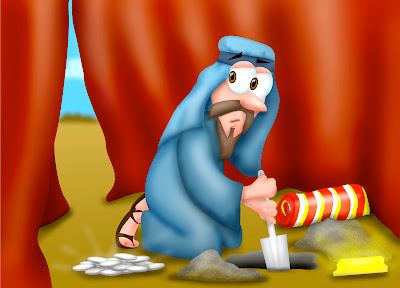 "How would anyone ever know?” He thought to himself. “There was more than enough for the treasury.”

Sometimes we do something wrong because we know that there is no way we could be caught. But that is wrong thinking. For one thing, God sees everything. Even if our parents or anyone else doesn’t see us.... God does. Secondly, when we obey, because it is the right thing to do, it builds our character. The more we build our character, the stronger we get. The stronger we get, the easier it is to fight temptation and do the right thing.
And thirdly, The Bible says that your sin will be found out sooner or later.

Everything was going well for the Israelites. A small city named Ai (even their name is small) was next between them and the promised land. Joshua sent only a few thousand men to defeat the city since it was so small. But Ai defeated the Israelites, killing 36 of them and sending the rest running back to camp. Joshua fell on his face before God and cried out. “Why God? We defeated the great city of Jericho without a single life being lost, then we lose 36 men to a small town! Why?”
God answered. “It is because one of your men has sinned. He has taken some gold and silver from Jericho for himself. It is because of this that I was not with you in Ai.”

Joshua knew that he had to find out who did this thing that ended up killing 36 men so he called everyone out of their tents. All the soldiers and their families gathered before Joshua. He said that there was sin in the camp. That someone had taken some of the gold and silver instead of putting it in the Lord’s treasury. There were a lot of people there.  Achan probably thought to himself that they will never find him out. We will find out next time if he’s right.
So we can see a couple of things.
(1) God is faithful.(He protected Rahab and her family in a miraculous way.)
(2) God is all seeing. (He saw Achan stealing the gold and silver. He sees us when we do wrong or right)
(3) God desires our love and obedience. (Obeying God is how we tell Him that we love Him)

Posted by MrBibleHead at 5:14 PM 2 comments:

After all the Israelites crossed the Jordan River and the water flowed normally again, the Israelites stood on the outskirts of the promised land. They were amazed at all the fruits and vegetation as far as the eye could see! The next morning they woke up to gather the manna. Guess what? The manna stopped! After covering the ground every morning (except Sundays) for forty years, God stopped the manna. Why? Because the land was full of fruit, vegetables and wheat. The Bible refers to it as a land flowing with milk and honey. But now the Israelites were going to have to work for their food. They had to gather, chop, cut, mix, and cook. God gave them what they needed in the desert because they had nothing and could do nothing. Now He has blessed them, but He wants them to do for themselves what they can do. 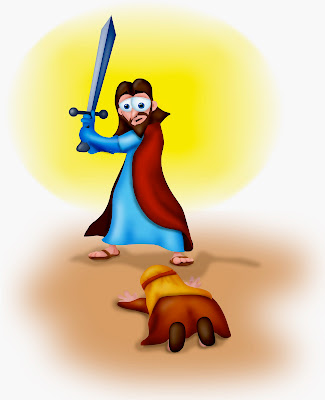 Have you every prayed for something and then waited for God to do it?  Maybe God is waiting for you. God gives us a brain and hands and feet for a reason. Don’t pray for answers to a test, when God gave you the ability to study. Pray about studying. Our ability and capabilities are God’s blessings. Do your BEST and then pray that God does the REST.
So Joshua was leading the people toward Jericho when he was confronted by a man wielding a sword.
“Are you a friend or an enemy?” Joshua asked.
“Neither.” Answered the man. “I am the commander of the Lord’s army!”
At this Joshua fell on his knees to worship. He knew it was Jesus!
Then the Lord told Joshua. “ I have already given you the city of Jericho. Do what I say and you will be victorious.” He continued. “ I want you to have your entire army march around the city every day for six days. Seven priests blowing horns and other priests carrying the Ark of the Covenant will lead the way. On the seventh day, march around the city seven times. Then the priests with the horns will give one long blast. At this point, have all the people shout! The walls will come down and you will be able to take the city. Just remember that all the silver and gold is to be taken and put in the Lord’s treasury.
Do you think that this was an unusual way to capture a city? Me too! Why would God ask them to do something that sounded so crazy? A couple of reasons. (1) God wants everyone to know that He did it. (2) God wants the people to obey Him. (3) God wants the people to trust Him. Because when we trust God and obey Him, and see Him at work because of it, our faith gets stronger. 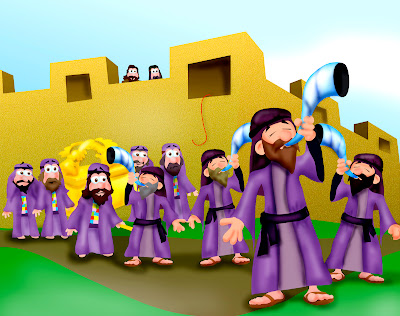 So Joshua gathered all the people and told them what the Lord had said. He warned them about not taking any of the gold and silver for themselves. Joshua also told them to make sure that Rahab and her family were brought out safely. Remember Rahab? She was the lady that took care of the Israelite spies when they were hiding from the Jericho soldiers. The spies promised safety for her and her family when they took over, if she hung a red rope from her window. Joshua remembered the promise and reminded the Israelites to take care of her and any family members in her house.
The Israelites were ready to go. They approached Jericho and marched around the wall with the Ark.  The priests with horns in the lead. The people were quiet. The sound of the horns was all that could be heard for six days as they marched around the city once a day.
The Israelites got a pretty good look at the wall as they marched around it. The wall was 11 feet high and 14 feet thick! Once in a while, one of the people from Jericho would peek over the wall to see if the Israelites were still out there. The city of Jericho was terrified! Rahab and her family waited patiently as they were gathered in her home, which was built right into the wall, the red rope hanging from her window. On the seventh day, the priest gave a loud long blast from their horns and all the Israelites gave a might shout!
Next time we will find out what happened. Would God keep His promise? Would Rahab and her family be safe? We will see.
A few things we learned from these chapters.
(1) God wants us to do what we can do, the He will do what we can’t do.
(2) God works in unusual ways so that He gets the glory.
(3) God tests our obedience.
(4) God tests our faith
(5) God works through us when we obey and trust.
(6) When we obey and trust our faith gets stronger.

Posted by MrBibleHead at 2:02 PM No comments: