David makes some bad choices and sins against God (2Samuel:11) 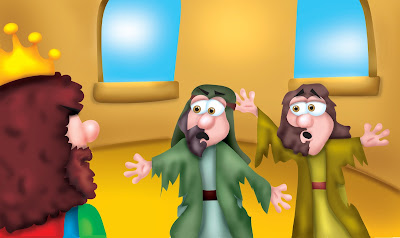 Some time after David invited Mephibosheth to live on the palace grounds, King Nahash died. King Nahash was a leader in Ammon and a friend of Israel so King David sent some ambassadors to pay their respects. Hanun, who was King Nahash's son and now king, was a little paranoid and thought that David's men were there to spy on him and eventually conquer the city. King Hanun had his men cut off half of the beards of David's men, cut their robes to shreds and sent them back to David.
David was furious! He summoned his general, Joab, and gathered his troops. The whole Israelite army marched toward Ammon and a huge battle ensued. Some neighboring armies joined forces with the Ammonites, but after many of them were killed in battle,they retreated and the Ammonites were left alone to fight Israel. Winter quickly approached and the battle between Israel and Ammon was put on hold till the spring.

Up until now, we have seen all the good things that David has done and how he trusted God, now we come to a section of the Bible that shows that David made mistakes, just like we do. In this chapter, David will make some bad choices. Aren't you glad that the Bible doesn't sugarcoat everything? We see how real the people are, and how we can relate to many of their struggles.

The following spring, the war with the Ammonites resumed. But David told his general, Joab, "You go fight the Ammonites. I think I will sit this one out and just hang around the castle. So Joab took the Israelite army and marched off to war, while David stayed behind. One day David spent the morning walking the halls of the castle killing time. By afternoon he was so bored that he decided to take a nap. When he got up from his nap, he took a stroll to the rooftop to look over his kingdom. He 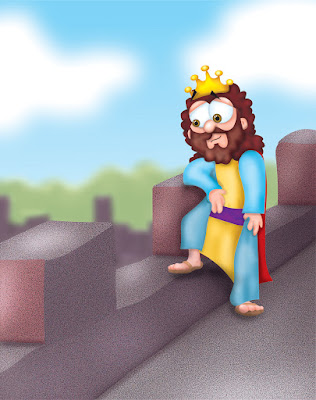 noticed a beautiful woman taking a bath on her rooftop a few blocks away. He called one of his servants to find out who she was. "She is Bathsheba, wife of Uriah who is fighting the Ammonites with General Joab as we speak." The servant answered.
David sent for her and when she arrived at the castle.... David fell in love.  Soon afterward Bathsheba was going to have a baby. David didn't want her husband to find out that he had been with her, so he sent a message to General Joab to put Uriah in the front line of the battle, then pull back all his men so that Uriah would be killed. Joab didn't like the idea, but he followed his king's orders and Uriah was killed.
When Bathsheba heard that her husband had been killed, she mourned. When the mourning period was over, David sent for her. She became his wife and the she gave birth to a baby boy. Then the Bible says this one thing at the end of Chapter 11 of 2 Samuel in verse 27.... but the Lord was very displeased with the things that David had done.

Even though the Bible describes Davis as "a man after God's own heart", he was still just a man.... and all men have fallen short of the glory of God. (Romans 3:23) Next time we will see that David has a choice to make. Turn from God.... or turn from his sin.

Did you see how one small choice David made to stay home instead of going to war snowballed into many many bad decisions? One of David's main purposes that God had for him was to build up Israel by finishing the battles that Joshua had begun years earlier. By staying home when he should have been out to war, David gave the devil an opportunity to lead him astray. If David had been out to battle, he would have never taken an afternoon nap, seen Bathsheba and eventually had Uriah killed.

We can learn a huge lesson. Be all about what God has for you. Pray and study the Bible. God will reveal what He has planned for you. Then get out there and do something for God.  Don't let the devil have an opportunity to use your idleness to sin against God.
Posted by MrBibleHead at 1:16 PM No comments: