Like we said last time, after Gideon died, the people went back to their old ways. They began worshipping Baal and living wicked lives. Why would the people worship a wooden statue? Because a statue doesn’t expect much. The people wanted to do their own thing and they knew that God would require obedience and sacrifice.  Here is an example of just how wicked their lives had become.
Believe it or not, Gideon had 71 sons! After he died, the sons took over as the leaders of the Israelites. One of his sons, Abimelech, wanted to be the ruler all by himself. He went to the town that his mother was from (Shechem) and persuaded the people there that it would be better for them if he were their king. The people agreed. The town took up a collection from the Baal Temple for Abimelech and he spent the seventy silver coins that they gave him on some soldiers.
Abimelech took his soldiers to his fathers house and killed sixty-nine of his brothers. One of his brothers named Jotham escaped. 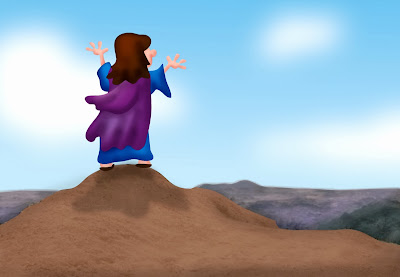 Jotham climbed to the top of a mountain and shouted to all the people of Shechem. “If what you did by making Abimelech your king, is pleasing to God, may you find joy and peace while he is your king. But if what you did is dishonoring to God and to the name of Gideon, who defeated the Midianites for you, then may your time under Abimelech’s rule be filled with sorrow, pain and unrest.” Then Jotham went and hid because he knew his brother wanted to kill him.

After three years, God decided it was time to stir up some trouble between Abimelech and the town of Shechem. The whole town began to badmouth the Abimelech. But he had spies in the town. They reported back to him what was happening. Abimelech knew that it was a matter of time before the whole town would revolt against him, so he wanted to make the first move. He took his army and stationed them outside the Shechem city limits.  The men of Shechem were no match for Abimelech and his men and when they came out defend their city many of the Shechemites were killed. The rest ran back and told the people to hide in the temple. Abimelech told his men to gather some branches. They laid the branches at the base of the temple and burned it down, killing the people in it. The rest of the people ran to the center of town where there was a huge tower. They took refuge in it, but Abimelech told his men to get more branches. He laid the branches at the base of the tower and has Abimelech was leaning over to start them on fire, a woman dropped a brick off the roof of the tower. It landed on Abimelech’s head, crushing his skull.
Abimelech was barely alive. “Take your sword and kill me!” He told one of his soldiers.. “I don’t want it known that a woman killed me.” So the soldier finished him off. 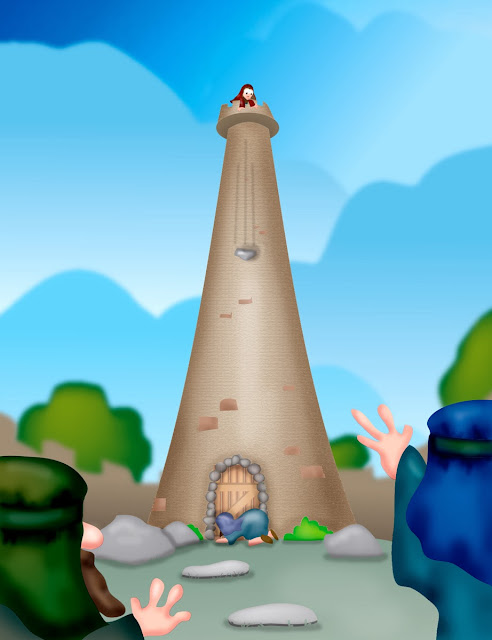 God punished Abimelech and the town of Shechem for murdering Gideon’s sons. (Judges 9:56&57)

The Israelites went through several more judges (rulers), but they continued to turn their backs on God. God grew angry and took His hand of protection off the Israelites and they fell into the hands of the Philistines and became their slaves for forty years. Do you realize that God’s hand of protection is upon you and me? Our lives are so fragile! God is the sustainer of all things. Which means that He keeps everything and everyone going. 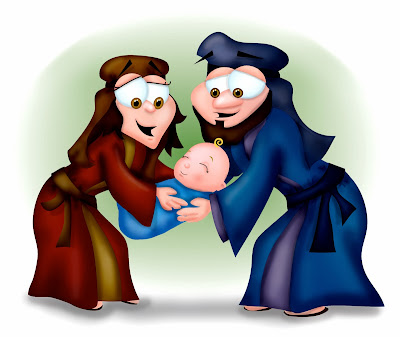 Well the Israelites finally realized how self-centered they had been living, and they cried out to God for help. God is so compassionate, caring and forgiving. He decided to raise up a judge that would rescue the Israelites from the Philistines.
God sent His angel to the wife of a man named Manoah. The couple had not been able to have children, but the angel assured them that they would have a son. The angel also said that their son must be dedicated to God as a Nazirite. (Which meant that he could never get a haircut, never drink alcohol or never touch any dead thing).
When their son was born, they named him Samson. God blessed him as he grew. His parents kept their part, and never gave him a haircut.
Posted by MrBibleHead at 1:57 PM 1 comment: 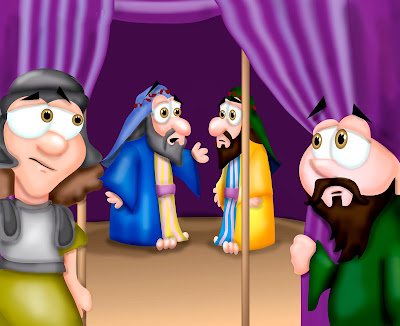 So when we left Gideon and his servant, Purah, they had gone down into the valley where the Midianite army was camped. Gideon was amazed when he saw how many of them there were! But God had suggested that Gideon listen to some of the Midianites. God knew that Gideon would be encouraged when he heard what they were saying.
Gideon and Purah reached one of the tents that was posted along the outside of the Midianite army camp. They could hear some men speaking, so they leaned in closer to listen. One of the men was telling his friend about a dream he had the night before. “ I had a dream that a loaf of barley bread came rolling down the hill and knocked a tent flat to the ground.” He said
His friend said, “ Your dream can only mean one thing. God has given Gideon victory over the Midianite army!”
When Gideon heard the dream and the interpretation, he thanked God and returned to his own camp.
“Wake up!” Gideon enthusiastically shouted. “The Lord has given us victory over the Midianites!”
Gideon divided his 300 men into 3 groups and gave each each man a ram’s horn and a clay jar with a torch in it. “Watch me and my group.” Gideon said. “As soon as we blow our horns, blow your horns and shout!” 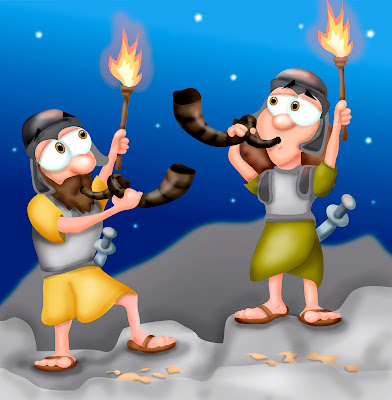 It was just after midnight when Gideon and his 100 men reached the edge of the Midianite camp. Suddenly, they blew their horns and broke their jars. They held up the torches in their left hands and shouted. When all 300 of Gideon’s men blew their horns, broke their jars, held up their torches and shouted, God confused the Midianite and they began to fight against each other!  Out of 120,000 soldiers in the Midianite army, only 15,000 survived. Gideon and his men captured them. The Israelites had won the battle! And there was no doubt that it was ALL God.
When Gideon returned to the Israelites, the people began to shout to Gideon. “Be our ruler! Be our ruler!”
But Gideon declined the position. “ I will not rule over you, nor will my son. The Lord will rule over you! However, I do have one request. You have collected many treasures from the enemies after we defeated them. Can each of you give me one gold earring and toss it into this cloak that I have laid out on the ground?”
“Certainly!" They exclaimed. “Gladly!” And each person tossed a gold earring onto the cloak. When the last earring was collected, it added up to 43 pounds. Gideon took the gold, melted it down and had it made into an ephod. An ephod is a protective garment, like a chest protector that the priests wore. Gideon wanted something to remind the people about the protection of God, but the Israelites began to worship the ephod instead of God. 40 years later, Gideon died and the people went back to worshipping Baal. Remember when we first began the story of Gideon? Baal was the god that the Israelites were worshipping. Gideon led the people away from Baal and toward God. But when he died. the people went back to their old ways. They were really following the leadership and confidence of Gideon, instead of really following God. 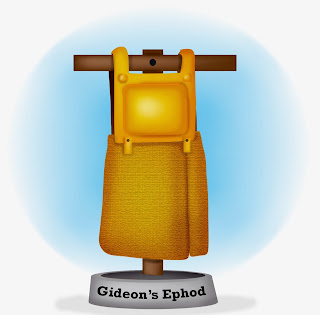 God has put leaders in our lives. Preachers, pastors, teachers etc.... But they are just human beings. As we learned before, all human beings fall short of God’s glory. (Romans 3:23) We should never be a “pastor follower” or a “teacher follower”. We should be a “Jesus follower” because he is the same yesterday, today and tomorrow.(Hebrew’s 13:8)  He is without sin (Hebrews 4:15) and He loves us. (John 3:16)
Here is an interesting fact about the Bible that is perfect for this lesson.
- Psalm 118 is in the center of the Bible. There are 594 chapters before it and 594 chapters after it. If you add them together, it comes out to 1188. The center verse in the Bible is Psalm 118:8. Isn’t that cool? And here is what that verse says. “It is better to trust in the Lord than to put your confidence in men.”
God works through people...so don’t stop listening to your pastor or learning from your Sunday school teacher. They are like signs along the road of life, pointing to God. They are not your heart’s destination. Jesus is :)

Posted by MrBibleHead at 6:22 PM 5 comments: