The next morning after the spies returned home and reported that the people of Jericho were paralyzed with fear, Joshua led all the people down to the banks of the Jordan River. The promised land was on the other side of the river, just past the city of Jericho. The Israelites couldn’t wait to cross the river. However it was flood season. The river was higher than usual. The people were sure they could make it across, but they had to go right away because the river was getting higher and higher each passing day. But God told Joshua to wait three days!

Have you ever prayed about a solution or an answer to a problem, but the thing you prayed about got even worse? God’s timing is perfect. Sometimes God allows things to get worse so that He can demonstrate His power even more, so that there is no doubt that it was Him!

Three days later, the people stood at the banks of the much deeper and wider Jordan River. The only two people that were present when God parted the Red Sea were Joshua and Caleb. Everyone else had died in the desert. I’m sure the israelites heard about it from their parents and grandparents, but they were probably wondering if God would do the same for them. 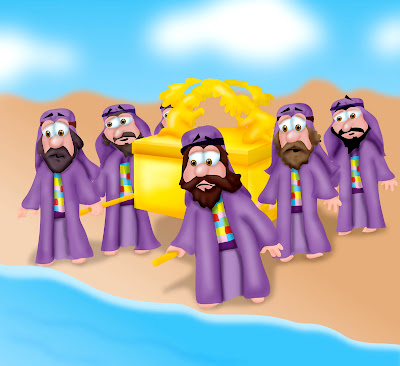 The Bible says that God is the same yesterday and today. (Hebrews 13:8) If your parents or grandparents are believers in Jesus, ask them what God has done in their lives. I’m sure He has done some amazing things. And I’m sure that they would love to tell you. Guess what? He can do the same thing for you too. God wants us to share our “God” stories. 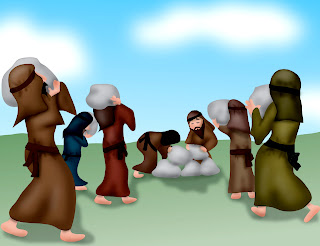 Now why did God want them to do that you may ask. Well, God tells us why in the Bible. In Joshua chapter 4, verses 6 and seven,  He says. “Do this as a memorial so that, in the future, when your kids ask you what those stones mean, you can tell them how I did an amazing miracle.”

While the men were building the memorial, Joshua went and built his own memorial right in the middle of the Jordan river. You are probably wondering what good that will do. Right? Since as soon as the water flowed back into the river, the memorial would be under water. That is true, but during a draught, when the water level was low, the memorial would be visible. Then the people could remember that God controlled nature when he parted the river. He controls the rainfall as well. God likes us to remember what He does for us. He likes us to remember the past so that we can trust Him in the present.
When Joshua was done building the memorial, the men with the Ark of the Covenant crossed the river.
Then the water flowed back and filled up the river.

I like to write down on little pieces of paper the things that I am praying for, and when God answers the prayer. I put it in “the answered prayer jar.” It really builds my faith when I look at that jar filled up with all those answered prayers! It’s a great way of remembering what God has done for me. 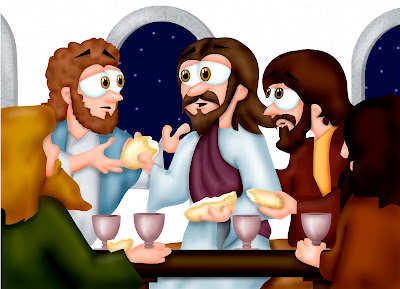 One week from today is the Thursday before Easter. It is the night that Jesus had the last supper with His apostles. The reason I mention this, is because Jesus took the bread and gave it to the apostles and said “Do this in remembrance of me.” Jesus wants us to remember that He suffered and died to pay the price for our sins. This Easter remember what Jesus did and have a Happy and blessed Resurrection Sunday!
Posted by MrBibleHead at 8:37 PM 2 comments:

So now Joshua is leading the Israelites into the promised land. The Israelites are camped out on the other side of the Jordan river. The city of Jericho is standing between them and the promised land. The king of Jericho can see all the Israelites on the other side of the river and he is a little nervous. After all, the Israelites have been conquering every city in their way. God has given them victory after victory.
So Joshua picks two men to secretly cross the Jordan river and spy out the city of Jericho. The two spies need a place to hide, because somehow the king heard that they were there checking out Jericho. The spies came to the house of a woman name Rahab. Her house was built right into the wall that surrounded the city. Rahab was a woman who had a bad reputation. She did a lot of bad things, but now she was trying to turn her life around. The city of Jericho had turned their backs on God and Rahab didn’t even know where to turn to get her life right with God. When the Israelite spies showed up at her door, it was her opportunity to do the right thing.

Have you ever got yourself into a lot of trouble when you disobeyed or lied? Sometimes it just seems like it keeps getting worse and worse. God wants us to think about doing the next right thing. One right thing and then another. God will give us opportunities to do the right thing. If we do, He is faithful and He will bless you. (James 1 22-25)

Rahab hid the spies because the king’s men knew that the spies were seen at her door.  The soldiers searched Rahab’s house but didn’t find the men. Rahab had hidden them on her roof under some hay.
“I didn’t know that they were Israelite spies.” Rahab said. “They left and went toward the hill country. The city gate is just about ready to close. If you hurry you may be able to catch them.” 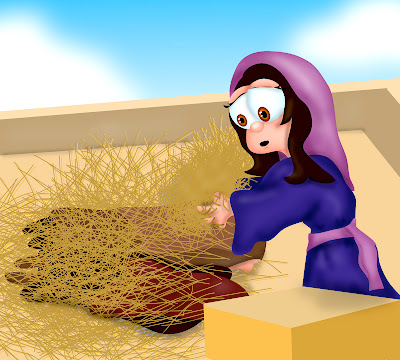 The soldiers bolted to the hill country. They made it to the city gate just before it closed for the night. Then Rahab went up to the roof to check on the two Israelite spies.
“I know that God has promised you this land. The people in Jericho have all heard about how you crossed the Red Sea on dry ground and how you defeated armies that were larger than you.” Rahab continued. "The people are so terrified of you that they freeze at the mention of your name!”
The two spies asked her why she helped them. Rahab answered. “I know that it was your God who parted the Red Sea and defeated the armies. Your God is powerful and mighty. I am hoping that by helping you now, you will spare me later when God gives you this city.”

Rahab was smart. She saw God working in the Israelites. She wasn’t afraid of the people. She feared God. The bible says that “the fear of God is the beginning of wisdom.” (Proverbs 9:10)  Have you ever
done something so that someone will like you, even though you knew it was wrong. I have too. When we do that, we are more afraid that someone won’t accept us than we are afraid of God’s anger. That is not too smart.

Rahab hung a rope out the window so that the two spies could escape. Before they left, they assured Rahab that she and her family would not be harmed if she gathered them all in her house and hung this red rope from her window. So she let the spies down with the rope and they hid in the hills for three days and returned to Joshua telling him that the people in Jericho were terrified of them. 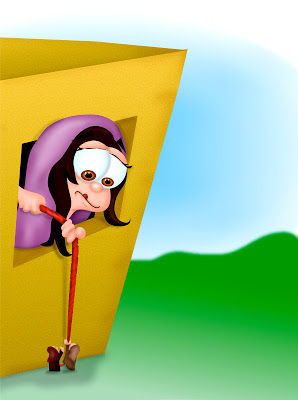 The red rope hanging from Rahab’s window was a symbol of how Jesus’ blood saves us! Jesus shed His blood to save us from the punishment of sin, if we trust in Him. (1John 2:2)  Rahab trusted that the red rope would save her and her family. 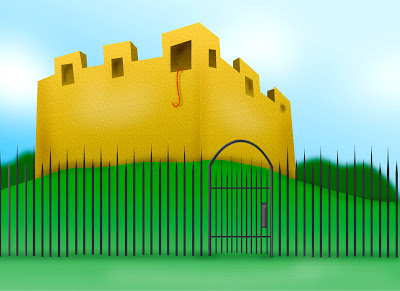 Have you trusted your life to Jesus? Have you asked Him to come into your heart and be your Lord and Savior?  If you say a prayer something like this (and mean it in your heart) God WILL save you:

Father God, I know that I am a sinner. I believe that you sent Jesus to suffer and die for my sins. I  make Jesus the Lord over all my life and I accept Him as my Savior. Thank you God. Amen
If you prayed a prayer like that and meant it in your heart...Guess what? The angels are celebrating in heaven because someday you will be joining them up there...FOREVER! (Luke 15:10)
Posted by MrBibleHead at 7:40 AM No comments: