While Judah was pleading for his brother’s life before Joseph, Jacob was back in Canaan wondering why it was taking his 11 sons so long to return from Egypt. He was so afraid that something had happened to them, especially his youngest son Benjamin.
Last time we saw that the brothers had left Egypt with the food they bought. They were on the way home. They were stopped by guards and returned to Joseph, the ruler of Egypt, because the king’s silver cup was found in Benjamin’s traveling pouch.  Joseph said that all the brothers could leave except Benjamin. This is when Judah started to plead for Benjamin’s life and offered to take his place in prison if Joseph would just let Benjamin go back to his father. Judah had promised his father that he would not let anything happen to Benjamin. 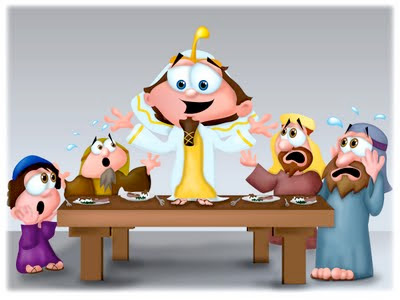 Judah’s heart for his brother, and his sincerity at keeping the promise to his father really touched Joseph. His eyes began to tear up. He sent all his servants and attendants out of the room and began to cry in front of his brothers. He cried so loudly, that his servants heard him outside the door. Joseph’s brothers were terrified. "Now look what you’ve done Judah!” One of them shouted.


“No no, you don’t understand,” said Joseph through his sobs. “I am your brother Joseph!”
All 11 of the brothers were speechless. They stared at Joseph in disbelief!  "It is me! Don’t you believe me? Remember when you threw me in the pit and were going to leave me there and then a few merchants came along. You decided to sell me instead.”
The brothers realized that this WAS Joseph. Now they were really terrified. "Joseph will take revenge on us and we will die here in Egypt!” Whispered Reuben to the others.

Joseph overhead Rueben. “God is so amazing! What you meant for evil, He used for good. Now I am in charge of all the food in the land. There will be another five years of famine (no rain for the crops and animals) . If God had not brought me here, our entire family line would have died of starvation!” Joseph continued. “So don’t be afraid, I brought you here to forgive you!” With that Joseph went over to his little brother, whom he had never met and gave Benjamin a great big hug! 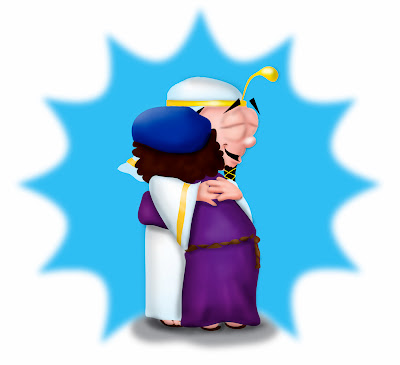 The brothers all broke down and wept. “After all we had done to Joseph, he still forgives us. We don’t deserve such love!”
“Go get your father and all his belongings and move him here to Egypt so that you will be near the food and that I may spend some time with him,’ said Joseph as he wiped away his tears. So the brothers did what Joseph said. What a wonderful reunion Joseph and Jacob had!

Forgiveness can be so hard sometimes. Have you ever had to forgive someone?  God asks us to forgive others, just as he has forgiven us. Jesus even forgave the people who nailed him to the cross!
Forgiveness is not excusing someone’s bad behavior. It is letting God take care of it. We may not see God doing anything, but we can trust that he is or will. Why does God want us to forgive? To make us miserable? No. Just the opposite. God cares for us. Holding a grudge against someone plants the seed of bitterness in our heart. The longer it goes.... the more bitter we become. Forgiving is more about our own well being than the other person.
Have you ever had to carry something very heavy? Try this. Carry about 5 books around the room. Now add another and walk around the room again, now add another. Thats how it is when we don’t forgive. It gets heavier and heavier on our heart. Now put the books down. Doesn’t that feel great! A weight has been removed. When we forgive. A weight is lifted from us.  Now we don’t spend all day thinking about what the person did to us or we don’t  think about revenge all the time. We are free to enjoy the life that God gave us and spend more time with Him.
Posted by MrBibleHead at 9:07 PM 2 comments: