Against All Opposition, The Wall Is Completed (Nehemiah 4-13) 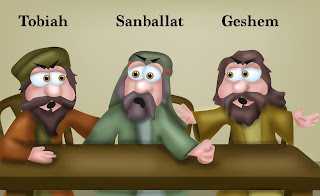 As soon as I, Nehemiah, had assigned each person or family a section of the wall, they immediately began construction.  And as soon as Sanballat, Tobiah and Geshem saw that the people were beginning to build, they became furious. "We have already tried to discourage them." Geshem said.
"Yes, Nehemiah prayed and talked to the people and they were not discouraged." Tobiah added.
"We need to get others on our side." Sanballat said as he pounded his fist on the table.
So the three men went to a section of the wall that we were building. I could see they were up to no good as they stood among a crowd of onlookers and began to make fun of us, hoping the others would join them. Tobiah pointed and shouted, "That wall is so weak that if a fox tried to walk along the top of it, the wall would crumble to the ground!" I prayed that my people would ignore the comments and that the crowd would not go along with Tobiah. And so we continued to build the wall.
After a few weeks, the wall was about half complete. Saballat, Tobiah and Geshem were fuming! They sent messengers to the wall and handed me a letter. Here is what it said. "We have the Arabs, the Ammonites and the Ashdodites on our side. If you do not cease in your attempt to rebuild the wall around Jerusalem, we will attack." I prayed to the God of heaven that the threats were only just threats and that God would give me wisdom. So I stationed half the men as guards with shields and swords along the wall and armed the men that were working  on the wall with swords as well. 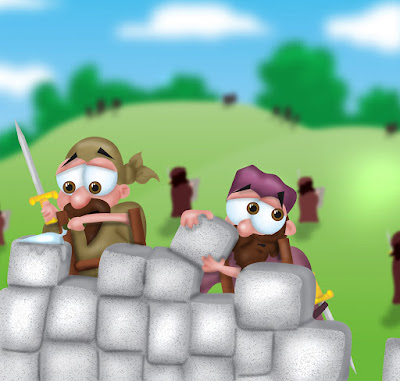 The three evil men saw that we were not deterred. Progress on the wall continued and the they devised another plan. Again they sent messengers and handed me a letter. Here is what that letter said. "It has come to our attention that you are building the wall in order to rebel against your king in Persia and then name yourself as king over Jerusalem. If you do not stop construction of the wall immediately, we will inform the king of Persia of your plan and he will have you arrested and the people charged with treason." I sent a message back saying it was all lies and then I prayed for strength. Then we continued to build.
We finally had the wall up, but still had not put up the gates and doors, which were important to secure the city. Sanballat, Tobiah and Geshem knew they had one last chance. They managed to bribe a man I knew named Shemaiah to try to trick me into meeting him inside the temple. I prayed, and God revealed to me that Shemaiah was working for Tobiah and Sanballat in order to discredit me. We continued to work on the wall. We hung the gates and doors. The wall was complete. And in only 52 days! The neighboring countries became fearful because they knew it was impossible to complete a project that would normally take a few years in only 52 days, and that God must be on our side. They were right! 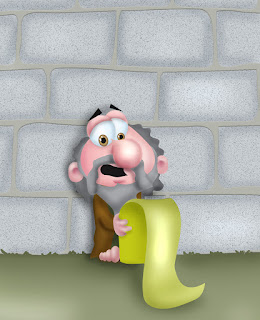 I called the prophet Ezra to read the law of God in front of the wall. Then the Levites reminded the people about how God was with us. Not only in the building of the wall, but throughout our history. From Abraham to Moses to the promised land until now, God has been with us the whole way. The people began to weep and confessed their sins. Then they made a vow to love God with their whole body, soul strength and mind, and to obey Him. Then we dedicated the wall to the God of heaven and rejoiced with songs, music, dancing, praying, worshiping and praising our God.
I became governor of Jerusalem for 12 years the finally returned to king Antaxerxes. He was very happy to see me. I shared stories with him about how God has inspired, protected and been with us. I don't know if he realized that I would be gone for 12 years when I first left, but he received me back with open arms and he let me return to Jerusalem for a visit whenever I wanted. On one return visit, I found out that Eliashib the priest had emptied out one of the temple rooms and rented it to Tobiah for some of his personal belongings. As soon as I found out. I threw all of Tobiah's things out of the temple and replaced Eliashib with a Levite, a scribe and a priest, I knew all three men and trusted them. I also found out that some of the people and merchants were not honoring the Sabbath day. Before I returned to Persia, I prayed and then implemented some new rules.
During the building of the wall, something that God inspired Nehemiah to do, there was so much opposition. There was an attempt to discourage the workers and they were made fun of, threatened, lied to and tricked. Notice what Nehemiah did each time. He prayed, then he planned and then he pushed forward. We should remember these three Ps when we are doing things for God and opposition arises (and it will). Pray, Plan, Push forward. God is on our side when we are called according to His purpose. He will guide you, protect you and give you wisdom.

Posted by MrBibleHead at 5:00 AM No comments:

Nehemiah Goes Back to Rebuild the Wall (Nehemiah 2-3) 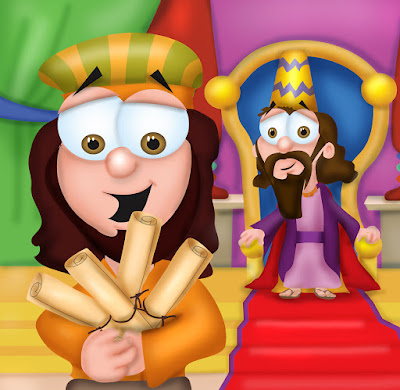 Last time Nehemiah was before the king of Persia, asking for permission to go to Jerusalem to rebuild the wall around the city. It was a request that could have landed him in the dungeon or put to death. Let's return to the story and let Nehemiah continue to tell you in his own words.

As I stood nervously before Antaxerxes, the king of Persia, he turned to his wife the queen, then back to me and said, "Yes, Nehemiah, you can go back to the land where your ancestors are buried and rebuild the wall."
I had found favor in the eyes of God, and thus in the king's eyes as well. So I continued my request. "If it pleases the king, I will be traveling through many territories on my way to Jerusalem, can you write letters to the governors of those territories giving me safe travel through their lands? And also can I have permission to bring along the lumber I will need from the royal forest?" The king granted me these things, for God had touched his heart. The king also sent along some of his army and horsemen to protect me along the way! Isn't that just like God to urge the king to give me far more than I had asked or even hoped for? (Ephesians 3:20)
So I set out on the 800 mile journey from Persia to Jerusalem. No one knew my purpose, for I had not mentioned it to anyone except the king. However, three men, Sanballat from Horon, Tobiah from Ammon, and Geshem the Arab heard that I was on my way to help the Jews with something and they were not very happy. 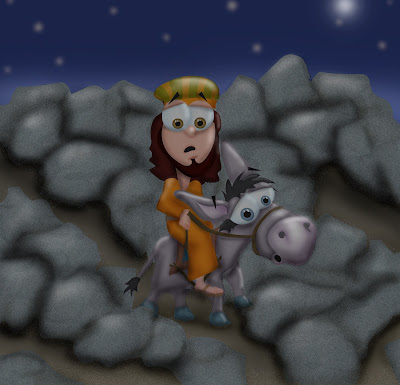 Three days after arriving in Jerusalem, (I still had not mentioned to anyone, not even the city council why I was there) I  took a couple men with me and slipped out one night after dark to survey the area around the city where the wall once stood.  The rubble was so treacherous in some places that even the donkey that I was riding was unable to navigate it and I had to go around those areas.
As I lay in bed that night, praying for wisdom (James 1:5) and contemplating the task before me, I worked out a wall reconstruction plan in my head. So by the time morning had arrived, I called all the city councilmen to a meeting. I told them about how God had put it in my heart to build the wall, how God had touched the heart of the king, and the plan God had given me to build the wall.

When God has something for you to do, He won't leave you hanging. He will be with you every step of the way. Continue to pray, ask for guidance and wisdom. God promises to  be your guiding light (Psalm 119:105) and to give you the wisdom to carry out His will.

The councilmen replied all at once. "Good! Let's rebuild this wall!"  They were excited to begin and so was I, so we started to rebuild immediately. It wasn't long before Sanballat, Tobiah and Geshem heard what we were doing. The scoffed and hurled insults and tried to discourage us, but I told them that God was with us and the wall would be rebuilt. Of course they didn't like my response, but it was the truth.
Being in charge of the rebuild, I designated the men to work on different sections of the wall, and I had each family rebuild the part of the wall that was behind their own home. I knew this would save time and the men would make sure that the wall was built well near their homes. Everyone pitched in to help. Even the priest help build a part of the wall. The work was running smoothly.... but then...

Posted by MrBibleHead at 10:12 AM No comments: