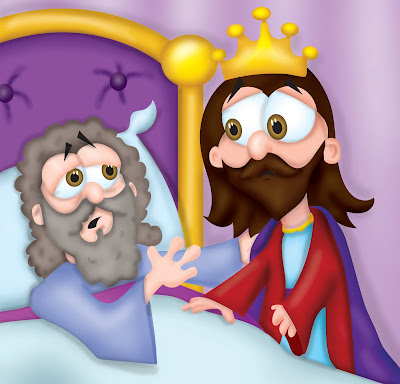 So Solomon secured his seat on the throne as king of Israel. David was getting very sick and called for Solomon to be at his bedside. David had some advice about being king for Solomon. Now, I would think that his advice would deal with the King's treasury or who not to trust and how to maintain power, but David didn't address any of these things (directly). He told Solomon to obey God and listen to His commands. David knew that if Solomon would obey the commandments and if he put God first in all things, that all would go well for him.  Put first the kingdom of God and all these things will be added onto you. (Matthew6:33)

Soon afterward, David died. David was king over Israel for a total of 40 years. Now Solomon was on his own. Remember Adonijah, another one of David's sons, from last time? He ran to the temple and grabbed ahold the horns of the altar and asked for mercy and Solomon spared his life, even though Adonijah had tried to make himself king. Well Adonijah was at it again. He tried to use Solomon's own mother, Bathsheba, to trick Solomon into relinquishing his kingship, but Solomon saw right through Adonijah's plans and had no choice but to have him executed.

One evening after making many sacrifices to God, the Lord appeared to Solomon in a dream. "What do you want?" The Lord asked him. "Whatever you ask, it will be given to you." Most people would have asked to be rich or to live a long life or for revenge on their enemies. But.... King Solomon answered. " I am a very young man (He was 20 years old at the time) and I don't really have the wisdom to rule your people. Please give me the wisdom I need to be a fair and just and good king."
God was very pleased with Solomon's answer. Solomon was thinking about how to take care of
God's people rather than focusing on himself.  God told Solomon that since he didn't ask for gold or long life or any other selfish thing, that He would not only give him wisdom, but also wealth beyond his imagination, and He told Solomon that he would live a long life if he obeyed the commandments.
Now to Him, who is able to do far more than we ask or even imagine (Ephesians 3:20)
We can learn a very valuable lesson from this chapter in Solomon's life.  God blesses us so that we can be a blessing to others. He works His good through us so that others will be blessed, AND so that we will be blessed in the process! God is so amazing!! And God will generously provide all you need. Then you will always have everything you need and plenty left over to share with others      2 Corinthians 9:8 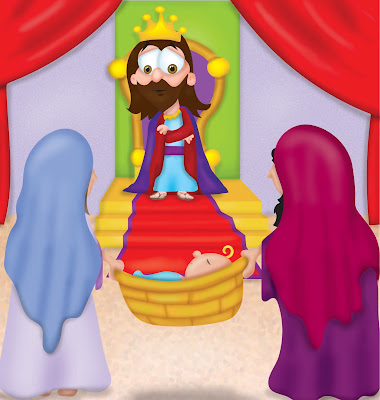 It didn't take long before Solomon was given an opportunity to test out his newly acquired wisdom. One day two women came to the palace. They were each trying to approach him carrying the same baby. King Solomon thought to himself, "This looks very strange." When they reached the foot of the throne, each woman told their story. The first woman said, " I live in the same house as this woman. We both gave birth at the same time. There was no one else in the house at the time. This woman's baby died in the darkness of night when he was just three days old. So she took the dead baby, crept into my room while I was sleeping, and switched out her dead son for my very much alive son! When I woke up in the morning, I recognized right away that the dead baby was not my son, and I knew what this woman had done."
Then the second woman spoke. "It is as she said my Lord, however, her baby was the one who died and now she is trying to say that my son is the one that died. This is my son I tell you!"
"No! He is my son!" the women traded accusations back and forth.
"Enough!" King Solomon said. Then he repeated the story to make sure he got it right. (A true sign of wisdom. He did not want to make a decision on what he thought he heard, but on the facts. A good thing for us to remember)
OK, so what will the new king decide? How will he demonstrate the abundant wisdom that God has given him? We shall find out next time..... Or you can read ahead to 1Kings 3:23-27.
Posted by MrBibleHead at 8:36 AM 1 comment: