After the feast was over, Samuel took Saul to the rooftop where he had already prepared a bed for him. Saul still did not know what all the fuss was about. (Last time we learned that God had picked Saul as the first king of Israel)
The next morning, Samuel woke up Saul and his servant. Samuel sent the servant on his way and he brought Saul to a house at the edge of town. Then Samuel took out a flask of oil. He poured it over Saul’s head. I’m sure Saul was till wondering what was going on. He just came to this town looking for his lost donkeys!
As Samuel as anointing Saul with oil, he said. “ I have received a special message for you from God. He has appointed you as leader over the people of Israel! Now be on your way and return tomorrow for the big announcement to all the people.” 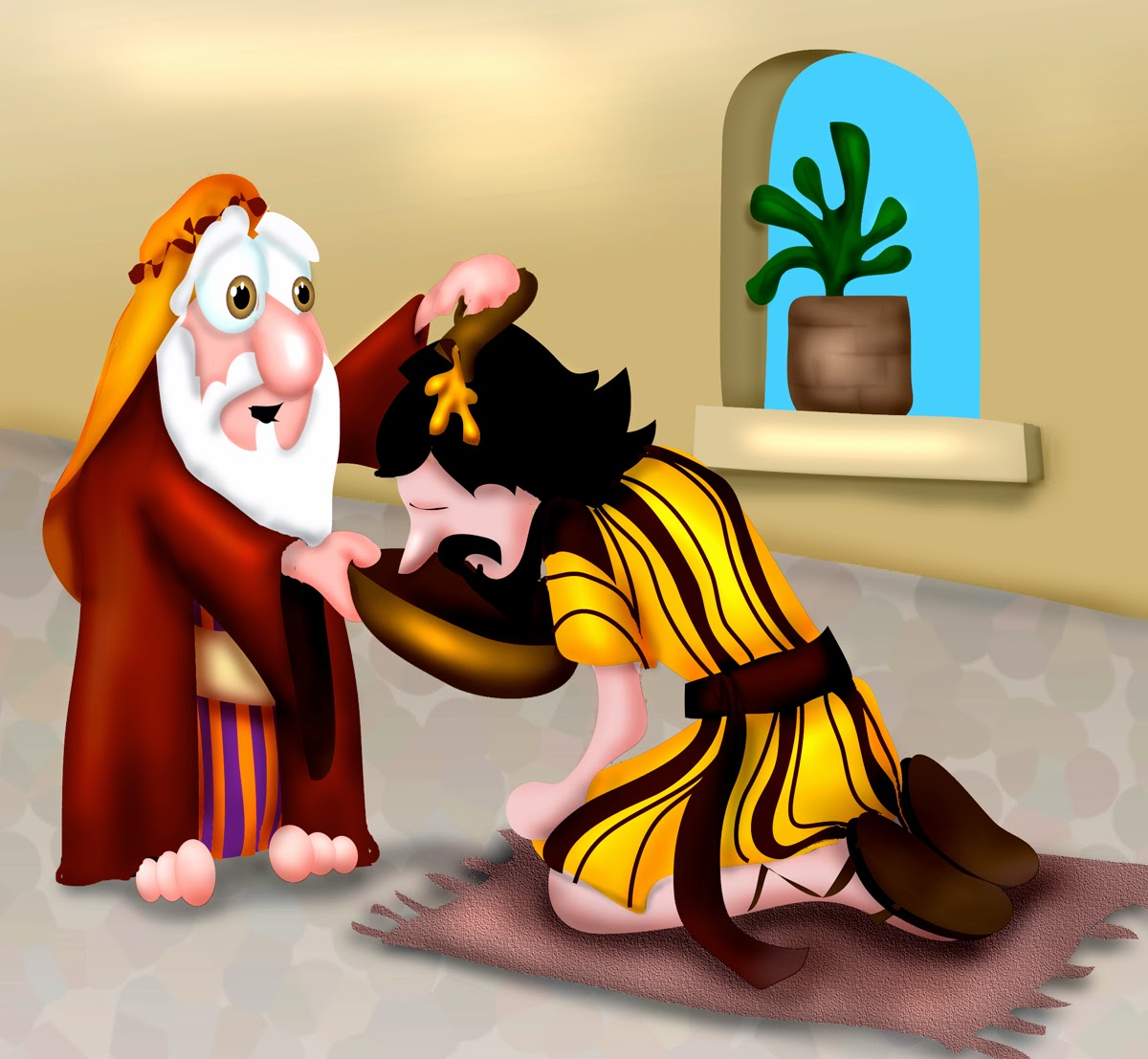 So Saul went home. The next day Samuel called all the Israelites together to introduce them to their first king ever. Samuel made a long speech about how God didn’t really want the people to have a king. And that God was their king, but God gave the people what they wanted. Finally the time came to announce Saul as the new king, but he was nowhere to be found. God told Samuel where to find Saul and he brought him out and said. “This is Saul! Son of Kish! God has chosen him and in all Israel there is no equal!”
All the people shouted. “Long live the king!”
Samuel stood next to Saul and read all the duties of the king from a long scroll. Saul was a very tall handsome man. He stood head and shoulders above everyone in Israel. The people agreed that God had picked the right man as their king. (Whether the people agreed or not, God always chooses right)
When Samuel was finished reading, he sent the people home. Saul went home too. He was still not too sure about this whole king thing. He went back to working in his fields. Many people brought him gifts and encouraged him, but of course there were a few wicked men who complained about Saul as king.

About a month later, the king of Ammon led his army against the Israelite city of Jabesh-gilead. The people surrendered to the king and offered themselves as his servants. The king said that he would return in seven day to not only take them as servants, but he said that he would gouge out every single Israelite’s right eye too!
When the word about the king’s threat reached Saul’s hometown, everyone began to cry. Saul finished plowing his field and went into town. “Why is everyone crying?” He asked. 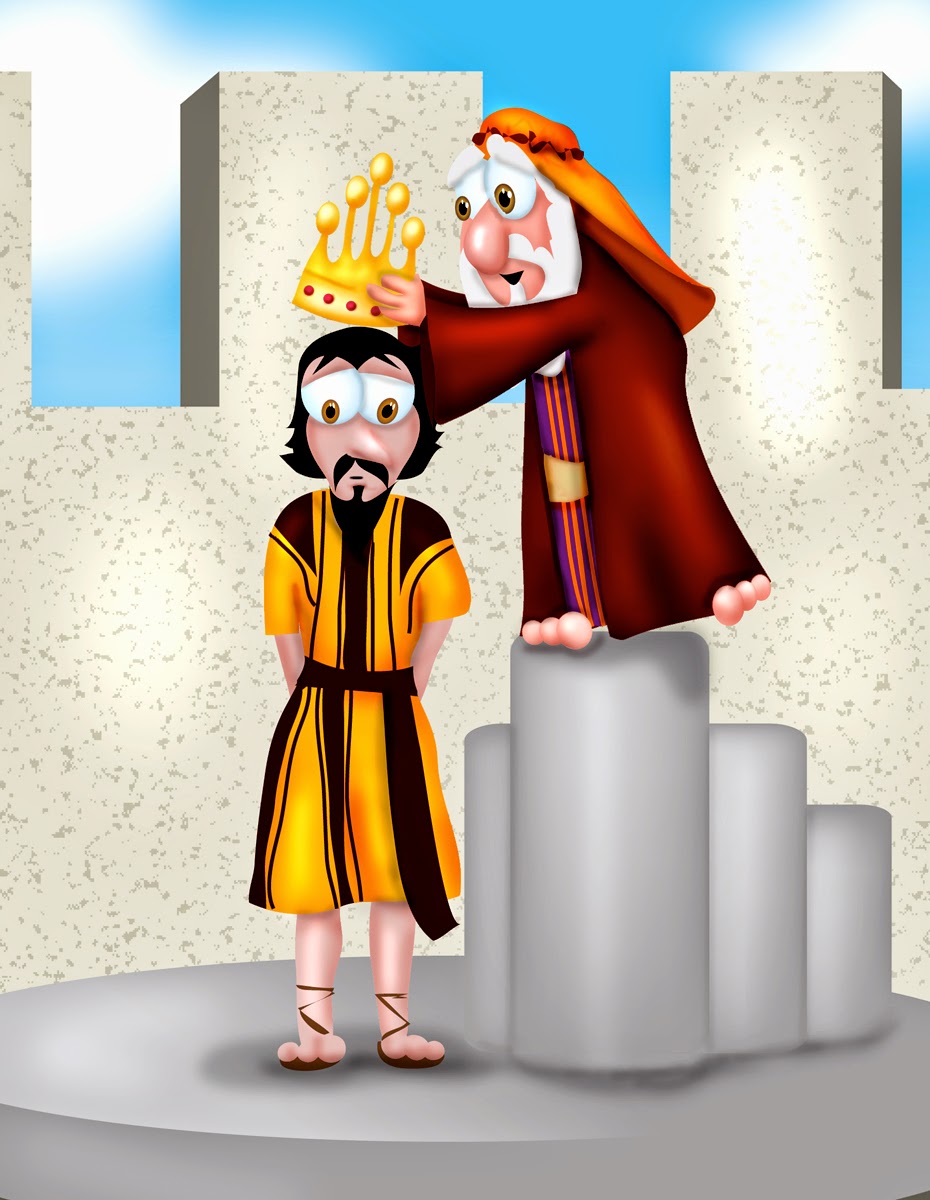 The messenger from Jabesh-gilead filled Saul in on all the details. Then the Holy Spirit came upon Saul and he knew what he needed to do. (In the Old Testament the Holy Spirit would come upon people as God saw fit. Now, because of Jesus, we can have the Holy Spirit living inside us, if we believe that Jesus died for us and we follow Him.)
Saul went around Israel and gathered 330,000 men. They launched a surprise attack on the Ammonites and defeated them completely.The people hailed Saul as king.
Samuel said. “OK now lets go reaffirm Saul as king.” So in a solemn ceremony, Saul was crowned king of Israel. The people of Israel rejoiced because they had a brave and strong king.
Samuel then made his final speech as judge over Israel. “ Now you have your king. My work as judge is done, but I will never stop praying for you, teaching you or giving you godly advice. I will continue as God’s prophet. Even though you rejected God as your king, He has given you a brave and strong king. Just remember to look to the Lord for your help and remember all the wonderful things He has done for you.”

Isn’t it amazing that even though the people rejected God as their king, he didn’t punish them. That is called mercy. Then on top of it, God picked out the best man for the job and empowered him with the Holy Spirit. That is called Grace.
Mercy is not getting what we deserve. Grace is getting what we don’t deserve. We don’t deserve to go to heaven because of our sin. God sparing us is mercy. God sent Jesus as our savior to die for us and the Holy Spirit to live in us. That is Grace. Isn’t that amazing!  Amazing Grace!
Posted by MrBibleHead at 9:46 AM No comments: